Welcome to The Week in Sexist News – Halloween Special! Bringing you the sexist horror stories that ooze and seep into our lives like that squashed carton of warm low-fat yoghurt you put in your bag and meant to have for lunch, but went and got a KitKat Chunky instead. As usual, we’ve been treated to stories of Frankenstein freakery that women inflict on themselves COMPLETELY UNPROMPTED BY OUR WOMAN-FRIENDLY MEDIA THAT IN NO WAY PROFITS FROM OUR BODY-SHAME, OR PROFITS AGAIN FROM WRITING ABOUT HOW DAFT WOMEN ARE, AND THEN PROFITS FROM PRETENDING THEY GIVE A TINY RAT’S ASS. The trick is not gagging after imbibing their ‘news’ equivalent of warm, rancid Muller-licious. 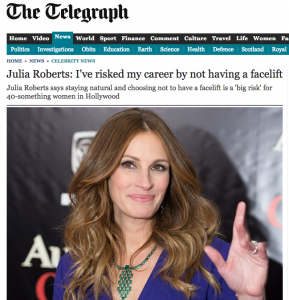 Julia Roberts is NOT having surgery to correct her inevitable decay. Yes, you read that right, a woman has decided not to have someone slice up her face at intervals until she looks like all her idiosyncratic facial features have been buffed off aggressively with a loofah. And yes. This is considered worth reporting in The Telegraph. But, at any rate, high five Jules; just a grown woman standing in front of an irresponsible and manipulative beauty culture and asking it to take all the collagen implants and shove them up its arse. 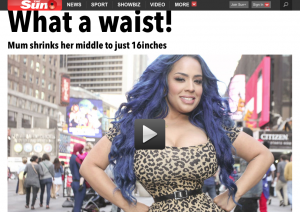 Ah The Sun, once again simultaneously celebrating and mocking a woman who is literally squeezing her body into an unfeasible shape. Since one of their chief marketing methods is spaffing massive tits at the general public on a daily basis, one can understand why they see merit in a body shape inspired by drawings of teenage wank fantasies. Such discipline is something we at Tights cannot entertain; we’re the kind of slovenly Jezebels that enjoy the shameful pleasures of comfortable pants and we only wash our fringes to save time we could otherwise spend eating or sitting around thinking of new ways to say ‘masturbate’ for this blog. The politics of fetish aesthetics aside, we do find an item of clothing that prohibits walking up and downstairs to be problematic and we can only assume these corsets come with a complimentary bungalow. Props to The Sun for meekly suggesting after a cascade of droolingly appreciative photos that maybe this isn’t all that good for you…actually it’s quite bad…yeah, maybe don’t…

#8 Linda Evangelista takes her face outside. The savage.

That’s right, this week the ex-professional model stepped out onto her own balcony without any slap on looking, according to The Daily Mail, ‘a far cry from her days as a supermodel.’ In the most confusing pseudo-appreciation article EVER, the mail simultaneously celebrated the fact that Linda was once a serious bit of wank-fodder, but mournfully acknowledged that the time has come for her to stop leaving the house. It’s only fair love, no one wants to see how the mighty have fallen. Oh and she was wearing a black sundress, yes a black sundress. A black sundress. 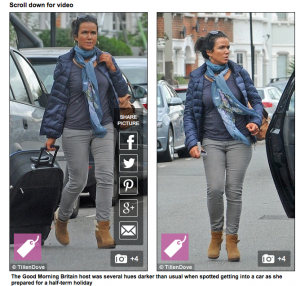 In a selfless act of public service the tabloids got their Pantone charts out this week to discuss, at length, the skin tones of Susanna Reid. ‘BRIGHT ORANGE’ screamed The Sun, ‘poor girl’ quipped Sarah Vine after comparing Reid’s face to her handbag, in the really sisterly way that only Mail columnists can do; ‘she’s several hues darker.’  After pouring over multiple images of Susanna, and a VIDEO, yes really, The Mail concluded that she did indeed look less-sunkissed in a photo once. Excellent.

The Daily Mail reported on Kimberley Walsh leaving the comfort of her own home, also known as ‘making an appearance,’ in a coat and scarf, not because it’s winter, but because she needed to hide the grotesque horror of her postpartum body. Why else do women wear clothes? 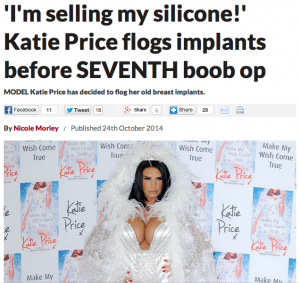 This week the Daily Star published a story of Frankensteinesque proportions: Katie Price, aka Jordan, is flogging her old tits to raise money for a breast cancer charity. Yes, she’s Ebaying last year’s knockers, presumably alongside some old Nike Air Max and an impulsively purchased Primark cardigan BNWT. The article, which featured a photograph of Price channeling a style best described as ‘glam rock emu chic,’ included the amazing quote: ‘I can even sign the implants with a marker pen…I’ve got many more pairs in the safe.’ What’s next – Keith Chegwin auctioning his jizz to raise money for the Red Cross? It’s all gone weird. 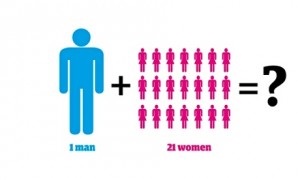 In response to a woefully interpreted research report compiled by the University of Montreal, The Guardian screeched: ‘Men who sleep with twenty one women are less likely to develop prostate cancer.’ Although this statistic rests precariously upon a pathetically woven web of fantasy, lies and utter turd – the research actually suggests a correlation between frequency of ejaculation and prostate cancer, not the number of sexual partners – The Guardian helpfully analysed the potential death risk of a trio of male celebrities by stating the number of women they had supposedly shagged: ‘good news for Gene Simmons (4,600), Mick Hucknall (3,000) and Nick Clegg (up to 30).’ I could go on but, since it’s Halloween, I’ll leave you with the horrific and lingering image of Nick Clegg penetrating up to thirty lucky ladies.

…just as long as you’re paying a medical professional with questionable ethics to inject it into your craggy, saggy, ageing body parts that The Daily Mail’s woman-hate brigade would tut at.  Empty your bank accounts quick; there’s only the risk of  “bruising, infection and scarring” oh and “lumpiness, asymmetry and re-absorption” not to mention the “talk in some medical circles of a relationship with breast cancer, though there’s no evidence for that yet.” Oh jolly good, no evidence of links to cancer yet – phew, then what are you waiting for? After all, if  “fat is injected into a vein in error…” there’s just the rare potential for a stroke; that’s nothing when one might hobble away with slightly bigger breasts and younger looking hands!! But don’t worry about that! Just read how happy they are! No pain no gain eh ladies?

Fancy a trip to another dimension? A twinkly, oily dimension where The Sun takes the moral high ground on the treatment of women’s bodies? A world of shiny suits, statement necklaces and palm trees, where breasts are not subject to gravity, irony doesn’t exist and a galactically sexist publication that daily uses a uniform beauty ideal to shill copies gets the hump with a lingerie firm who use a uniform beauty ideal to shill knickers. They’ve wapped out a ‘body image expert’ who elegantly argues the elementary case against The Sun‘s topless Page 3 feature, but is in fact applying it to Victoria’s Secret, another set of money-humping bap-vendors. It is discussed, with zero self-awareness, how unhealthy it is to try and attain an impossible ideal that’s poked into our eyeballs day after day; perhaps some Sun employees have yet to be made aware of Page 3? They then helpfully give readers a handy point by point guide to developing their own crippling eating disorder. Ah the black hole of journalism where integrity turns to antimatter.

#1 The Made-Up Headline of the Week Award Winner: The Daily Star 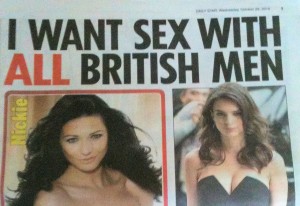 The front page of Wednesday’s Daily Star was devoted to the lingerie-clad Emily Ratakjowski, more commonly known as the woman who endured the slimy fumblings of smug cock weasel Robin Thicke in that dog-awful Blurred Lines video. In the article, Ratakjowski stated: ‘if I want to have casual sex I’ll do it…what I want at any given moment is different.’ These words, when entered into the Daily Star’s ‘sexy bullshit improvisation machine’ produced the inventive headline: ‘I want sex with ALL British men.’ Although prolonged exposure to a smarmy, abysmally dressed rape apologist cretin might bewilder a woman into thinking ‘I would have sex with literally anyone on earth except Robin Thicke,’ I hereby bet seventeen pounds that Emily Ratakjowski does not shag a single Star reader this side of Christmas.

Have a great Halloween and remember ladies, to really scare the horses during this pagan festival you need only to take off your make-up! Right, we’re just hopping onto our brooms and heading off for evil lattés topped with (full fat) cream and a sprinkling of sexists’ tears. Until next week… 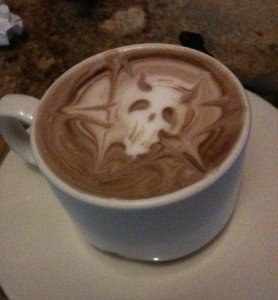