Good Morrow dear readers. Friday is upon us once more, and with it we serve up a tepid plate of news-flavoured offal for your reluctant delectation. You might need a pelican bib; we doubt you’ll keep any of it down…

Props to The Telegraph, who managed to take an intelligent and common sense call for better sex education from feminist leg-end and general Good Egg, Green MP Caroline Lucas and give it a jolly sexist spin. One might be forgiven for thinking that the headline for the article bears some relevance to the content. Nah, thought the editor, let’s go all ‘Daily Express’ and slut-shamey on this shit. Let’s lower the bar. Maybe they had dear old Martin Daubney write the header?

Lucas also talks about other SENSIBLE shit like safe-guarding young people, protecting them and helping them feel able to say NO to people out to take advantage of them. People like, I dunno, Margaret Thatcher’s (alleged) ring of paedo mates.

But hell, maybe the Tory idea of Sex Ed is all about kids getting used to this shit.

So, yay you printed a good piece The Telegraph, but a fucking slow as fuck clap for your framing of the piece, you sexist wankspangles*.

*Saw this GENIUS insult on Twitter, can’t remember where, but if it was you that brought it into my life, thank you.

Ah, those tykes at The Sun, they love and champion women and their professional endeavours. They also love a laugh. Well, if it’s boys making the jokes. They published a photo of the cast of the new all-female Ghostbusters, with zero comment. Zilch. Zip. Nada. Niente.

But, they knew their faithful readers would take up the challenge. Enter stage right our brave online protagonists; Key, Elvis, Burt28, Moonk and Matt mould. A quintet barely in control of their grammar-glands, all with huge respect for women in film. Obviously.

Key: This has got fail written all over it. Also they look like Claire Balding’s bin men.

Elvis: I sure hope the camera crew were all woman. Or the femanists will really get up set. (sic)

Moonk: It’s just going to be so rubbish and a total let down from the original movies.

One thing I’m impressed by, is the fact that Claire Balding has her own cohort of bin men, that also catch ghosts. Is this yet another ostentatious and lavish excess enjoyed by BBC staff? No wonder The Sun want to see the debauched Beeb vanquished. Does the public purse also fund other flagrant exploitation of public amenities for Auntie’s slebs? Does Nicholas Witchell have his own reservoir? Or Fiona Bruce her own team of postal workers? Oh scratch that, the Post Office has already been privatised.

Denied a corpse to dry hump by her cremation and inexplicable burial behind closed doors, the Daily Mail have latched onto this piece of yawn-tastic, arse fluff about Margaret Hilda St Bastard Thatcher.

In a few short words, it’s about how she planned the range of outfits that made her look like a ‘housewife’ who has been hogging the crack pipe, and how she didn’t agree with Tebbit. Be still, our beating hearts and quiet our heaving diaphragms as we catapult Tesco Value carrot and coriander over the dog.

If there’s one thing that this piece demonstrates, it’s that Theresa May could flay everyone in Yarl’s Wood, shoot all protestors and decimate the unions, and the most she could expect from Paul Dacre is a puff piece about how she once had a handbag that didn’t match. Thatch is dead and buried, guys. Get over it. 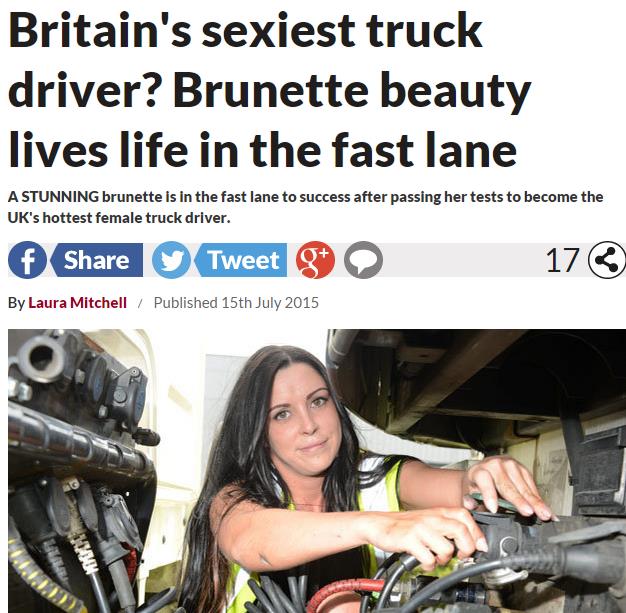 Meet Ashley Haywood: one of Britain’s youngest professional HGV drivers. She works in a male dominated environment but, happily, she has not experienced discrimination or sexism from her co-workers, who are helpful and supportive. How nice then, for the Daily Star to attempt to rectify this, with an article that basically reduces her to a pair of tits tootling about in a van.

‘Is this the UK’s hottest truck driver?’ they ask, wanging on about her ‘big brown eyes and long flown locks’ (what?) that may render her the nation’s ‘prettiest heavy machinery handler.’ How lovely.

Ashley’s boyfriend is also one of Britain’s youngest professional HGV drivers, but they fail to mention his arse. Funny that. 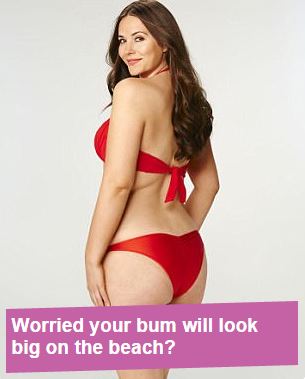 Well Daily Mail, I’m not that concerned about my arse TBH, since you’ve been telling me all week that terrorists are going to kill me on holiday (most of Europe is on RED ALERT) and that I’ll also die if I stay at home (Britain is on RED ALERT). I might just hurl myself headfirst into some giant hogweed and get it all over with; it seems preferable to the slow, awful death I’ll otherwise face as a result of the hayfever MISERY that is sweeping Britain. That’s if diabetes doesn’t get me first.

If there’s one thing worse than a woman, it’s a foreign one. Who is pregnant. With a child who may grow up, talk all foreign on trains, assault your nan and be a drain on the Exchequer for years to come. Or so the Daily Star hopes.

In this trés subtle piece, the paper is functionally concerned with the rise in children born to foreign mothers. Still, it also finds time to take a kick at older mothers whose births can be more complicated (read: expensive and a strain on the NHS you inefficient hags) and the increased rates of unmarried mothers raising AN ARMY OF BASTARDS who want to BURP UP globules of HATE all over OUR SACRED LAND.

I’m off to get knocked up by a sexxxxxy Polish plumber called Bogdan and send the polaroids of us Doing It* to one Matthew Young who wrote this pile of bum trifle. Happy Friday, Matt, you fanny.

*Lights off, nightie on. Obviously.

4) Woman with tits looks at pope

The Sun can’t believe a woman would have the audacity to go bra-less in a flimsy t-shirt whilst lining up to watch the Pope drift by in a little van. They’re so outraged, they’ve included a massive photograph, so we can understand exactly how see-through her top was. Luckily, the Pope’s blokes chased her out of town, lest the Holy One should catch sight of a bit of tit. It seems odd to me, heathen that I am, that a man who spends all his time in a pretend city communing with God should be so offended by his handiwork. It would be like having George Stephenson round for dinner, but quivering with terror in case anyone should mention trains.

I mean, if God is real, she invented tits. Maybe the pope should grow a pair.

‘If you’re going to bare the breasts, make sure it’s in a classy way’ warn The Sun’s tit police, in this online article which appears surrounded by Page Three adverts. Presumably then, the classy way to go braless is to smoulder against a tree in Tenerife, at a safe distance from men of the cloth?

If only the aforementioned Playboy pope-watching beauty had read this stimulating think-piece, she would’ve realised she was getting her tits out in the wrong manner. Honestly, will women never learn? They’ll be breastfeeding in public next!

2) This mound of tripe makes us pity you, Viney

In the always lovely Daily Mail, our Sarah is worried – on Kate’s behalf  you understand – that Prince William will want to pork one of the lady doctors he works with. She’s a woman, you see, has a pulse and doesn’t look like the back end of any vehicular public transport. Added to which, Sarah theorises, with a kind of glaring ahistorical stupidity, men resisted equality to get away from their own families. Kate must hate her, she says, perhaps projecting a teensy bit too much.

Suggesting that someone who is married to Michael Gove would want to escape their spouse is beneath us. So we won’t. No, we won’t mention Gove at all.

Stop everything: the nation’s favourite raven-haired breakfast temptress, Susanna Reid, licked her own finger on television this week.

The Daily Mail was understandably shocked by this louche behaviour and, once AGAIN, criticised her ‘coquettish’ interview technique.

‘Susanna Reid has long been accused of being a less than serious newshound, who spends more time outrageously flirting with her interviewees than quizzing them about serious issues’ they wrote, in their pressing news article about Angel Delight.

But you’ve got to hand it to Susanna; she broke the internet without having to take her trousers off and balance a tray of drinks on her arse – she did it by simply shoving her hand in a dish of blancmange. She’s hit upon a niche fan base of unemployed blokes who watch daytime telly and suffer a burning nostalgia for 1970s/80s convenience foods.

If I was Susanna, I’d be all over this shit. She could start off gently, by suggestively placing a Findus Crispy Pancake on her bare knee, before draping a pair of freshly worn tights over a tin of Tip Top, fluttering her eyelashes at a Caramac and having full sex with a Viennetta. 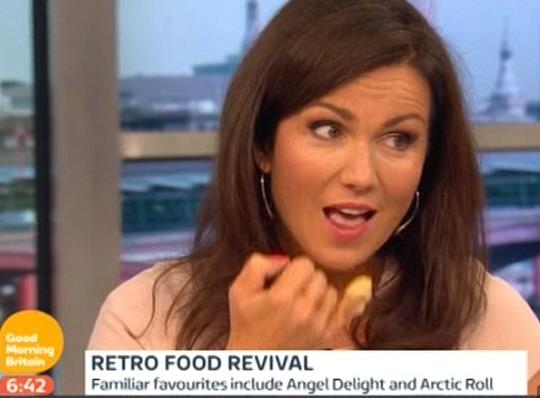