Well ladies and gents, this week the sexist bullshit fairy ran barefoot through our national press. Wedding cockery, foot fuckwittery, pregnancy piffle, it’s all here. We’ve been busy amusing ourselves and trying our best to ignore it all until absolutely necessary. Iris has been being followed by a single magpie for four days, so has put her shoulder out saluting it like mad lest she suffer any sorrow and Flora has been experimenting whether her favourite dress can grow its own ecosystem if she doesn’t wash it. But enough about us and our exciting lives, it’s time you read the grim truths proffered by journalism’s finest…

10) Shock as Daily Mail pits women against each other! 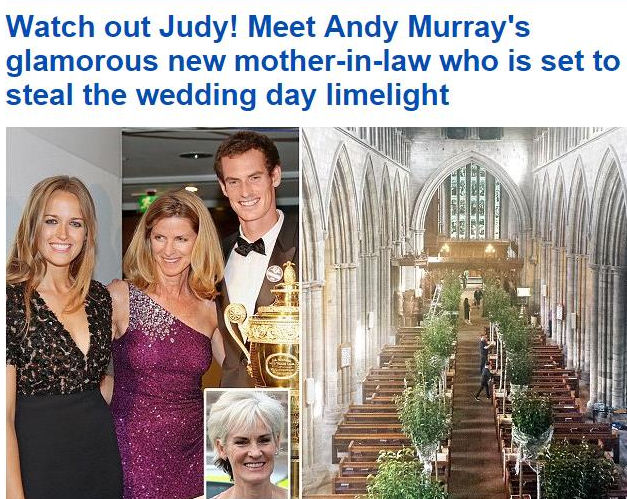 Mother’s eh? Forever competing in glamour-battles and upstaging brides. Pity poor Kim Sears, who, according to the Daily Mail, was lumbered with two mothers desperate to ruin her big day with their fancy blouses: Judy Murray and her own mother, ‘Leonore Sears, 53, who has long been admired on the tennis circuit by gentlemen of a certain vintage’ (who wrote this, Julian Fellowes?) Anyway, in the end none of this mattered, because the Mail thought the entire wedding party looked like dog crap, so that’s nice.

In an incisive 46 word exposé The Sun try and shaft Ed Miliband by quoting one of his unimpressed ex-girlfriends, because The Sun tend to value women’s views on politics – Tom Newton Dunn has never belittled a female politician before and they’d never trivialise a women’s issue by, for instance, placing it next to a picture of tits. But I was digressing, her brief statement, ‘It was a v costly few weeks,’ suggests a really troubling issue about our Ed. One can only assume that he lost his wallet and she had to pay for dinner a few times. What a doofus. I mean how can we possibly trust this man with our economy if he can’t keep hold of his own debit card on a date? The only other reason The Sun might have run this investigative ‘article’ (aside from alerting us all to the fact that a politician who doesn’t have his head jammed up Rupert Murdoch’s sulphurous anal cavity may not be a red-hot-lover-and-husband-material-for-every-woman-he-ever-met) is that they had a great pun on Flanders and they had an eight year old, or Dave Dinsmore, write the copy.

The Daily Mail have gone gender equal on the hate this week, let’s face it, they’ve got truckloads and might as well share it about. So there are some men who have dared to forego the Grecian 2000 and look their age, the scamps. What follows is a gallery of ‘silver foxes’ (vomit) and a smattering of judgement about how these rich, handsome chaps are wearing well.

But woe betide the average dude with a Mail-reading mrs. If you, oh woman, are not making your man hate himself, you’re probably failing. But fear not, this sad parp of an article wants to help you. No, really. They care.

Basically, what your man needs is short hair, a bit of fake tan, a dyed beard that is trimmed to within an inch of its life and a suit. Yes, that’s right. An orange man with a foolish beard and an eBay suit, (basically a furry Gary Lineker) could be yours if you’re provided to heed the wise words of Associated Newspapers and find him disappointing enough.

7) There are no words 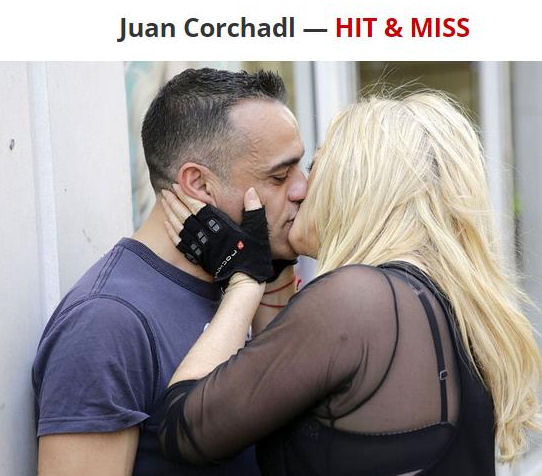 Controversy abound this week, when Madonna copped off with reedy-pitched R’n’B twat, Drake on stage (against his will, some say). Well, The Sun responded by finding a woman who bears a slight resemblance to Madonna, dragging her about the back alleys of London and paying her to snog random blokes on street corners. These desperate men were then questioned post-cop off, re. their feelings about kissing a middle-aged woman. Is it ever ok?

As an aside, the ‘Drake test’ sounds like an unpleasant Chlamydia-related swab examination.

6) Mother of all sins

Another from the Daily Mail, by someone suitably ashamed of themselves not to bother with a byline…anyway…

As if shoving a small person out of your front crack wasn’t enough, you’re now expected to lose the ‘excess’ weight you might have accumulated in supporting their existence. Immediately. Like it was just a silly bonnet you popped jauntily on for a laugh.

Honestly, just look at Holly Willoughby. She’s ‘lithe.’ Has ‘buoyant hair.’ She is a ‘beauty.’ And has a ‘work ethic.’ So if you’re carrying any evidence of parturition, or you hair is lank, or you feel like a minger OR, heaven forfend, you’d rather weep, scream and shit yourself blind than go back to work, you’re failing yourself AND your child. Who obviously will grow up to be a work-shy scrounger.

Oh women, aren’t we unnatural, with all our hormones and needy whining and sweaty, generative crevices. Those delightful creatures at The Sun do love to remind us that we are different from men, and by different from men they mean gross and weird. With this in mind, their new bid to emphasise that women are freaks of nature if they aren’t posing silently in their pants, whilst being tanned and 22 years old, the Sun journos present us with a woman who eats their words, literally. Not only does Teresa have Pica, which makes a person want to eat non-food items, she finds herself craving a paper which is happy to routinely mock her. We’re surprised she’s not been admitted to hospital for ingestion of turgid, right-wing balderdash. That said, it’s probably better to eat The Sun than actually read it, that really is a health hazard.

4) Dear Express: having nipples is not ‘an embarrassing wardrobe malfunction’ 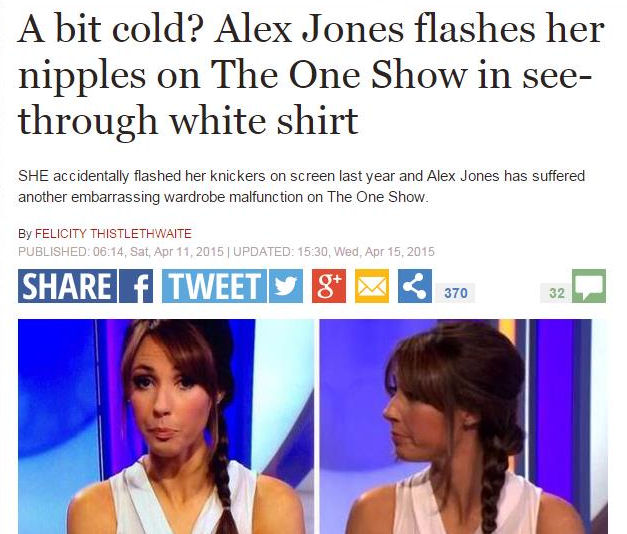 Alex Jones caused quite a stir on the One Show this week. Apparently, if you stared really intently at her tits, photographed them and zoomed right in, you could see the vague outline of her nipples beneath her blouse. The Daily Express wrote: ‘Alex, who was recently engaged, was completely unaware of the shirt situation as she interviewed Clare Balding and carried on like a true professional.’ Well, that’s commendable, isn’t it? Carrying on like a true professional, despite having tits! What Blitz spirit! A less professional presenter would have run off screaming. Well done Alex, 41, who was recently engaged.

I bloody hate tidying up. I HATE it. so imagine my fury upon learning that my clean-up efforts ought to extend further than sponging cat hair off the settee. You see friends, we now need to tidy our vaginas as well. I know, I know, how can you tidy what is essentially an indoor cavern? It’s not like there’s loads of biro lids and Hobnob crumbs up there (I only ever insert Bourbons). Anyway, a woman I’ve never heard of has had her vagina tidied up with a ‘love laser,’ according to spaff comic the Daily Star. Confusingly though, in the online article, the words ‘love laser’ appear to have an embedded link, which directs readers to the Brother DSP7055 laser printer at Argos. Does this mean that love lasering is a DIY Maplins affair?

I’m crouching over my HP Officejet Pro as we speak, but nothing’s happening yet. How will it smarten up my vagina? Will it print me a new one? I’m not holding out too much hope to be honest; it took three factory resets and 47 hours to print a photo I took of a parrot in Lanzarote, but fingers crossed, eh. 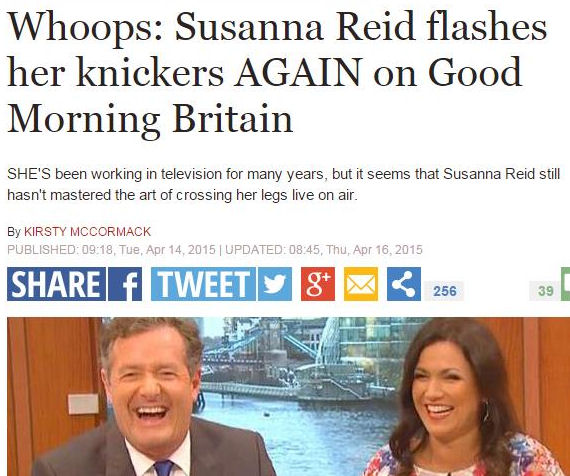 Dear readers, please spare a thought for Daily Express editor Hugh Whittow, who has suffered an extremely challenging week. For there he was on Tuesday morning, pleasuring himself with a Moleskine notebook to a backdrop of Good Morning Britain – his usual routine, you understand – when his glance shifted from Susanna’s lovely knees to a flash of– what was that – no, it can’t be – yes, yes, YES, – sweet mother of our Lord Jesus CHRIST,  it’s SUSANNA’S PANTS!!!!!

Well, as you can imagine, Whittow passed out there and then, breaking his fall on a decorative urn. He is still in hospital now, battling hysteria, ‘urn foot’ and grade five paper cuts. Please send all flowers and cards to St Thomas’ Hospital, Ward 13C.

You. Yes, you. How big are your feet? Are they too big? Do you have dainty wee little things on the end of your legs or do you need clown shoes? We only ask because the Daily Mail are worried. They’re worried for celebs and they’re worried for us all. They are especially worried that these famous women’s feet could be too long. To long for what is unclear, maybe wearing kitten heels? Or standing on shallow steps? Or minding the gap? I personally have rather large feet for a short person, and am now concerned that maybe I should be famous; maybe it’s a sign of things to come? Or maybe those with long feet should get off the red carpet IMMEDIATELY lest we suddenly start finding women with MASSIVE feet acceptable. I mean really, how dare they?

But what is important is that you look downward, contemplate the things which hitherto propelled you loyally around, a part of your body you may not have expressed any dismay over and do something very special. You break off a shard of hate, buff it against Paul Dacre’s bloodless yet turgid member and shove it deep into your self-esteem. For what reason, we can only guess, perhaps the Mail is about to start advertising a foot binding service for the terminally flippered. But do it now. You giant-footed harpy.

So, we’re off, we’ve got shit going on, as you know. Weeping at the sorry state of our media is just one of them. Now before you all start thinking about the weekend and having a cheeky spritzer since the weather is currently something to discuss in a positive fashion, why not hop onto Twitter and wish the fantabulous Everyday Sexism Project a happy third birthday! Happy Birthday ESP! Lots of love Tights xxxx