Roses are red, violets are – oh, I just can’t be arsed, dear readers. But, anyway, Valentine’s Day is upon us, with all its crap bears and hearts and 25% off Prosecco in Sainsbury’s. And that means a bumper week of patronising, sexist manure chucked in the faces of women, all in the name of romance. Are you ready to face this onslaught of turd? Yes? Steady yourselves, here goes: 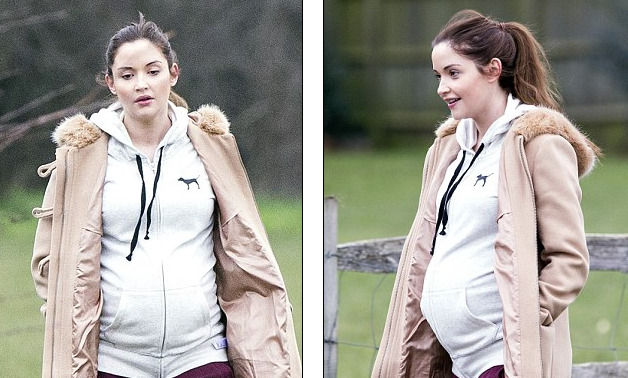 Yet again, it seems a woman wearing no make-up – and trousers that will not send her to A&E with a violent case of Thrush – is news…There are twelve photographs of Jacqueline Jossa from that Eastenders walking her dog, or her mum’s dog (who cares?) Yes, twelve near identical photos. Are the Daily Mail just showing off? Clearly, being so popular with any woman who has cultural Stockholm Syndrome will generate a lot of ad revenue, so they can just spunk a load of cash on 12 pictures of a woman in jogging bottoms and a thoroughly unremarkable coat. Oh, to be in England. 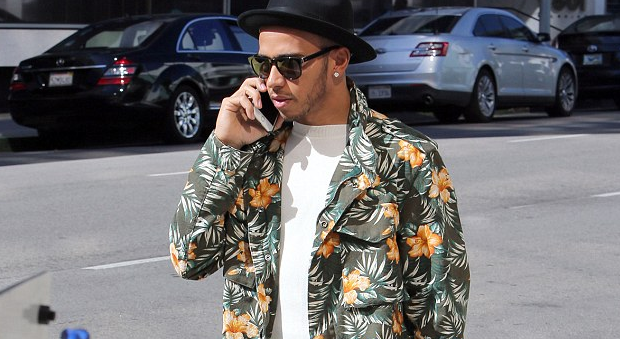 As we all know, women must adhere to strict sartorial rules, the likes of which change rapidly in fashionland, for being up to the minute is very important. One cannot lag behind where coats and socks and vests are concerned (see post above). And so, women do their best to stay ahead of the curve, especially prime-time reality/judgy-type celebrities who, we all know, are decommissioned if they look too un-trendy and stored in a warehouse in Slough, for parts. But, today we have learned that, not only are we ladies responsible for making sure they present themselves with style and panache, but it is also our responsibility to ensure the men in our lives don’t go out wearing ill advised coats with fruit on, or impulse-bought hats. Poor Nicole Scherzinger seems not to have received this memo and, since their most recent break up, poor, hapless Lewis Hamilton has been forced to dress himself. The Daily Mail think this hasn’t gone too well. But, then we can’t trust them either – they recently made Anthea Turner wear 6 different pairs of culottes.

Oh Martin, dear dear Martin Daubney, former Editor of Loaded and now token-former-working-class-gobshite for The Telegraph. He’s been very busy ferreting about and doing incisive investigating into all things objectification. Yeah that old chestnut, that thing that we wimmin whine about endlessly – oh yaaaaawn, sorry Daubs, were we boring you?

Oh but Martin has watched everything everywhere and done extensive research into all advertising and such, and come up with five, yes five examples of men’s bodies for the entertainment of women (#notallwomen) and gays – he stopped short of saying ‘the gays’ thankfully. He didn’t mention Diet Coke Man, which is odd, but maybe it’s too painful for him, 11:30 we know, is an unbearable time of day for many men and we understand. This leads me to surmise that, if it’s now worse for men, then there must be fewer than 5 objectifying media examples of women in current circulation. Now, far be it for me to question this man’s rigorous research, but actually, yes I do question it – unless all evidence can now be found by spending 4 minutes on Twitter, in which case, give this man an honorary PhD. Anyhoo, bless his tits, he’s obviously really enjoying the attention of being a wilfully divisive arsewit, so here you go guys and gals, here’s a link to Martin’s ludicrous blog.

7) Trite tips for a shit lovelife

Last week, a smug nobhead did the rounds on breakfast telly, blathering about a ‘book’ he’d ‘written’ entitled Own That Guy in 60 Days. Luckily, my wanker-defense mechanism kicked in, and I instantly forgot his name, face and words. But then the Daily Express went and wrote about it, probably because they could shoehorn it into a topical toilet-grade ‘women’s interest’ piece in time for Valentine’s Day. I’m not going to get into the actual love-tips themselves, which are the same hackneyed bags of wind that have been peddled to women since the Tudor dynasty. Instead, I’ll present you with the opening paragraph alone:

‘Forget Cupid. If you’re looking for love or want to make your beau (is it 1832?) love you more, relax ladies (fuck off), because a new book promises to give you the powers to make this happen…the tips are based on…the same principles used by Wallis Simpson to capture and dethrone Edward VIII.’

Yes, that’s right, this Valentine’s Day you too can capture and dethrone the beau of your choice, without relying on a fat baby with a weapon to do it for you. Love is truly in the air, ladies.

Ah, women; forever capturing and dethroning blokes and then wanging on about roses and engagement rings. And men, those beer-sodden, Castrol-stained imps, constantly forgetting birthdays and using the wrong defrost setting on the microwave. Mars and Venus, eh? Well, don’t worry friends, for the Daily Mail have published a helpful guide, outlining all the ways in which men will, inevitably disappoint women on February 14th. I only wish I’d had the support of this guide last Valentine’s Day when, following an unfortunate experiment with matcha powder, I opened the door to my boyfriend and immediately vomited a bright green foamy liquid all over the stairs. AND he never proposed. The bastard.

5) The Art of Slinkiness

Major news from the Daily Express, who this week reported that Zoe, 27, who has lost five stone, has been crowned ‘Miss Slinky.’ Brushing aside the fact that I have no idea who this woman is, I would like to question the purpose and function of the ‘Miss Slinky’ title. How does one measure slinkiness? Does it relate to how effortlessly a woman can travel down a flight of steps end-over-end, stretching and re-forming herself with the aid of gravity and her own momentum? This is a dangerous feat. And why is there no Mr Slinky, or Ms Slinky or Dr Slinky? Hang on, I’m wrong, there IS a Dr Slinky – he used to DJ at Cafe de Paris in Rotherham. Good times.

The Sun are so flipping down with the times. Not only have they introduced a snazzy new font on their website, which sees headlines displayed in a rainbow of colours (a cutting edge style pioneered by Sugar magazine, circa 1994), but they also have their clammy toddler fingers firmly on the pulse of women’s fashion. They have noticed, just this week, that no woman in Britain has worn a Wonderbra since 1998 and they are determined to find out why. They want answers goddamnit, and they want them NOW. In their inexhaustible search for The Truth, they asked a random woman who works in merchandising for her opinion: ‘modern women feel that they are well able to speak up for themselves rather than letting their breasts do the talking’ said Carie Barkhuizen. This statement is followed, with no sense of irony, by twenty ‘sexy’ photos of women wearing bras. *Sigh.* 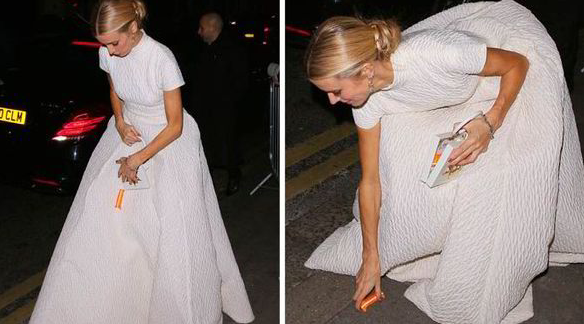 Nothing, and I mean nothing, could be worse than what happened to Laura Bailey, as reported by the Daily Express. Nothing. We hardly dare type it, it is so harrowing a thing a for a woman to even read about, let alone endure… She dropped a tampon. In front of the Paparazzi. If I’m honest, I don’t know how she didn’t self-immolate there and then with THE SHAME. For this is proof that not only does she HAVE A VAGINA, but she potentially issues BLOOD and MENSTRUAL FLUID from it. Sweet Jesus, women are fucking gross. Perhaps we should make her embroider a big red V for her shameful VAGINA on her lovely frock and make her go and live in the woods.

No the Daily Mail. No.

That ‘article’ is TWO THOUSAND words long. Think of the wonderful things that might be said in two thousand words? An ode to something sublimely lovely, a feisty polemic, a ruthless critique, a sensitive think piece, an eccentric and rambling exploration… No, two thousand words have been spaffed over whether Women. Should. Shave. Their. Faces. Apparently, it’s a good way to exfoliate two thirds of your face and look younger. One begs the question: why not just exfoliate your entire face with a flannel? After all, who wants their chin looking 15 years younger than their forehead? 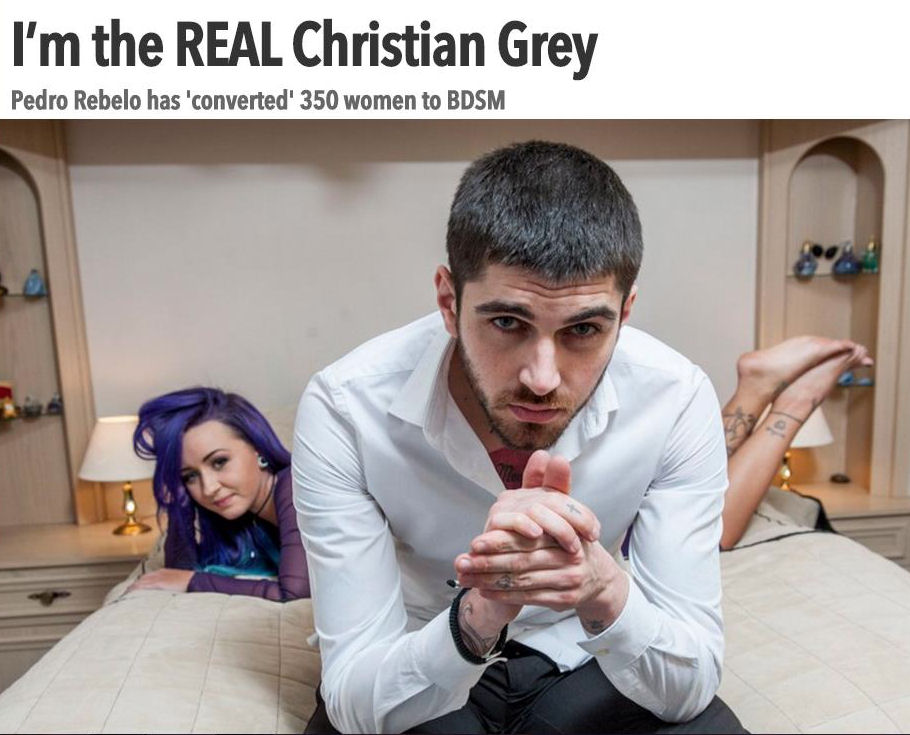 Now, I haven’t read Fifty Shades of Grey because, generally speaking, I like to read books written by people who have used words previously, in other contexts, before chucking 98,000 of ’em together in a ‘novel.’ From what I’ve seen of Fifty Shades, I believe it was written by a listless Alsation in the winter of its life. Anyway, The Sun have leapt upon the randy bandwagon, knocking together a quick article about a desperate accountant from Hemel Hempstead, who likes to fasten strangers to his beech effect bedpost with his dressing gown belt.

Pedro Rebelo, real name Wayne Scraggins (probably), says:  ‘I put women on a pedestal and rip it away to confuse them and keep them keen, leaving them eager for more…I’m addicted to controlling the whole situation (and) I like to push it further each time…dominating and punishing women is an empowering experience for them.’

Well, whatever you think of handcuffs and whatnot, you’ve got to hand it to Pedro-Wayne for making this type of thing more accessible to us run-o’-the-mill, disempowered women. Forget dungeons and torture gardens, here’s an office worker from the ‘Crappiest Town of 2013’ ready and willing to experiment in a bedroom environment that, in my humble opinion, has a greater air of DFS than BDSM. Look at the nice Matalan bedspread and those lovely ornaments on his MFI shelving unit. Is that a reproduction Fabergé egg? This is a man who KNOWS women. Nothing, and I mean NOTHING gets me off like Royal Doulton.

There goes another week, friends. We’re off to have a shave, get our gladrags on and dethrone that plumber who’s ‘working’ next door. Wish us well. Ta-ra! x