Happy Friday! Are you ready for a whopping helping of festering crust on a platter, courtesy of our national press? Thought so!

Disclaimer: We cannot be held responsible for the phone-chewing, laptop-kicking rage vomit that reading this post may induce. We suggest any distress be directed toward IPSO, the COMPLETELY UNBIASED AND SCRUPULOUS Leveson-baiting press regulator, run with total integrity……………………..

‘Clumpy flat shoes that seem to shorten a woman’s leg’….. who are all these clumpy shoed short-legged women walking around in the daylight!? Has no one told them they are literally repelling men as we speak, all the men, REPELLING them! They’ll never bag a man with their pig-headed refusal to ‘flaunt’ ‘parade’ and or ‘pour’ their curves into something respectable, tight, and preferably shiny. Dear readers, don’t make your fashion choices according to how you look or feel, always remember clothes are mere display cases for you to proffer various body parts in a palatable and enticing way to the men-folk, young and old, who walk this earth (but not too much cleavage mind, that’s just cheap). No one is safe from these styles; they are making their way to a high street store near you. Please ladies, I urge you to use The Mail’s handy guide, or risk consigning yourself to an eternity of cocoon-coated spinsterhood. 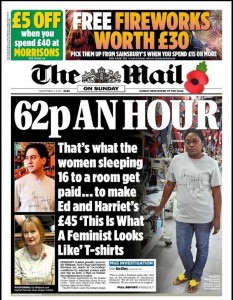 The B team were in a state of smug hysteria at The Mail on Sunday this week, with the stuff that journalistic dreams are made of: the opportunity to shit all over modern Feminism AND the Labour Party in one go.

Nice to see The Mail cares so much about workers rights; remember the article they ran on the Living Wage campaign, or the one about cuts to NHS workers’ pay…. Nah, me neither.

Still, it gave them a well-deserved break from deciding whether or not to use the word ‘Migrants’ or ‘Immigration’ on the front page, which is nice isn’t it?

8) The Sun have no standards, OFFICIAL. 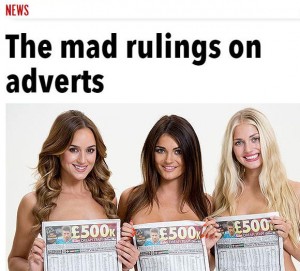 In a spiffing move, the ASA this week banned a Sun ad for being *surprise* sexist and offensive. As if raffling off a side of tripe, The Sun’s ‘Dream Team’ promotion offered a date with a Page 3 model as a prize. Responding to the ban in typical playground bully style, Dinsmore and his cronies branded the Advertising Standards Authority ‘humourless’ and provided a helpful list of other ads ‘that have fallen foul of the ASA jobsworths.’

Number one on their list was a Paddy Power promotion, that cheerfully encouraged customers to bet on whether Oscar Pistorius would serve time for murdering Reeva Steenkamp with the reassuring guarantee: ‘money back if he walks!’ As usual rather than being vaguely mature adults and owning up to their piss-poor judgement, Dave Dins and his mates decided to release a statement that was the equivalent of a 3 year old boy holding his willie and sulking about how his brother did something worse yesterday. Wah wah wah. 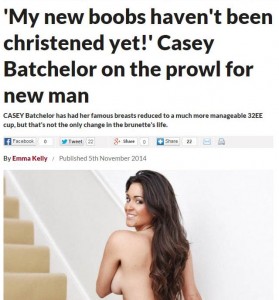 The Daily Star delivered a major scoop this week, revealing the scandalous news that Casey Bachelor’s ‘new’ boobs have yet to be christened. This worried me no end, as my own tits haven’t been christened either. I didn’t even know that tits need christening. Does this mean that my tits are doomed to writhe in an unthinkable, torturous Hell? I thought I’d delivered myself from that evil when I chucked that fucking Wonderbra in a skip at the back end of 1997. 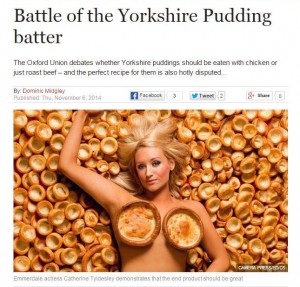 According to the Daily Express, the Oxford Union this week debated whether Yorkshire puddings should be served with roast chicken or beef. Their description of the event, which made me want to burn down Oxford University, stated that ‘two men, dressed in black tie, one sporting a chicken’s head mask and the other a cow’s head, got involved in a finger-jabbing row on the floor of the chamber as passions ran high.’ This farmyard toff-off was illustrated with a photo of a naked woman writhing seductively in a massive bin of Aunt Bessie’s. Yes, dear readers, in the media even Yorkshire puddings need tits. 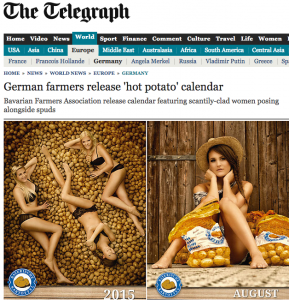 Can you see a theme here? The Telegraph, decided that we needed to know about this jolly crop of Bavarian potato farmers who have jumped on the sexy calendar bandwagon to advertise that super sexy vegetable, the potato. Nothing says glamour to us at Tights like rolling about in a pile of spuds. The calendar makers have stressed that, although the sexy ladies (TM) do draw the eye, it’s the potato that is the focal subject. Give The Sun their due, they may compare women to root vegetables, but they’ve yet to make them pose as a potato’s sidekick…there’s still time mind, they’re nothing if not inventive when belittling women.

4) Kate Moss and her Derriere 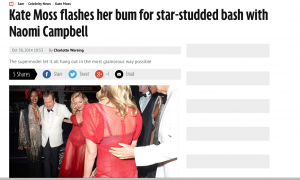 I must admit I got confused with all the talk of ‘flashing’, and inner ‘sirens’ and thought for a moment that The Sun, The Mail and The Mirror were all covering the Firefighters’ strike but, alas, no. ‘Now that’s how you appreciate a woman’ I thought as I poured over the fiftieth picture of Kate Moss’ arse cheeks from multiple angles in the The Sun’s two page spread. Those guys and their body positivity, it gets me every time. 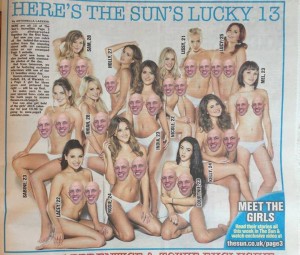 A common criticism of Page 3 is that The Sun treat women like cardboard cut-out boob-couriers, but not anymore!! In their ‘Meet the Girls’ feature we’re treated to incisive, challenging interviews. Ha, I’m kidding, their intentions are so hollow that I heard the echo of  ‘sexist despair’ ricocheting around the room when reading this insulting piffle. But, maybe I’m wrong; maybe discovering that a woman prefers X-Factor to Strictly is Pulitzer winning stuff… 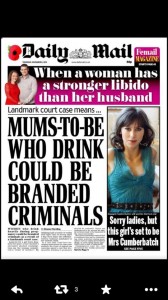 Paul Dacre has, frankly, excelled himself this week. And considering he’s the man who presents women collectively as a spittoon for all society’s odious, septic, mind-flob, that’s saying something. I’m surprised that a rotten, sulphurous stench wasn’t cascading off the covers of this edition and billowing noxiously out of newsagents’ doors. Paulie Baby probably got the boner of his life at the potential for a cover that could simultaneously judge ALL British women – I mean, we all drink snakebite with our lunch whilst up the duff, aim to rut our husbands’ gonads dry and want to boff Sherlock Cumberwotsit, right?

1) Woman to blame for her ex being a vile, murdering scumbag. Of course. 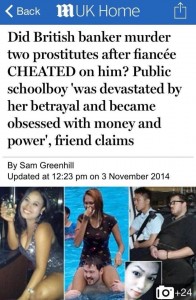 First place this week, by a LONG SHOT  is this slice of  journalistic Hell. One can only imagine Dacre gleefully spaffed his shorts (twice) at the sheer misogyny-quota when sending this utterly utterly horrific Mail story to go live.

We’re sorry to be the amusing messengers of such infuriating tripe… if you’re now grinding your teeth to a paste we recommend a visit to Cute Roulette to bring down your blood pressure.

Until next week, dear readers x