Afternoon all, sorry we’re late today. It’s a long story involving ovaries, gin and a ludicrous settee, we will spare you the details. We must say, this week we’ve both felt quite crabby. This may come across, so forgive us for all the profanities. Maybe the last 7 months of imbibing nuclear levels of gag-worthy news gubbins is taking its toll… 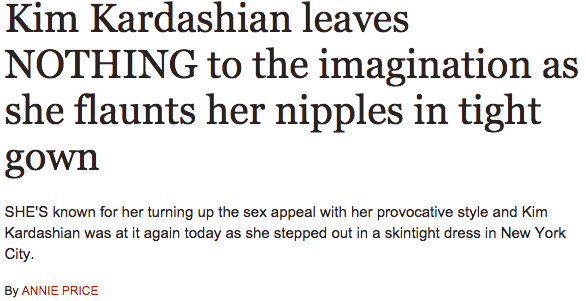 Now. I’m concerned about The Express. Not only is their online edition frequently littered with typos, which suggests they cannot afford a sub editor (I may loan them Flora, as she sorts out all my grammar indiscretions). But they also seem to have trouble understanding some concepts. Like the concept of imagination, for example. I personally have a very fertile imagination, but it’s not a massive stretch for anyone to imagine that perhaps Ms. K’s nipples are made of chrome, or coal, or some kind of felt-based haberdashery material. But, in this case, the notion of ‘leaving something to the imagination’ seems a bit of a moot point since a) lots of people have seem Kim’s sex tape and b) at the arse end of last year virtually everyone blessed with vision and a 3G connection were treated to a gynaecologically detailed image of her stark-bollock-naked.

Because this piece is such a complex and layered example of journalism, I’d also like to address the concept of FLAUNTING. When someone is FLAUNTING something, I imagine something brandished on a platter, or someone dramatically appearing from behind a velvet curtain or, bizarrely, Barry Manilow’s Lola (she was a showgirl) springs to mind – I think it’s the feathers. This is entirely lost on our tabloid press, but flaunting something is generally a bit more extravagant an activity than just happening to have nipples, or legs, or abs or an arse. I have an arse, Daily Express, and you can kiss it. 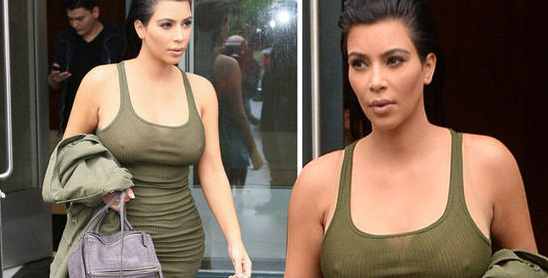 9) We are never ever reading this turd again

She might have made $64 million last year and be the youngest person on the Forbes Power List but, guys, what about Taylor Swift’s pencil thin legs? You’d think she would’ve sorted them out, what with her control-freak-power-complex and everything. Also, did you know that she hides her feminism, ‘so as not to alarm her male fans?’ What a shit woman.

Worst of all, I bet that brazen hussy doesn’t even care what the Daily Mail think. She’s probably too  busy shaking it off with that Kelvin chap in some trendy nightspot.

P.S. Beneath this uplifting love-in of an article, is a quiz entitled ‘will you die in the next ten years?’ Cheers Mr Dacre
P.P.S. The header for this article disturbs ever so slightly, does any young super fan want to know that while they’re enjoying some lovely pop music, their dad is off to one side thigh rubbing? Dads eh?!

So Prince William referred to his wife and our future queen as ‘the missus’ – possibly because he’s trying to seem down with the proletariat, or because he’s a rampant misogynist, or because he’s an inbred idiot. Or maybe all three? I’m not sure I care, it’s fairly derogatory but then this dude is going to be a King, I find the whole concept of his family’s position to be the epitome of inequality. But oh Martin cares. Martin cares that some people care. In the Telegraph. For money.

Former Loaded editor Daubney (not something he mentions all that much, he really could dine out on that for a while if he weren’t such a wallflower) seems to have positioned himself as a the enfant terrible/reasonable voice of men who want to appear reasonable, and who are all for (reasonable) equality, but in fact is mainly just an irritant, but sadly one immune to Anthisan. Anyone with more than 3 firing synapses will see through his ‘calm down ladies, have a pint, be REASONABLE’ patter. Or maybe he’s RIGHT? Come on, not ALL sexist-sounding-things are ACTUALLY sexist, you’re probably just being a shrew, there are actual important things going on, like…the pay gap. Most crucially he tells us that “most decent men don’t want to be seen as sexist” and that is indeed laudable. But is the answer to this for people to just stop calling sexist people sexists? Or for people to, oh I dunno, stop being fucking sexist?

I have to say though, at least Martin acknowledges there is a pay gap, bless him. And I for one am overcome with gratitude. We should maybe erect a statue in his honour, it could be papier maché made from all the unsold issues of Loaded.

Oh nob off and eat a swan, Dave.

Oh look, it’s the Mail’s bi-monthly fertility scare-piece. I remember once nearly setting fire to my television when well-coiffed right-wing gorgon Amanda Platell was wanging on about women being all SELFISH and wanting bloody careers, when they really should be barefoot and pregnant all throughout their twenties.

Oh bore the fuck off Julia, get on with parenting your child and leave my ovaries to dry up in peace.

5) The Patriarchy really does care

Gosh, not a day goes by without some journalist working for a rag practically brimming with boiling, acidic hate for women and all their grotesque body parts – like skin and flesh and hair- expressing concern about women and girls’ body image, or the rise in eating disorders. I mean what on EARTH might be detrimental to positive body image in women and girls? Hmmmm. Crikey this is a tough one… I mean I’m really struggling with this…

Oh wimmin, with their bank accounts and postal votes and trousers. They try, bless ‘em, but they can never really cope without a husband around the house, to do clever things with screwdrivers and sort the trellising out. Those spinsters are only pretending to be happy; the Daily Mail knows this.

Mind you, look what Sarah Maitland says about spinsters:

‘In the Middle Ages the word “spinster” was a compliment. A spinster was someone, usually a woman, who could spin well: a woman who could spin well was financially self-sufficient – it was one of the very few ways that mediaeval women could achieve economic independence. The word was generously applied to all women at the point of marriage as a way of saying they came into the relationship freely, from personal choice, not financial desperation.’

Ever desperate to excite their 72 readers, the Daily Star ran this enticing – though ever so slightly misleading – headline. The story goes that Britney Spears once had her top off at home, whilst listening to Mariah Carey on the radio. That’s sexy, innit? Not to shit on the Star’s scoop, but I can top it: I went through a phase of taking my laptop into the bathroom with me in the mornings – I got my muff out for Paxman TWICE and I passed a bothersome stool in front of June Whitfield on a Stannah Stairlift. Beat that Britney.

Women are completely to blame for their body hangs ups, as we all know. It has nob all to do with the patriarchy, advertising and the media. Similarly, women are to blame for all men feeling bad about themselves too, says Feminist broadsheet, the Daily Mail.

Honestly, women, eh. They ruin everything. ‘Fucking women’ I often mutter, when I have trouble fastening my jeans. ‘Curse those sodding dames’ I moan, when I put a frozen pizza in the oven with the plastic wrapping still on. And I won’t repeat what I said when the back of my sandal snapped in the queue for the cheese counter at Sainsbury’s.

1) Being a tit for charity

I remember the days when charity fundraising involved wearing a Panda costume and standing in the Kwik Save car park waving a bucket, but those days, my friends, are long gone. Now you can do your bit by simply taking a photo of your knockers – next to some Vimto or a bag of Space Invaders – and sharing it with thousands of lonely wankers on the internet. Isn’t that nicer than a tombola?

However, a word of warning: take part in these fake charity schemes at your peril. After all, your tit pics might turn up on murky, degrading websites run by creepy old gits who mock women’s bodies and use them for profit. Like the Express online. You’ve been warned.

So. That was nice. All is well in the media as you can see… Think we need a lie down, a cuppa and some kind of lobotomy. Have a lovely weekend, we shall endeavour to, Iris has a swank wedding to attend so must shave her toes and Flora is taking a friend to Habitat to advise him on dining room chairs, ie. that he needs some to go with his dining table. One of us will be having more fun. Can you guess which? Answers on a hashtag to @bloodytights