Morning lovely people, as you may or may not know this week’s count down is a bit later as we did our first LIVE version of Sexist News yesterday at Matchwomen’s Festival. All very exciting and hangover facilitating. So without further ado, here’s some shit news for yous:

This week The Sun interviewed ‘pop sensation’ Little Mix, who are, apparently, ‘all set for world domination.’

The interview opened with twelve or thirteen questions about the band members’ boyfriends, and then it really kicked into gear with these beauties:

Who has the unhealthiest diet?

What body part would you like to steal from the others?

What was your worst fashion disaster?

What is the ideal age to start a family?

Who is going to have the first baby?

Perrie,  there have been accusations that you were to blame for Zayn leaving One Direction – were you to blame?

And finally: Tell us about your dream wedding!

Isn’t this a really excellent way to promote their new single – to shame them about their diets, blame them for the demise of boy bands, encourage them to be jealous of each other’s bodies and suggest that they should breed immediately – y’know, to make that whole world domination thing just that bit more difficult.

The On page 3 of The Times this week, it seems their editorial staff are somewhat confused. I’m going to pen Rupert a letter, as he has a habit of belittling women on the third page of his newspapers. Here goes:

You may not know this, but tennis is a sport, yes, even when women are playing. Some people are even interested in watching women play sports. No, it’s crazy, but it’s true. Sadly there is no ‘Wimbledon Catwalk,’ because that would get in the way of actual tennis playing and a good solid serve is quite tricky when your centre of gravity is being buggered senseless by a pair of platform sling-backs.

So, just a tip: maybe have your right-wing lackeys at The Times look at how they report on the men’s sports, you know, without asking them about their fancy handbags and engagement rings and write about the balls they chase and hit. And have them do that for the women too? 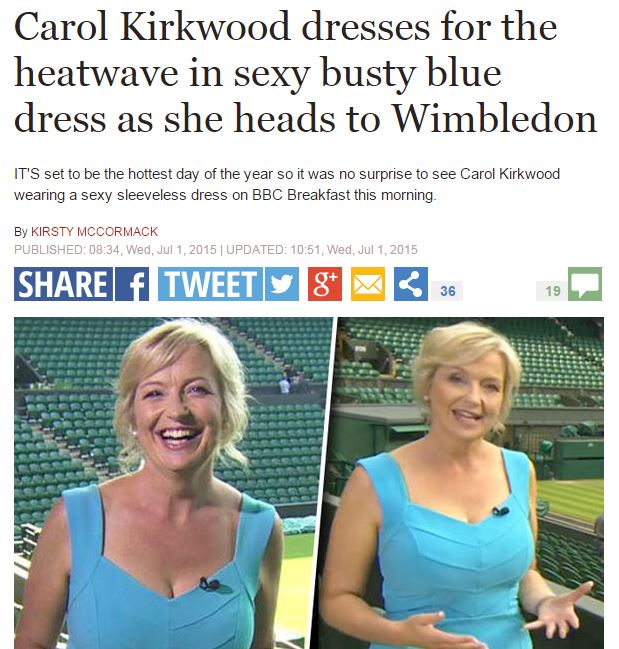 Carol Kirkwood, a weather presenter, once again presented the weather and, according to those elderly creeps at the Express, she ‘dressed for the heatwave, pouring her curvaceous frame into a busty blue dress.’

Well that sounds like an effort in the hot weather, doesn’t it?

But, then again, she was at it in winter as well, showcasing her assets in those busty jumpers. Also known as jumpers.

Yes, the Express are obsessed with Carol’s knockers, and they pathetically attempt to make them somehow relevant to the weather, every single day.

Michael Fish didn’t have to put up with this shit. He was never accused of squeezing his testicles into those polyester trousers to symbolise a warm front, and I never heard anybody say anything smutty about his isobars being tightly packed. 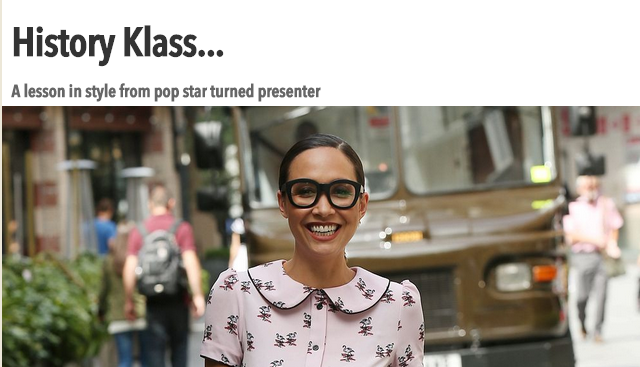 Oh Mylene and her Littlewoods touch – it’s like the Midas touch, but polyester. A woman of substance, pianist, knicker wearer, fearless opponent of Ed Miliband and children’s party gift lists, she is a lesson to us all. And this week’s lesson is wearing a dress and large spectacles. Someone spaffed 47 words on this bit of BREAKING NEWS.

I wonder if working at a tabloid, such as The Sun isn’t in fact some kind of punishment or room 101 for copywriters from hostile regimes who have been rendered by MI6. Perhaps it is in fact a genius and specific form of torture. Just reading this mind flob is enough to demoralise a captive audience. If I had to see endless photos of minor celebrity’s dresses, nip slips, diet successes, diet failures, ‘new looks’ and accidental fanny flauntings and be obliged to describe it so it appears to be in the public interest, I’d break and tell anyone who’d listen where the nukes were. 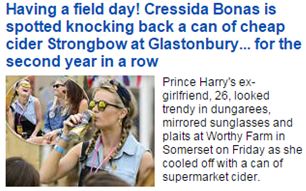 Cressida Bonas, 26, who dated Prince Harry for two years and is now single, was pictured in the Daily Mail drinking a can of ‘cheap cider’ in public at a festival for the second time in two years! What kind of woman would drink alcohol in the sunshine at a festival in public? And this was a can of cheap cider, not one of these fancy French ciders that no one dare pronounce – it was a can of CHEAP cider.

Has this woman no shame?

A major news story from The Sun, who this week reported that a Romanian telly presenter we’ve never heard of washes her tits everyday –  in a wooden bucket in the back yard – to keep them looking nice. This, according to Roxanna Ionescu, 30, is ‘the secret to having ‘impressive boobs.’

I have two problems with this otherwise cracking tip: firstly, where, in this century, can I buy a wooden bucket? Wilko don’t sell them; they only sell plastic ones.

Secondly, do I actually have to wash my tits everyday? I don’t think I’ve ever washed my tits on purpose. I’ve washed them by mistake when I’ve been washing something else, but I’ve just never got home from work and thought ‘GOOD GRIEF my tits are FILTHY, so filthy I can’t even wash them indoors – I’m going to have to take this outside.’ I mean, we even washed the dog in the house, and that’s after he’d been pissed on by the other dog, so how dirty can they get for you to have to wash them in a barrel next to the compost bins? What is this woman doing to get them so filthy? 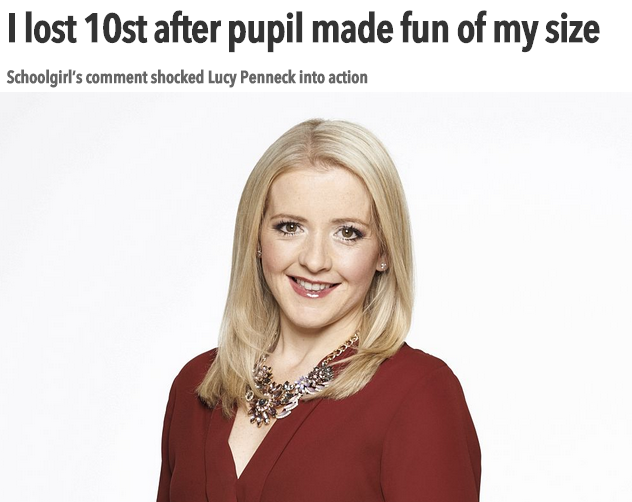 Another fun lesson about personal development: humiliating people is for their own good. The Sun might be onto something. Maybe the NHS are missing a trick here, sod spending an undisclosed amount of public cash on sending people to Weight Watchers. They could deploy groups of pheromone drenched youths to church halls all over the country to laugh, point and shout ‘fatty’ at people.

It could work for all kinds of things. Maybe I could hire myself a year 9 student with an attitude problem to make passive aggressive comments about my finances, it might spur me on to actually do my tax return.

Think of the wider potential; The Sun could blaze a trail here. Imagine if they used their wide reach to share valuable shaming messages that bully and harass people who don’t conform to various societal norms? Oh, hang on…

So, a man tried to rape a teenage girl; so far so hideously normal. This young woman, terrified out of her wits, defended herself and bit his cock off. But she’s the savage… curious.

The Star have some interesting priorities here, they seem more preoccupied by the fact that a dude’s wang got mangled, than the fact that HE TRIED TO RAPE SOMEONE. A tip for rapists and potential rapists, if you put your nob in someone who’s not CONSENTED to its insertion, you might end up losing some of it. You are CONSENTING to ending up sans nob. How d’you like them apples?

Can hanging upside down REALLY improve your skin? A FEMAIL writer dangles by her ankles to find out

The Daily Mail’s Femail section, which floats into our life like a bloated turd every Wednesday, poses the crucial questions on the lips of every desperate woman in Britain. This week, they asked ‘can hanging upside down really improve your skin?’ Can hooking your knees over the back of the settee and hanging down the back like a worried bat get rid of wrinkles, unwanted crevices and unsightly blemishes? The answer is yes, definitely, it will definitely work; the furniture won’t tip over and you won’t fracture your hip and scare the cat. Doing this WILL turn back the clock and make you that little bit less grotesque than last Wednesday, when Femail posed the question: ‘would you slather liquid rubber on your face for perfect skin?’

So, to summarise, your optimal daily beauty regime should involve washing your tits in a Vileda Supermop bucket – outside, in the gap between the fuchsia bush and the bins – followed by melting a rubber glove on your face and dangling upside down from the shower curtain rail all day, until it’s time to make your husband’s tea. 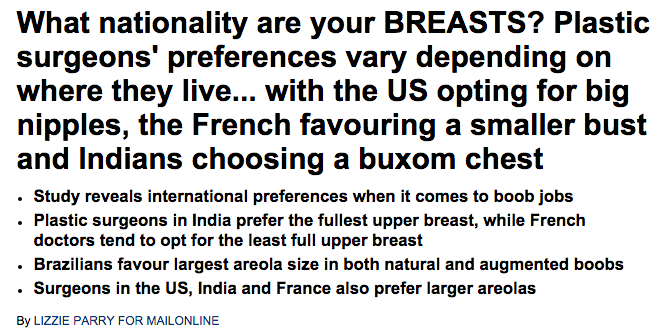 Not content with fixating on the nationalities of entire human beings and whether they should be in the country or not, the Daily Mail wants to know where your tits are from. Presumably, they will be calling on Teresa May to deal with this very pressing issue. Don’t be surprised if you soon see a Change.org petition asking for any rogue knockers without appropriate working permits, to be deported at the earliest opportunity. My tits are currently safe as they appear to be German* (small areolas) but if we leave the EU I may be forced to have them repatriated. To help prepare for this potential difficulty, I’ll be renaming them from Brenda (right) and Ethel (left) to Angela (with a hard ‘G’) and Helga.

So there you have it, a vat of news-slurry. You. Are. Welcome.

After all of yesterday’s excitement and Strongbow, Flora is heading back up north and Iris is mainlining alkaseltzers. Thank you to those that came to Matchfest and laughed at our jokes, we had a great time!