I have a small confession to make. I have a shoe problem. No, not that kind of shoe problem; I’m not a wildly uncool, clumsy, gin-addled Carrie Bradshaw wannabe, I look like something from the Hippopotamousse adverts in a tutu and I never watched more than one episode of Sex and the City anyway – it gave me hives, so I decided to just watch The X-Files over and over again instead. The life lessons were probably more applicable to me than those from SATC but, much as I love Gillian Anderson, Scully’s wardrobe was only aspirational for those with a fetish for lab coats, court shoes and shoulder pads; my dalliance with lab coats ended when I quit my Saturday job at the chemists. No, my shoe problem is that I’m shit at them.

I wasn’t always shit at shoes, as a kid I was an unrelenting bore for all things pink and glittery, I had to be dragged wide-eyed away from jeweller’s drooling and asking my mum what was the point of a credit card if they didn’t buy excellent things with it? Now, the Clarkes shoes that had the JEWEL ON THEM were the GRAIL; a shoe/sparkly combo, how would that ever get old? I never got any. Thanks mum. I think maybe I’d be better at doing shoes now if I’d been able to have those, my delicate feminine sensibilities were stunted thanks to a prudent domestic budget, so think on parents of whining children; what might you be doing by denying your offspring fripperies? To be fair though, consumer culture is trying to make sure all girl children grow up wanting to be princesses who appear to have been dunked in glittery pepto bismal, so it’s not as much of a worry these days.

Literature only fueled my footwear excesses; I loved Mister Magnolia, by Quentin Blake, but he had a shoe trauma in that for some reason, he was dicking about with only one shoe on (probably LSD or Absinthe related judging by his attire and apparent lifestyle). I also remember a poem in a picture book about buying shoes and how grown ups buy boring shoes and really we all just want the ‘red and pink and blue shoes.’ Well, it turned out to be prophetic since, though I have some interesting, though ill-advised footwear, I spend most of my time in brown Cat boots that make my legs look stumpy (they do, however,  have steel toe caps, so I could give a potential sex-pest a really good kicking – practicality is sometimes a boon). But I do wish I could be more extravagant, more va va voom, more Mister Magnolia, but with two boots and less flute.

Anyway, as is customary with my blogs, I would like to share with you a small list of mishaps that happened at the business end of my legs whilst trying to be more bold and trendy (the business of walking, nothing to do with my foof, that’s a whole other blog). I hope this helps others who have had similar shoe distress, in some small, touching way. 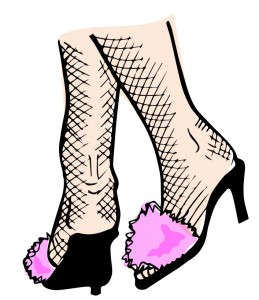 I have owned 3 pairs of kitten heels, why, I do not know, the name alone makes me want to vomit bits of feather boa. Presumably they’re called kitten heels because the idea is to sashay about like a ’60s ‘sex kitten’ purring witticisms and tripping lightly down staircases leaving a trail of broken, dribbling men in one’s wake, and not because they somehow make one resemble a small domestic mammal that spends most of its time sleeping or up its own arse. For me, each pair has been more of an abortive disaster than the last. Kitten heels are for women who are my nemesis, my polar opposite, kitten heels are for holograms. And kitten heels are definitely not for walking across a soft lawn and kitten heeled mules are certainly not for vigorous dancing lest you wish to take some poor, unsuspecting sod’s eye out. 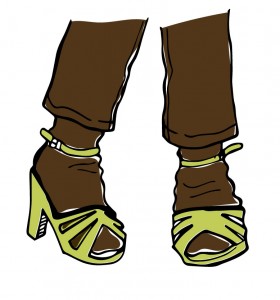 I have 2 pairs and I love them; they were my grandmothers before she got sick of me asking endlessly to try them on when I went round there. She’s still not capitulated with the rainbow wellies, but I’m working on her. So. Cool strappy retro shoes, what could possibly go wrong? You’d wear them with a cute shift dress and ribbed tights and cat eye glasses right? Ha. I wore them with socks. Brown socks. And brown trousers. And it was February. And I stood in a puddle…I’ll get my coat. 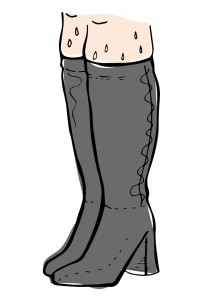 Everyone was wearing knee high boots, e-v-e-r-y-o-n-e. Except me. As women with calves that would turn Robert Crum’s head will know, long boots with that elastic bit seem to have been a fairly recent phenomenon, so nice looking leather boots for sturdy ladies were right out. But, there was hope in the form of stretchy, plasticy boots from Faith. Ah Faith, we all knew the heels would fall off at the most inopportune moment, but we didn’t care. Not only did the weird conical heel snap off when I was crossing the road, those bastards made my already less-than-ideal calves sweat like motherfuckers. 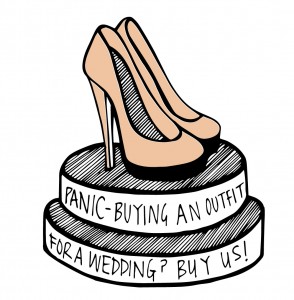 A) I couldn’t walk, I could only shuffle. B) They started to hurt approximately four minutes after getting out of the cab. C) I looked like I’d had a personality transplant. D) That is the last time I’m wearing anything but flip flops to a fucking wedding. 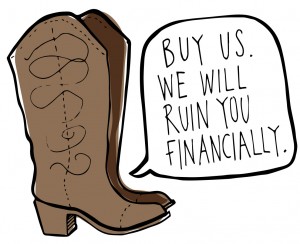 I yearned for a pair of cowboy boots; I’d seen a woman in Brighton in a lovely, slouchy, silver jumper dress and with lithe tanned legs wearing some on a night out. I could BE her. I really could, it was all about the boots, they would change me into someone that swaggered in a chic and non-deranged way. And after wanging on about them endlessly and trying on a jillion pairs, I got some, from Office. This was it. I was going to be ACE in these boots. And I was a bit, sort of…until I walked down a really steep hill in them in the rain, they didn’t have grips on the bottom, I fell over backwards with incomparable grace and landed on my iBook and broke it. Those fucking boots cost me £700. 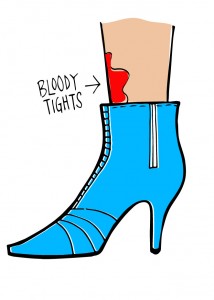 Another Faith purchase, a bargain at fifteen quid in the sale and sadly these suckers were indestructible. They were me trying to channel some eccentric 80s ironic cool. The description of them alone should alert the reader to the godawfulness of these foot catastrophes. But I was giddy with fashion and turned a blind eye. The blind eye turned to weeping eyes when the reason for ALL the stock of these boots being on sale became apparent: basically their poor design mean a rigid plastic bit at the front rubbed against one’s shin so forcibly they drew blood within 10 minutes of leaving the house. I walked around all evening tentatively, with bloody effing tights.

So, fair readers, I’m effectively hopeless at cool, lady-shoes, I’m the Imelda Marcos of foot-fashion disasters and woman kryptonite to foot fetishists everywhere. Despite it all, I’m optimistic and am currently jonesing for a pair of animal-print wedge creepers which will render me about a foot taller and even more likely to end up in A&E than usual.

I wish you all safe transit on foot and may your lives not be blighted by kitten-heel related mishaps.