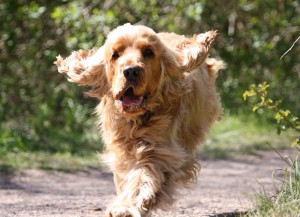 Last Boxing day, when I was too full to do a jigsaw or argue with my dad, I sat in the chair near the cat litter tray with a bottle of sherry, and stared at the wall for six or seven hours. Ignoring my mum’s conversation about whether Jeremy Irons had been born a woman, I started to think about my life. Just as I was envisaging the whole community grief-stricken at my imaginary funeral, the next door neighbour’s cat ran in through the cat flap and did a massive shit in the litter tray at my feet.  It was existentially traumatic.

As I stood outside in my slippers, leaning on the wheelie bin with a glass of Croft Original in one hand and a bag of Fluffy’s turd in the other, I saw three women wearing day-glo Lycra jog past. FREAKS! I thought. LYCRA! On BOXING DAY! What wankers! Why don’t they just piss off and GET A LIFE! I went back indoors and watched a film about ghosts with Maggie Smith in it and ate two jam tarts, but I couldn’t get the vision of the Lycra-clad runners out of my head. ‘Mum,’ I said, ‘I’ve just realised that I’ve never, ever run anywhere in my life. Except for running for buses, and that doesn’t count.’ My mother stared at me blankly. ‘Well, I know you never did P.E. love, but you ran like the clappers to the chemist when you got nits off that kid that looks like Angela Lansbury, and that was after you’d eaten that massive trifle for the Royal Wedding, so you can’t be that unfit.’ This got me thinking. If I could career down a dual carriageway pissed on sloe gin, crawling with nits and full of Elmlea then, if I actually tried, if I had the right gear and didn’t eat Toblerones, maybe I could properly run.

On 3rd January, I went to Sports Direct, a sort of preparatory dogging ground for passive aggressive teenagers, who feel each other up in massive queues whilst breaking wind freely. It was in the changing rooms that I discovered two things: 1) that most sports clothing manufacturers hate women and 2) that female runners know of a secret supplier, who fashions magic leggings that hold in your stomach, lift up your arse and make the outline of your knickers disappear. Now, not to be big headed or anything, but I’m not grotesque. My legs and arse just look like legs and arse, I don’t have any sort of major weird shit going on. But whenever I tried on a pair of running ‘tights’ I looked like a  bloated Bonfire Night Guy stuffed with sausage meat, dog shit and gravel. In a panicked frenzy, I bought a pair of shiny leggings with a pretend skirt attached, which made me look like a possessed fan of skort-loving nineties pop quartet, B*witched.

After my first three runs and the self-loathing, pain and horror that ensued, I asked my brother for tips. ‘The problem is,’ he said, ‘you run like you’ve got wasps after you. Stop flailing your arms about and pulling that face. And you’ll knacker your knees doing it like that. But, then again what do I know, I’m not Fatima Whitbread, I know toss all about running.’ I pointed out that Fatima Whitbread did Javelin. ‘Like I said’ he replied ‘I know toss all about running.’

So I sought professional advice and, whilst eating a delicious bagel, perused Runner’s World’s website, where I found the article 30 Things Every Woman Should Know About Running. This is it, I thought, this is the Holy Grail of running tips. These people know so much about running that they manage to write a whole magazine’s worth of crap about it every month. I was excited.

The tips, however, turned out to be so packed with condescending, scare-mongering, sexist wank that I picked up my bagel and hurled it across my living room. I threw it like a Frisbee, and then spent fifteen minutes cleaning Philadelphia off a cushion with a wet tea towel and muttering expletives.

That was seven weeks ago, and I’ve now calmed down enough to revisit what I saw on that angry, bagel-strewn afternoon. Prepare yourselves; here are a few dazzling tips taken from 30 Things Every Woman Should Know About Running:

‘Running with headphones outdoors is a safety hazard in more ways than one. You won’t be able to hear cars, cyclists or someone approaching who intends to do you harm. Attackers will always pick a victim who looks vulnerable. When you have headphones on, that means you.’

Cheers Runner’s World! My previous fears re. looking like a sausage meat effigy of the curly haired one from B*witched have shot RIGHT down the list of concerns. Rather than worrying about ‘Guy Fawking’ of the legs, I’m now concerned that I’m going to get massively murdered by listening to my training podcast which, as it happens, YOU recommended on your website. This is particularly irritating, as I have searched far and wide to find headphones that will accommodate my Paul Daniels sized head.

‘You don’t have to be the competitive type to enter a race every now and then. You’ll find that lots of other racers aren’t overly competitive, either. They’re out there because it’s fun and social, and it motivates them to keep on running.’

What a helpful tip for the ladies! Runner’s World clearly understands that women are never competitive, ever, but know that they LOVE being sociable and having fun! That’s why most runners will tell you that marathons are a real laugh, a proper scream, and that they provide ample opportunity to discuss interior décor and dinner party recipes with like-minded athletes. People have told me they run to improve their stamina, to strengthen their muscles, to look after their heart, to lose weight, to combat depression…but I’ve never heard anyone say ‘I run because it’s fun and social.’ WHO WOULD SAY THAT? If you want to have fun and be social then sod off down the pub.

‘Unfortunately, men and women will never be equals in the urination department…Simply find a private place behind a tree or dense shrubbery, squat and pull the lining of your shorts over to one side.’

This is real. This is an actual tip from Runner’s World. Whilst the tips for male runners cover nutrition, training, pronation and injury prevention, the tips for women tell us how to have a wazz in a bush.

‘There’s no need to miss a run or a race just because you’re having your period.’

I’m thirty three, Runner’s World. I’ve had approximately 239 periods. During those periods I’ve done things like dismantle five MDF bookcases with a miniature plastic spoon in lieu of a screwdriver, babysat for four children with diahorrea in a caravan in Mablethorpe and had actual sex with a man. Books and life have taught me that it’s OK, nay, even encouraged, to move whilst having a period.

‘It may not be much consolation, but men are sometimes verbally harassed and occasionally threatened on the run, just as women are.’

‘Just because you’re married and have young children and a job doesn’t mean you don’t have time to run…You need this time. Taking it for yourself (by letting your husband baby-sit while you run, for instance) will benefit the whole family.’

Question: can you babysit your own child?

‘Morning is the best time for women to run, for lots of reasons. First, it’s the safest time; statistics show that women are more likely to be attacked late in the day.’

‘Women who run alone should take precautions. Leave a note at home stating when you left, where you’ll be running and when you expect to return. Carry a personal attack alarm. Stick to well-populated areas, and don’t always run the same predictable route. Avoid running at night and don’t wear jewellery. Pay attention to your surroundings. Carry identification, but include only your name and an emergency phone number.’

Good Grief, I want to do Couch to 5K, not join the KGB.  Why would I wear jewellery, Runner’s World, why? And what sort of ID features only my name and phone number? Must I carry one of those little gold tags that fancy Labradors wear on their collars? Which leads on to my favourite ‘tip’ of all:

‘Running with a dog gives you the best of both worlds – you get to run alone, but with a friend. A dog is both a faithful companion who will go anywhere, any time, and a loyal guardian who’ll discourage anyone from harming you.’

Now, I have oft seen the cover of Runner’s World magazine, and it usually features an athletic woman with blonde hair, scampering over Scarfell Pike in tiny hot pants and a yellow bra. Never, ever is this woman pictured chasing a Border Collie across Tesco’s car park, with a bag of shit in one hand and a rape alarm in the other. 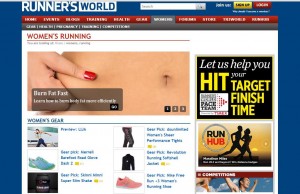 To top it all off, the ‘Women’s’ section of the website features a massive stock image of a model with a perfect manicure pinching her waistline, just to gently remind us all that we’re fat and disgusting. Other gems in this ‘special section’ for women include tips on how to run with a buggy and reviews of some nice pink shoes.

So, to summarise: we’re all fat and we’re going to get killed. Buy some cerise trainers and get a Red Setter and you might be OK, otherwise, stay indoors.

Thanks Runner’s World, thanks loads.