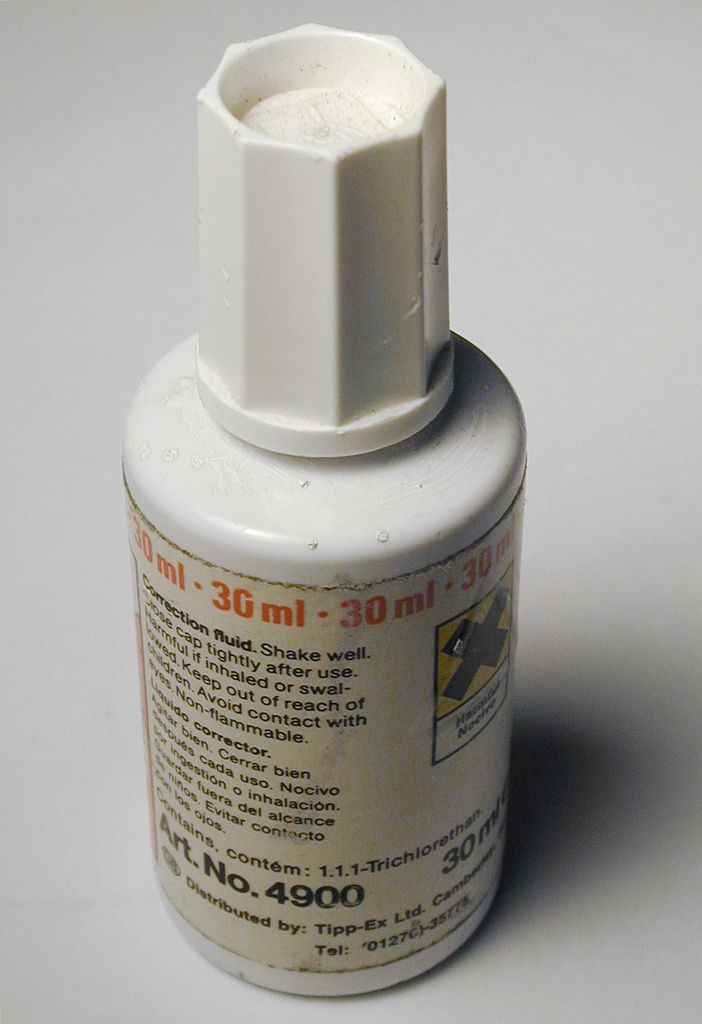 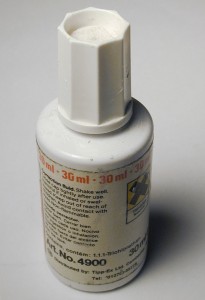 Oh David Dinsmore, the most misunderstood man in Britain. Wimmin, we’ve had him all wrong. I know, I know, when he took over as Editor of The Sun last year, we all thought ‘here’s a pervy bloke in a slightly shiny suit, who likes to publish pictures of teenagers’ tits for money.’ But no! We were wrong! All along, he’s had our best interests at heart and, thanks to The Sun’s collaboration with breast cancer charity Coppafeel, Page Three can now actually save our lives!

Foolishly, I’d always thought that Page Three existed to give lonely Sun readers a diverting lob-on during those otherwise ‘trying’ journeys on the X78 to Doncaster, but not any more. Or at least, not on ‘Check ‘em Tuesdays,’ when the topless models appear alongside a helpful blurb, reminding women to check their breasts for cancer symptoms. Additionally, the models have the names of ‘family friendly’ male entertainment stars scribbled on their tits: last week Lacey Banghard appeared with ‘Ant’ and ‘Dec’ scrawled on her breasts and, on Tuesday, Lucy Collett had ‘Bill’ and ‘Ted’ inked on hers. Now, at first glance, this ‘tit scribbling’ appears to be the sort of thing that might occur during a Blue Nun fuelled hen night in Rhyl, and seems to have nob all to do with preventing cancer. Not so! It’s The Sun’s ‘fun’ way of encouraging women to get to know their bodies! But, aside from the fact that naming breasts after male TV personalities infers a creepy male ownership of women’s bodies, it’s just plain weird. Who in Britain (aside from my mum’s friend Crossword Kath), loves Ant and Dec enough to name their tits after them? And Bill and Ted? ‘Bill’ hasn’t even been on telly for twenty years, is that really the best they can do? We can only look forward to the next few weeks, when Dinsmore and his pals run out of suitable male TV duos, and Page Three models turn up to work with ‘Ted Rogers’ and ‘Dusty Bin’ written on their tits.

But there’s more! The Sun doesn’t merely advise you to name your mammaries; you are also encouraged to tweet pictures of yourself checking your breasts. Jejune prude that I am, I always thought that checking your body for cancer symptoms was best done in private whilst listening to repeats of Gardener’s Question Time but, apparently, the best way to do it is in front of hundreds of thousands of complete strangers on the internet. A number of women duly shared images of themselves ‘checking’ their breasts and countless followers posted supportive comments, offering their assistance in the procedure. Model Jess Davies ‘copped a feel’ whilst sporting a tiny Chihuahua-sized T shirt pulled up above her breasts. ‘Want a hand?’ asked a helpful chap; ‘I’ll check the other one’ chirped in another cancer-battling gent. Jodie Marsh, referencing the enduring link between breast cancer and fetid, undead predators, tweeted a photograph of herself in a revealing vampire costume in honour of ‘Check ‘em Tuesday.’ A number of ‘fans’ then made heart-warming references to sexual assault, with one man stating ‘I’ll check yours Jode # cracking set.’

A bevy of glittering celebrities have also jumped on board, including former member of boy band A1, Mark Read, who did his bit for cancer by posting a picture of himself groping a cardboard cut-out of Mariah Carey, whilst pulling a Frankie Howerd ‘oooh missus’ face. Trilby sporting ‘geezer’ Olly Murs followed suit, posting a photo of himself squeezing a pair of imaginary tits, accompanied by the tweet ‘HEY lads join me in supporting @TheSunNewspaper breast cancer campaign. We can help the ladies out too #checkemtuesday.’ How nice that that such busy blokes can find time to challenge cancer by sharing thinly veiled suggestions of sexual assault via Twitter! Even more encouragingly, Page Three ‘fans’ have been annotating Check ‘em Tuesday photos to show their support for the cause. Model Lucy Collett helpfully shared one such image via her Instagram account, along with the words ‘best Page Three drawing today!’ The resulting image shows her official Coppafeel photoshoot, annotated to include two giant penises spurting semen all over her face. How confusing that The Sun insists Page Three is an innocuous, non-sexualised celebration of youth and freshness, when the models themselves are convinced it’s wank material. And what better way to support and respect women who are living with cancer than with an illustration of a facial cum shot? Perhaps next time Coppafeel will collaborate with Viz. 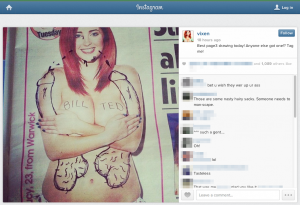 In the meantime, I’ll ward off cancer by dressing as a sexy witch with ‘Bernie Winters’ and ‘Schnorbitz’ written on my tits in Tippex. If only Marie Curie had known that’s all it takes.

The Sun Run Out of Tit Names

Further to the ‘Coppafeel’ Page 3 campaign’s epic fail on the ‘being for women’ front, whilst being a runaway success on the ‘being for dudes who like spunking over pictures’ front, it seems, as predicted, conjuring ‘double-act tit names’ became a headache for Dinsmore at breakfast meetings. 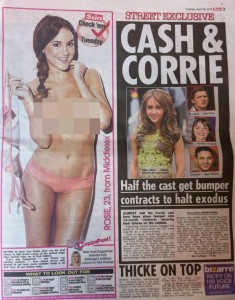 The Sun has now dropped the pretence of ‘encouraging women to get to know their bodies’ and Page 3 has reverted to full-on, Tippex-free tit pics. Today’s Check ‘em Tuesday image shows a laughing Rosie Jones checking her breasts for cancer in a new magical way, which involves pushing your breasts together with your elbows, whilst stroking your neck with one hand and holding a see-through bra seductively with the other. As usual, the supportive weekly tweets are rolling in! The first one I saw today, in response to Check ‘em Tuesday’s Page 3, read:

Coppafeel Respond to the ‘Jizzgate’ Drawing

After Page 3 model Lucy Collett enthusiastically posted an annotated Page 3 image to her Instagram account (the delightful one featuring giant penises ejaculating all over her face, see above), we know that Coppafeel felt it slightly outside their understanding of ‘breast awareness’. Possibly because the ejaculate was scribbled onto her face and not her breasts, or maybe because on a Tuesday these images are about Cancer and not masturbation or… we can only really speculate, but we do know, from a contact we met in an underground car park, that they sent their concerns to Coppafeel and Lucy will no longer feature on Check ‘Em Tuesdays. Presumably this works for everyone unless David Dinsmore decides that spaff-inspired Page 3 artwork is inappropriate Mondays, Wednesdays, Thursdays and Fridays too. Again we can only speculate wildly about what next course of action Mr Dinsmore will take to to keep publishing young women’s breasts for profit, has he run out of barrel to scrape or has he something else up his slightly shiny sleeve? Answers on a ‘harmlessly cheeky’ postcard.