Not content with huffing about the piss-poor state of women’s representation in our national press whilst doing our nails and enjoying faffy cheese fondue, we’ve decided to do a weekly digest of some of the most idiotic/pointless/unhinged/offensive (delete as appropriate) toss ‘Fleet Street’ has to offer, with some choice commentary. We would provide you with links to them, but we don’t want them to get advertising hits or you to get indigestion. Oh and some of this is over a week old, soz, we’ve been procrastinating a bit, next week we’ll be so on it.

Woman rolls about on some feathers, looks a bit daft 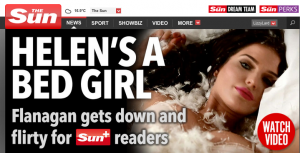 Apparently, actress and regular Tabloid flasher, Helen Flanagan having a pillow fight with herself, rolling around in the ensuing fluff and blowing awkward kisses at a camera falls under the heading of NEWS for The Sun. She has joined their staff team, as they obviously had an opening for a dual role: a woman they both encourage men to loathe and bash one out over.

Yes, you read that right. Despite being fairly well acquainted with breasts, The Star can barely cope with Ms. Brook’s chest. Surely if she is indeed in possession of such ‘dangerous’, ‘spilling’ , ‘bonkers’, ‘boobylicious’ mammaries she might appear more distressed. But she seems to be able to cope fairly well with them, maybe these dudes need to calm the fuck down. If she were running around on a float, with lasers shooting from her nipples surrounded by ticker tape, the above description would be warranted, and yet this frankly peculiar, hyperbole is a description of her getting out of a car and walking into a social function.

An excerpt from this important story

Taking off your lady mask 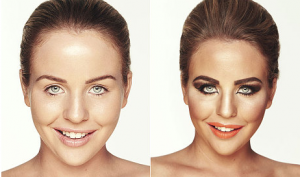 The Telegraph asks ‘Do men really think women look better without any make-up?’ Oh come on Tory boys, we all know the only possible reason a woman wouldn’t wear make up would be if it was for a charity or something.

Apparently not only as women are we likely to be total bitches to potential suitors if we don’t like them, according to some research, we make our mind up in a flash based on unconscious evolutionary natural selection and baby-making. Not, like, whether bloke in question is smart, or likes Jeanette Winterson novels, or wears chinos or is a right cock. This research is based on flies. Flies.

The role of hair in challenging cultural restitution policy 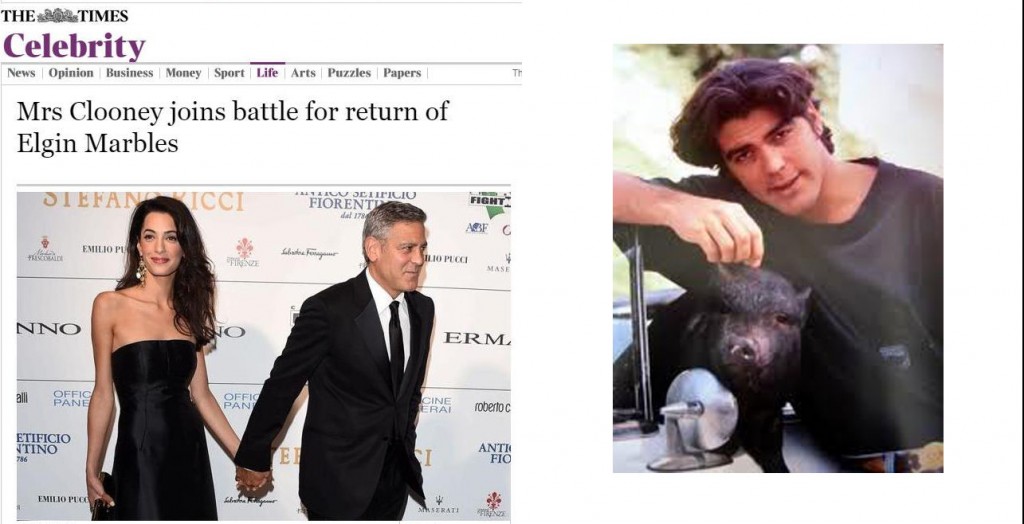 Left: Amal and George Right: George living it up as a wild bachelor

The tabloids prolapsed with mirth last week when barrister Amal Alamuddin married quinquagenarian pig aficionado, George Clooney.  Amidst the news that Alamuddin is in consultation with Greek authorities regarding the potential return of the Elgin Marbles, The Times reported: ‘as if it wasn’t enough that she stole the world’s most coveted bachelor, it now seems that the new Mrs Clooney is also looking to steal the world’s most coveted marbles.’ Running off to elicit her husband’s expert opinion on historic cultural restitution issues, The Times stressed that Dr Doug Ross off ER thought it was ‘probably a good idea if they found a way back at some point.’ Finishing with a veritable shower of turd, the article offered hope that ‘the promise of meeting a woman described by Hello! magazine as having “a cascade of lustrous hair and eyes the size of saucers”’ might encourage British Museum Director, Neil MacGregor, to revise his stance regarding the marbles’ future. Far be it from me to deny the power of a woman’s hair to change the course of foreign restitution policy, but they do know that Neil MacGregor’s gay, right?

Darling, how old does my vagina look today?

You can rely on the Daily Mail to bravely champion a woman’s ‘quest to find a natural way of turning back the years downstairs.’ Lisa Palmer of Tunbridge Wells, who advocates shoveling raw meringue in her faj states, with an unfortunate turn of phrase: ‘the real proof in the pudding is the reaction I’ve had from guys who say I have the vagina of a 25 year old.’ I’ve gone right off this Eton Mess now. 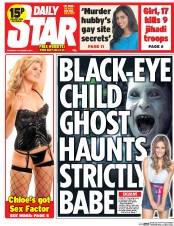 Babes beware: according to turd-rag the Daily Star, ‘there has been a sudden and inexplicable rise in sightings of black-eyed child ghosts worldwide,’ most of which appear to plague women off the telly with massive knockers. In their SIXTEENTH article published about said ghosts in nine days, the tabloid claims that an evil presence is apparent in a blurry snap of Caroline Flack arsing about in Kentish Town, thus ‘sparking fears that terrifying black-eyed child ghosts have now made their way to the capital.’ This dog-end of an article concludes by describing a previous encounter during which Flack was ‘fondled by a pervy ghost.’ The game’s up Richard Desmond – take the sheet off your head, we know it’s you.

In the wake of the tit-vacuum created by the ‘demise of the Lads Mags’ Breast cancers’ wacky PR team have stepped up and replaced raising awareness with raising the nipple count.

This we week we were treated to another round of Coppafeel at it’s very best… young women’s tits, named after men, in aid of ‘awareness raising’. It would seem that being less than a page/click away from young perky tits at any one moment means we’re just not aware enough, so every d-list sleb from here to Belfast is donning a pink two set just to remind us. In three spectacular non-stories, Matalan fan Abbey Clancy, fashion bore Kate Moss and sexy calendar peddler Georgia Salpa show us that the cure for cancer lies in making the boys wink. Or as Stella McCartney puts it, sexy underwear ‘reminds women to keep healthy.’ Thanks Stella, I’ll remember that once I’ve figured out how to attach that pink ribbon to my right nipple.