So. That Friday feeling. Slightly sweary and in desperate need of one of those glasses that holds 12 cubic litres of wine? Yes, us too. You’ll be unsurprised to discover that there is still some sexist news knocking about, tossers willing to write it and plenty of people ready to chew it all over as reasonably factual. Hurrah. Long live the ‘free’ press!

Hello Jason Chester, yes we can see a bit of JLo’s bra can’t we, but she is wearing MASSIVE culottes. They’re so massive she could probably rent out storage space. So really, she’s left loads to the imagination, I imagined that after all. I can also imagine what it might be like for you if you had something worth writing about. You might stop being a massive bitch for the Mail Online, you might chillax, ask yourself some important questions and realise you’ve been giving Paul Dacre a lacklustre semi in exchange for some money. I do hope it’s worth it Jase.

We love the phrase ‘private life.’ It signals, with just two words, that there are some bits of your life – for instance your actual privates – you control access to and wouldn’t allow a man with a lob-on and a telephoto lens anywhere near. Poor old Kim K.

Using clips from ‘Keeping Up With The Kardashians,’ in which Kim’s PR people make it clear they’d show her having smelling her finger if someone paid enough, the Daily Mail show Ms K. seemingly having IVF and then get quotes from some human slug trail to the effect that it’s not worked.

The bleak message here? Pay enough and there’s no area of your life which some mirthless cockend, with a massive overdraft to clear, won’t photograph and film. And no dear, dear friend who won’t become a ‘source.’ Still, if they want to bung us twenty quid to watch us Veet-ing ‘fuck off’ into our minge hair, we’d give it serious consideration.

Show too little skin and you’re obviously a frigid, fire-breathing gorgon who lives to gargle with men’s tears. And show too much and you’re a trashy slapper. At least that’s the message the Daily Star urgently, yet bizarrely, wants to communicate to Nadeea Volianova.

She’s presented in the Star in a ballgown, ‘over-flowing’ from it. Aside from the Star’s laughably judgemental bias, women unable to remain in solid form has long been a concern of TWISN, and it’s becoming more prevalent. What is causing women to change state like this? Is it something in the water? Is it botox? Are these women having an allergic reaction to prosecco? Be vigilant. If you see a woman starting to ooze, spill or overflow, call The Daily Star hotline: 0208 612 7373

Oh Martin Daubney, bless him, he’s so confused. (Hello Martin, yes, we know you use Google Alerts for variations of your name). In this jumbly pool of dribble, ex-Loaded editor and poor man’s David Dinsmore wannabe, Daubney asks, ‘do men really prefer brains over legs and boobs?’ There have been some surveys, which Martin doesn’t believe, though he often likes to take the opinion of one person, say, Polly Vernon writing about being a cougar and Hot Feminist and ascribes said opinion to ALL feminists. If I were a complete shrew*, I’d say Martin skews things to fit his own wearisome agenda. Anyway, he says, NO WAY do men prefer brains to looks. BUT maybe we should all just love the one we’re with even if they’re uggos. Aw Martin, you make me want to ruffle your silly beard.

Everyone? That’s the end of feminism. It’s finished. We can all go home. Why? Because the Telegraph’s Allison Pearson says so. Wolf-whistling, she says, is just a bit of ‘cheeky admiration,’ the girl who called the police was ‘over-reacting’ and, besides, there are ‘big bad wolves’ out there.

Overlooking the fact that this is like calling the police to a burglary and them opining that they can’t be arsed to do anything about it because, you know, Harold Shipman, Pearson says that it ‘brightens your day’ is ‘harmless flirtation’ and an instance of ‘male interest.’

Oh Allison, Allison, Allison. Since you were a cheerleader for rapist Ched Evans, it’s hardly surprising you’re un-fussed by such ‘male interest.’ The deep joy of an unimaginative declaration of entitled lust, we’re so glad it brightens her day, just think how giddy with excitement she’d be if a bloke with no socks on cornered her in an alleyway saying ‘you know you want it.’ Oh Allison, you ball bag. 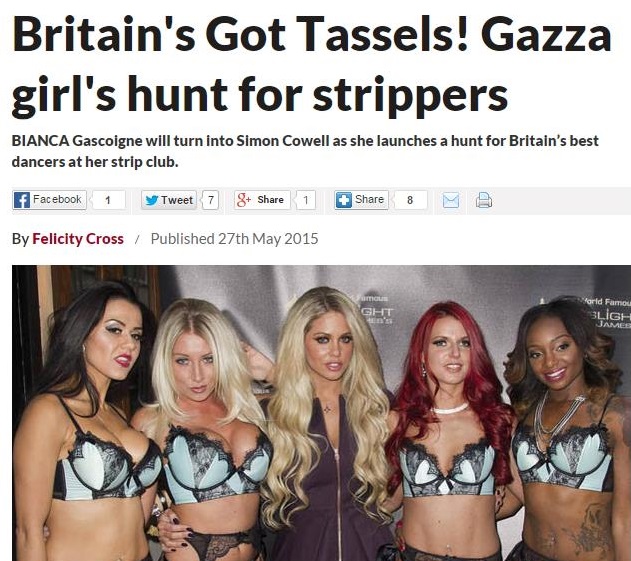 Yes, there’s X Factor and Britain’s Got Talent and The Voice and Pop Idol and American Idol and Celebrity Dog of the Year and all that shit, but what’s the glaring omission from all of them? That’s right – vaginas. There isn’t a single vagina on show in 99% of these contests. Luckily, Bianca Gascoigne is set to change all that, with the launch of her Britain’s Best Stripper contest. In this Daily Star article, Bianca, who owns a strip club in London, says ‘I want to be the female Peter Stringfellow, 1,000%.’ Wow. What a life goal. And what dreadful maths.

At the bottom of the article, the Star inform their (three) female readers how to enter the lovely Great British Vagina Competition. That’s nice of them, innit?

Like all women, I fret constantly about how bright my flannel is, so thank goodness the Daily Mail have published this article – presumably reprinted from a 1953 edition –  in the Femail section.

Extra points for trying to encourage us all to dread summer, because ‘we’ll soon have grass and mud stains to deal with.’ OH SHIT, not grass! Anything but fucking GRASS! Roll on winter and the Great Freeze.

Here’s a heartwarming, romantic story, courtesy of the Express: a bloke who is probably off the telly has married a woman who is probably off the telly, and he’s ‘introduced’ his new wife to millions of strangers on the internet by tweeting a photo of her arse. Isn’t that nice? Apparently, no one is allowed to see pictures of them in their wedding clothes because it’s too private, so it’s thoughtful of them to share photos of their anuses with us, isn’t it? 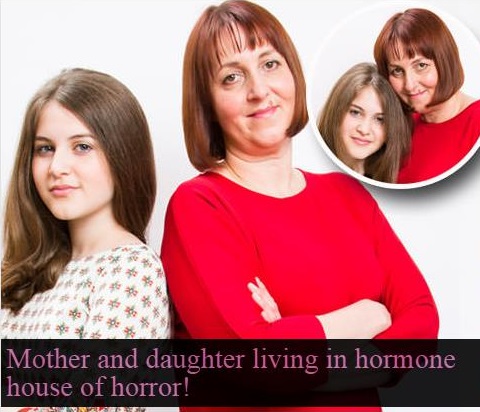 OMFG. The Daily Mail have found a woman who is currently, as we speak, teetering on the very brink of Menopause. As if this wasn’t hideous enough, her daughter is having periods. Isn’t that effing disgusting and massively newsworthy? It’s the man of the house that I feel sorry for; how is he supposed to watch Top Gear or build a shed with these bothersome females oozing and shriveling all over the place?

Can’t all women with things happening or not happening ‘down there’ just piss off to Norfolk until it’s all done with? 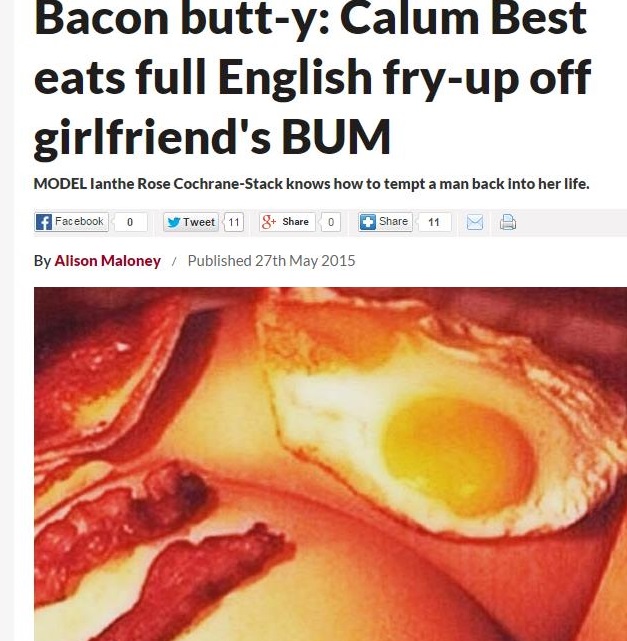 Absolute bellend Calum Best has put an egg on a woman’s arse. This is NEWS according to the Daily Star. I think it’s supposed to be sexy but, in order to avoid tipping boiling fat all over his girlfriend’s most delicate area, the breakfast must have been served up cold. I have thought about this at length, and have come to the conclusion that the only thing more disappointing than a cold fry up would be a cold fry up that has been shoveled off somebody’s arse.

Also, it must have taken a great deal of time to cook the breaksfast, let it cool, arrange it on a woman’s arse, photograph it, fanny about in photoshop and then share the pictures with thousands of wankers on the internet. That’s a wasted Sunday in my opinion. Next weekend, why not eat a hot egg and then take a trip to Chester Zoo or Granada Studios instead? No, my mum says Granada Studios closed to the public fifteen years ago, but the National Coal Mining Museum is nice, apparently.

Gah. And a bit more gah. Right we feel a bit dirty now; time to put on some deodorant to cover up the honk. We’re sorry as always to have brought this bilge to your attention, ignorance is bliss after all. But we figure, we’re delving into a little slice of hell and you might as well all come with us.

P.S. In other news, The Daily Hell yesterday posted a vile piece suggesting Brit holiday makers were experiencing misery because Greek Island Kos is being spoiled by all the poor refugees from Afghanistan and Syria… They do like to whip up hate for anyone who doesn’t order egg and chips in foreign parts don’t they? So with that in mind, please sign the petition to close Yarl’s Wood detention centre here in the UK, no doubt The Mail would like all asylum seekers dealt with in an unpleasant fashion. Thanks gals and guys xx
https://www.change.org/p/theresa-may-british-home-secretary-end-the-detention-of-women-who-seek-asylum