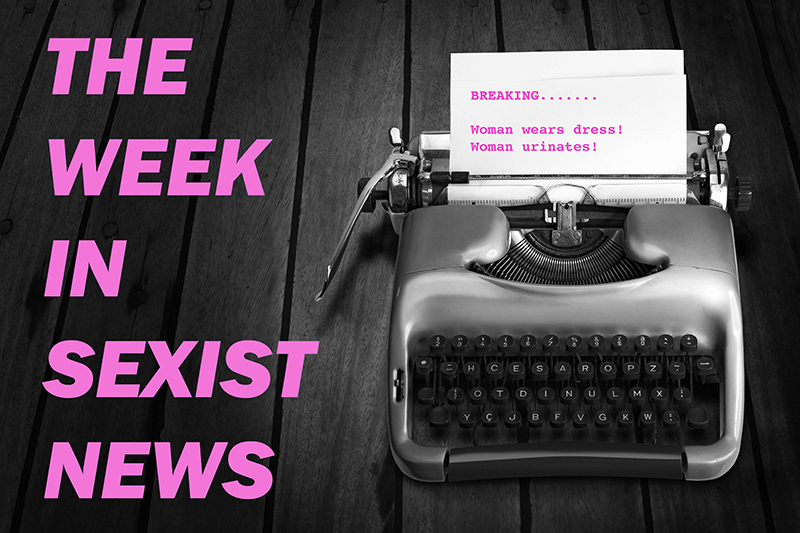 Hello dear readers! Come in! Take off your shoes and try not to wee in the corner. Welcome to this delightful parallel dimension where shoes save lives, gloves are in peril and saying please and thank you is more important than being a hot shot gunslinger at whatever it is you wish to excel in. Welcome to Friday and your overdose of sexist news!

10) The Sun do love a calendar 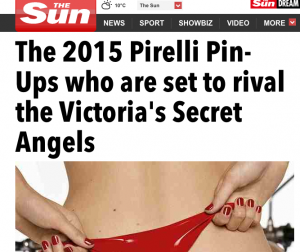 The Sun has a beef with Victoria’s Secret, as discussed in our ‘Halloweeen Special.’ They are not very keen on their use of a damaging idealised body type being used to sell knickers. Not one bit. And so they’re sticking the boot in by showing us lots of pictures from the Pirelli calendar… Yes, that’s the Pirelli calendar which “[represents] the stereotypes that the fashion and star system impose on us right now” and “this will hurt the coveted Victoria’s Secret Angels who pride themselves on being the sexiest women in the world.” OK, so, what now? Are they trying to start a cat fight between pictures of women in thongs? Are they just using this moral high ground as an excuse to show pictures of women in thongs? No, surely not. That’d never fly with Dave ‘Sylvia Pankhurst’ Dinsmore and his championing of all things gender equal! He’d eat his shiny, shiny suit before he let his staff use gratuitous nudity to get readers! Even the buttons.

There are lots of pictures of Kate Moss knocking about, which is hardly surprising since being in photos is her job. She’s been known for strutting, sashaying, and even oozing; we at Tights nerve centre would be interested to know if she’s ever hopped or skipped as a mode of transport. Anyhow, she’s also known for gadding about with toffs, royalty and, err, Jeremy Clarkson. Her choice of company aside* we would like to direct your attention to The Daily Mail’s unbelievable scoop. They seem to be surprised that Moss is NOT ONLY wearing a latex dress (handy for wearing out to dinner, in case one spills one’s soup or lasagne or whatever Cordon Bleu one happens to be scoffing) but that it shows her ENTIRE LEG. Yes, you heard it here first ladies and gents (or there, if you tackled the immense peril to your mental health that is The Mail Online). Her ENTIRE LEG.

*what is it about objectionable men and high-waisted trousers? 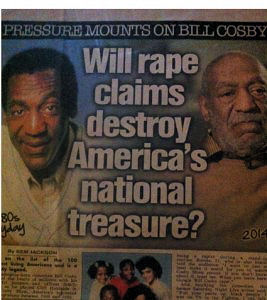 Poor, poor Bill Cosby. When are these evil women going to stop coming forward with these rape ‘claims?’ Don’t they know that he’s a ‘comedy legend’ and a ‘national treasure’? They’re spoiling everyone’s whole week. Plus these allegations are leaving his fans ‘reeling,’ which we can only presume is worse than having been sexually assaulted. Will no one think of the FANS?? AND it seems his new pilot ‘may now never go to air’ AND…he’s 77! 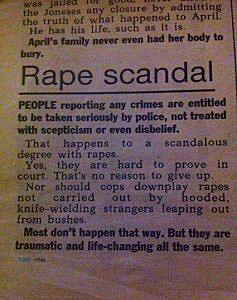 As if an attempt to cancel out the horror that is this full page spread, The Sun bizarrely printed – on the same page – ‘The Sun says’ which, in case you were wondering, is the tabloid equivalent to putting ‘not’ at the end of every sentence. 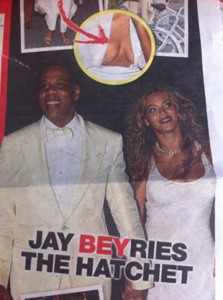 In perhaps the most chuffingly idiotic and pointless coverage of this non-story, The Sun shamble through a thicket of complete toss (which included a marriage, famous people boobs, white suits and a case of hives) like a drunk at a wedding telling a really (really) boring story.

‘Jay Beyries the hatchet’ went the headline….preferably not in the bride’s cleavage, I presume, which David Dinsmore seems to have gone to the effort of cropping out and highlighting with his favourite red crayon. 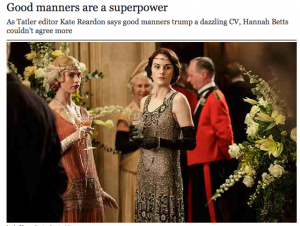 Now don’t get me wrong, saying please and thank you, using a hanky, not gobbing in the street (especially if Michael Gove happens to be on fire nearby) and taking muddy shoes off at someone’s front door are the cornerstones of civilised society. Well, those things and maybe free healthcare, education and benefits for the vulnerable, but that’s just me being a boring whiny lefty right? Apologies, I was being facetious, which isn’t all that polite eh? Anyway, yes, politeness is a good idea but, for some reason, The Telegraph has decided to situate a piece on the necessity of politeness in its Women’s section. I find that a teeny bit sexist…But, oh gosh, I’m at it again, how terribly indelicate of me! I do beg your pardon, I’m probably making a dreadful fuss about nothing aren’t I? Oh lummy, so sorry, just ignore me I’ll just sit politely over here and shut the fuck up.

5) Creative Headline of the Week 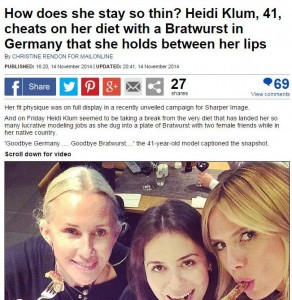 Creative Headline of the Week Award goes to the ever duplicitous Daily Mail, who managed to cram body shame, age judgement, diet failure and lashings of innuendo into a title which should have read ‘woman eats sausage.’ 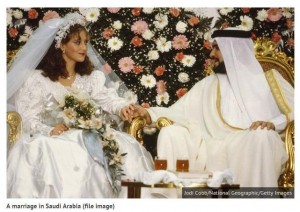 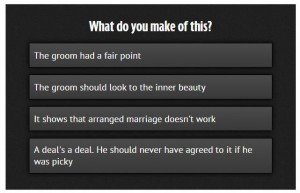 Illustrated with a miscellaneous stock image of a ‘1980s foreign wedding’ The Mirror this week reported on a botched Saudi arranged marriage, which resulted in the groom bolting after lifting the veil of his bride. Helpfully, the article featured a poll, which enabled readers to vote on whether the ‘groom had a fair point’ or whether he was being too picky. Where, we wonder was the poll asking whether she’d had a lucky escape or was sorely missing out on a man of real substance? 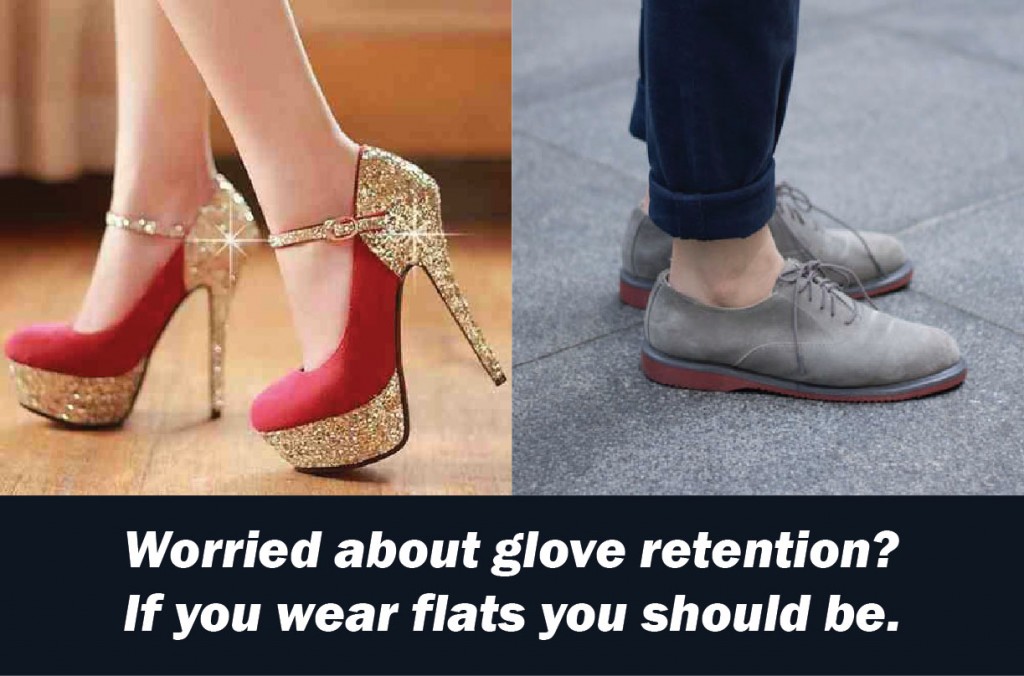 Do you wear high heels, wish you could wear high heels or are you one of those uppity, mannish types that insists on wearing comfortable shoes? Well, The Daily Mail has some startling information for us all. Not only will wearing high heels into your 70s save your life, since teetering on the fuckers for half a century will have improved your balance but, if you are wearing heels, a man is 50% more likely to return a glove to you. Yes, chivalry is not dead, just as long as you’re dressed according to patriarchal standards and you drop a glove. Not sure about the door opening, puddle shielding or bag-carrying stats on this, we’re anxiously awaiting for those results as we write. But rest assured ladies, the men in your life will transform into dashing, helpful and general good sports when you don a pair of stilettos (and drop a glove, don’t forget the 19th century vibe). Presumably, this works in inverse proportion with flats, and the lower the heel the more likely a man is to wee on your lost glove. 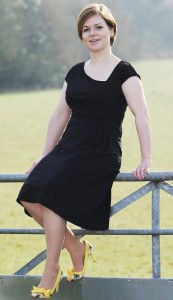 Angela, 36, channeling her John Wayne gait on a gate

More shoe news from the Daily Mail, as woman, 36, enlists the help of Olympic professionals to correct her uncomely ‘John Wayne gait.’ Following intensive stiletto training, encompassing a move described as the ‘dog poo shuffle,’ Angela insisted: ‘beforehand my walk was clunky and not very elegant, but after the sessions it was amazing, my husband noticed the difference straight away.’ In a helpful video link, the Mail instruct us slack-footed dames to push out the chest, pull in the abs and relax the knees, ‘in order to look natural,’ lest we find ourselves resigned to a dreadful, shortened and chivalry-empty life in flat shoes.

A New Low. I don’t say this lightly. The Daily Star have published a series of photos of a woman off X Factor having a piss behind Marks and Spencer’s. One such image is headed: ‘as the 20 year old attempted to make a run for it, a sprinkle of urine splashed down her legs.’ something which isn’t entirely surprising since she was running away from a creepy photographer. Also included in this charming exposé are pictures of the actual pool of urine. Lovely! It’s heartening to know that the gutter press are now actually policing the gutters.