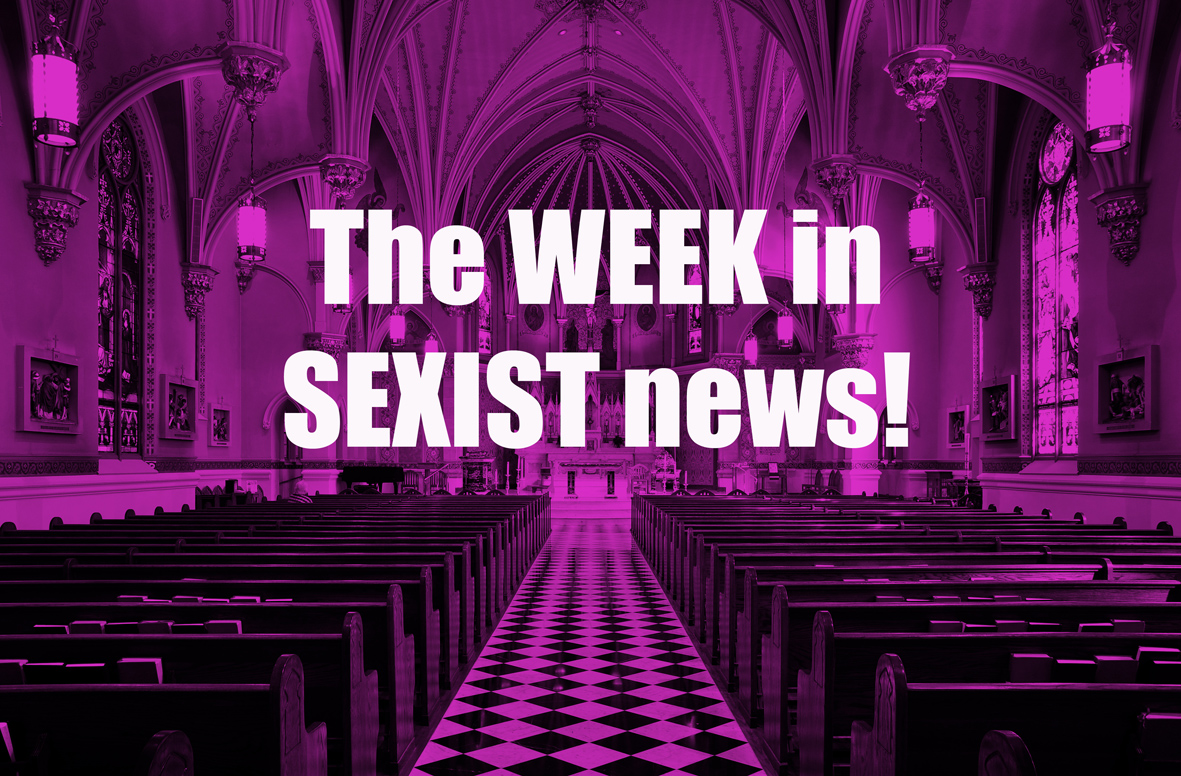 Ah, the week before Christmas. As Flora spends her mornings (in Auntie June’s words) ‘marying about with tinsel’ and Joan Fun drinks her way through the school nativity, Iris effs and jeffs the hours away, wishing that Slade, the Debenhams gift department and nobheads in snowmen jumpers would just sod off. Yes, ’tis the season of goodwill to all men and, in Medialand, really effing awful will to most women. Without further faff, we festively present this week’s sexist news: 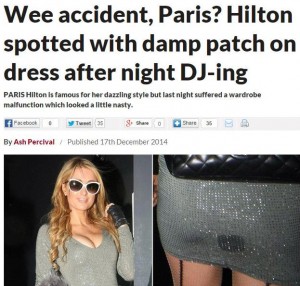 The Daily Star’s ‘upskirt’ USP is now a thing of the past. Oh yes, these days, Richard Desmond’s wank comic has a different obsession; specifically, wanton women pissing themselves when out on the lash. This week’s VI-Pee is Paris Hilton, socialite and creator of numerous Quid Land colognes, with names like ‘Fairy Dust’ and ‘Kitten Fluff.’ Paris was pictured leaving her DJing gig with a wet patch on her arse, which the Star insisted was wazz – I think they want us to imagine that the flood gates opened in the bog queue, as a horrified P.A. squealed ‘no, not here Paris! Oh – it’s too late!’ Unlikely, I say. Have you seen the location of said stain? Does the Daily Star know that women don’t piss out of their arse? Also, I battled with a similar stain last Saturday, after sitting in a bowl of congealed Weetabix; these things HAPPEN Daily Star. #TeamParis 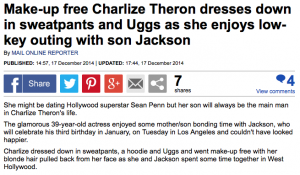 Oh, Daily Mail, how I love thee…. Since when was taking your toddler outside categorised as a low-key event? Labelling the actress ‘make-up free Charlize,’ as if she was in some kind of cosmetics rehab programme, those dogged interns at the Mail managed to muster a whole 298 WORDS on something that could have been summed up nicely in one sentence: ‘famous woman leaves house with child.’ I have to admit, it did leave me wondering what the appropriate attire for a ‘mid-key’ toddler-centric outing – such as an afternoon in a soft-play area -would be; a crimpeline pant-suit perhaps? But then I remembered polyester and slides don’t mix. I learnt that one the hard way.

8) How to have sex with your mum’s friend Cath

Triggering anxious memories of trying to corner an escaped guinea pig with an upturned laundry basket, The Sun’s article ‘How to Catch a Cougar’ gives invaluable tips to help blokes get off with (GASP!) older women. Presuming that ‘older’ women are pathetic bundles of nerves who have no idea where their vaginas are, the gist of The Sun’s advice is: don’t make jokes about her age or presume she’s into gardening. The top tip, however, appears beneath a massive picture of Monica Bellucci in her pants: ‘make her feel like a woman, not a sex object.’ The Sun: portraying women as WOMEN, not sex objects, since 1964.

Single ladies! The Daily Star knows what you all want: chocolate, a urine-soaked night out, a boob job and a wedding! Yes, for all of you pathetic unlovable, desperate harridans there is hope…even if no one will marry you, you can fuck off to Japan, pay to try on a white dress and be photographed laughing at peonies and trees! For the tiny sum of thousands of pounds, complete strangers will patronise you all day, until you feel like an actual bride – they can even hire you a groom! There is, however, no mention of hiring drunk relatives to dance, argue and vomit late into the night – what kind of fake wedding is this? There’s no buffet! No buffet!!!

The indomitable FEMAIL was at it’s best this week, with the irreverent Jane Gordon listing the many ways in which she needs a man, which, of course, extends to ALL women. In an article which made me realise I have been dressing myself incorrectly all these years, we were informed that that – with no man in her life – Jane will never be able to have a 6ft Christmas tree or listen to backhanded complements ever again. It was strategically accompanied by an obligatory miserable photo of Jane, and some really useful advice on how not to get killed by your (less than 6ft) Christmas tree this year, a clue: death by tree is more likely to happen to you if you are a bitter old spinster. For bonus measure, we are warned that she used to be one of those misguided feminist types too… ‘Jane once believed that a woman needs a man like a fish needs a bicycle’ but she has, of late, clocked up ‘plenty of reasons why life is better with a man in the house.’ Now just look how miserable she is, and let that be a lesson to you – find a man QUICK or you’ll be dead come New Year.

And the award for the most tedious article of the week goes to The Sun, for the insipidly titled ‘Ice legs, ladies’. By the time I reached the end of the soulless slog that was this shit-pile, I’d forgotten what day it was and had to pour myself a Campari and soda. The Sun, looking for increasingly creative ways to legitimately feature pictures of Cara Delevigne, and to subtly rate women’s bodies, seem to think they’ve come up with a concept that does both; ‘thanks to celebs, such as models Cara Delevingne and Suki Waterhouse, many of us are baring our legs through winter for the sake of style.’ I’m sorry, The Sun, but I think we can all agree that the North East is the original home of the all-weather bare leg, no matter what it says in Vogue. The article continues, like a picture-book for man children, featuring a bevy of naked-legged British clubbers or ‘girls who dare to bare,’ allocating each of them an ‘exposure rating,’ which involves… oh dear I seem to have fallen asleep.

In another stunning article about tits, the Daily Mail managed to create a Bermuda Triangle of body shaming. We are reliably informed that former model (that bit is important) Hannah Sadowska, has been under the surgeon’s knife twice, taking her from a ‘Small B cup’ (so, just a B cup then Daily Mail?) to somewhere north of an F cup and back again, all in the name of achieving the ‘right look.’ The right look for what, I hear you ask? The transformation from model to law enforcement of course! We all know that aside from ‘model’ there are only two other career possibilities for big-breasted women: wet-nurse or lollipop lady, but not strictly in that order. As well as not having the ‘right look,’ Hannah reasoned ‘my giant breasts would put me and my colleagues at risk,’ that’s right… actual risk. Dear readers, I drove past a total of six coppers this morning, begrudgingly directing traffic after a bus crash on the one-way system, and I’m not exaggerating when I tell you that at least three of them were hiding massive ale-guts under their high-vis but, sure, it’s breasts that come in cup-size ‘DANGEROUS.’ She concluded, ‘I will hopefully be accepted to the job, and now I also have the look to go with it.’ Incidentally she has also become a brunette.

Not only has the festive season been ransacked by arrival of the ‘Christmas Diet,’ us gluttonous dames are now required to wear special Christmas pants to avoid the dreaded ‘food baby’ look.  According to The Express ‘The BLD – otherwise known as Breakfast, Lunch and Dinner pants – are Asda’s solution to looking your best during the period of excess. A more suitable name might be ‘Photoshop’ if the above picture is anything to go by. But, according to the designers, ‘wearers can retain the contoured body look, but still remain comfortable all day long.’ That is, as comfortable as you can be with a belly full of sprouts in a Victorian-inspired contraption, designed to crush you into feminine submission. God bless us, one and all.

The amazing new way to lose weight, according to respected science journal The Daily Mail, is to breathe a lot. You see, air is really naturally low in fat and, unless you’re at a Christmas market, there’s virtually no sugar in it. Thing is though, I’ve been breathing pretty much nonstop for 34 years, but I’ve still got fat bits – am I doing it wrong?

Well, that’s is for another week; I’m off to Darlington train station to spend seven pounds on a joke of a sandwich. I could make my own in advance, but I just never do, readers. BLT woes aside, we wish you a really bloody lovely Christmas, filled with Croft Original, jigsaws and mirth. See you on Boxing Day, when we will unveil The Year in Sexist News. Cheers!