Good morning citizens of the internet. We hope you’re having a nice Friday (or any other day if you’re reading this some other time). We’ve had a largely calm week, well, sort of. Iris is ovulating and so has mostly been crying, but Flora has had some delightful walks in the woods and cups of tea. So that’s nice. Obviously, despite the efforts of feminists everywhere, there’s still a smattering of sexism about, and we found some in the news…

This one really did tickle me. The Sun are bored by pictures of women in bikinis. Well, they’re bored of women who take and post THEIR OWN photos of themselves in bikinis. This is beyond parody, especially since they took great care to reproduce numerous photos of these women IN their bikinis. When I’m bored by something I tend to avoid it, I don’t enthusiastically explain said thing to everyone who’ll listen, like an eight year old who’s just discovered the RSPB* or military issue watches for instance. Perhaps they doth protest too much. What’s nice is that, instead of saying ‘gosh, we do like poring lecherously over pictures of young, firm women, let’s celebrate their bodies which we fetishise like sweaty adolescents,’ they decided to take the piss out of women who are pleased to have conformed to a ruthless beauty ideal, which leaves virtually all people coveting an ideal perpetuated by… you guessed it… I’ve just eyerolled so hard my eyeballs have jammed backwards in my sockets, good job I can touch type.

*Flora would like to add that she has recently joined the RSPB, and is happy to discuss kingfisher burrowing behaviour with absolutely anyone.

9) Dear Femail, a toddler is not a fashion icon

‘Today,’ said the two year old, ‘I shall wear Yeezus merchandise in support of my rapper father. This evening, I will do my utmost to match my Givenchy to my mother’s. But first, I will rub this Weetabix into my hair, repeatedly throw a wiffle ball at a wheelie bin and shit myself, twice.’

8)  Mayday Mayday Man Down Man Down!!

Fast becoming our ‘Idiot Sexist’ mascot, Martin Daubney once again graces the pages of The Telegraph. Poor Martin, ex-Loaded Editor (8 years), he’s ever so confused. He’s on the board of The Southbank Centre’s ‘Being a Man’ festival, an event that explores masculinity and hopes to critique and expand the meaning. But in this daring (not daring) piece on men being MANLY (TM) in relationships, he talks as though there’s only one way to be A MAN, and it’s about WORKING, not nappy changing  – there’s probably some saying ‘corrrrr don’t get many of them to the pound” and burping for good measure. Looking after a baby emasculated poor Martin. And perhaps he’s making up for that now by being a binary-obsessed douche-monkey.

I mean, do boys check-in every ten minutes and ask themselves ‘how Manly am I Right Now?’ And if not feeling particularly manly, what does one do? Have a wank? Stand in a heroic pose? Crush something in a vice down the shed? If fellas do feel compelled to conform to bullshit masculinity throughout the day, that’s a real shame. As much of a shame as women constantly feeling the pressure to be sexy, thin, large breasted, thigh-gapped, smart-but-not-too-smart lest they frighten the horses, up for it (but not a slag), perfect mothers (but not frumpy) etc etc. See Martin, we’re ALL in a bind. Rather than reinforcing it, you absolute arse-trumpet, maybe suggest that couples find ways to live that suit them? Personally, I will be in hobnail boots barking orders by day to a man in a skirt and, come nightfall, well… I’ll be drooling in my sleep, dreaming of a Bloody and Terrifying MATRIARCHY. Man that up yer hole Martin.

I’m not sure I’ve ever been more amused – and simultaneously terrified – by a series of pictures, and I’ve seen the inside of my own uterus. Someone at The Express with a pair of safety scissors, a glue stick and too much time on their hands has created a series of sinister montages so we can KNOW, categorically, what Princess Charlotte will look like up until her 21st birthday. We’re not sure what will happen at this juncture; it seems prophetic…maybe she’ll prick her finger on a spinning wheel, eat a poisoned apple or perhaps be forced to go and live with a large hairy man-beast. Or maybe the work experience lad who did this, got bored and went and had a fag. So some people may NEVER KNOW what Charlotte will look like at 35. Oh HANG ON, I get it, 21 is the cut-off point for female hotness and thus relevance. Ah the mystery is solved. As you were. 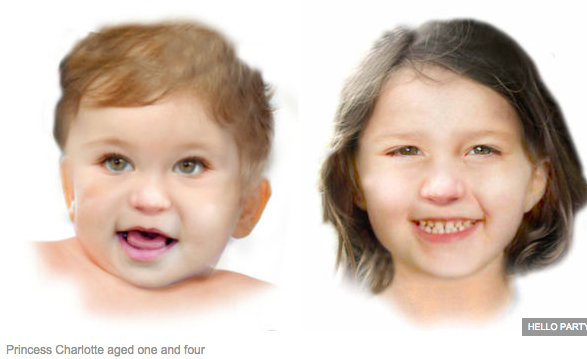 Here’s a nice Daily Mail article about ‘the former girlfriend of Justin Bieber’ putting on ‘a leggy display’ at the Summer of Sony Pictures Entertainment Gala, held at the Ritz Carlton Hotel. Selena Gomez, 22, was promoting a film with her with co-stars Adam Sandler and Kevin James (both about 65), who turned up in the sort of outfits my brothers wear when they have to go in the loft to find the Christmas tree.

A big, big part of me wishes that Selena had turned up in tracksuit bottoms and a shirt with egg stains on it, but an ever bigger part of me wishes that the blokes had, y’know, actually had a wash beforehand. You see, while I’m all for binning fascist beauty standards, I do rather like it when movie stars look like movie stars. You never saw Clark Gable slobbing about looking like he’d just dug a pond. And Cary Grant never showed up for swanky dinners looking like a depressed bin man, did he? He wore TROUSERS goddamit.

The Express can only be congratulated on trying to incite a catfight between two women, one of whom is very much dead, the other is 89. So The Queen is a bit of a snob? (How is this news, she’s the most entitled woman in the country). And she wasn’t keen on Thatcher. 1-0 to Queenie in my ‘Thatcher was Evil’ activity book. What is most heart-warming about this report is that, apparently, Liz and Mags had disagreements that were ‘very personal, class driven and distinctly female.’

Have you ever had a distinctly female disagreement? Was it pink in colour? Shrill and bitchy? Did you pull hair and grapple around on the floor in high heels? Thought so. This is surely what is meant here right?

Oh shove it up your arse Daily Mail, and fuck off while you’re doing it.

3) Inane Tripe of the Week Award 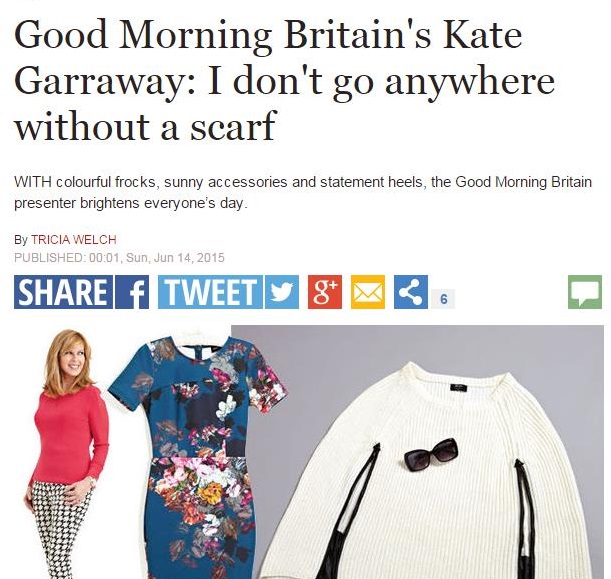 As oft reported in the Sexist News, the Express frequently prints stories so bland they evaporate into a light mist upon reading. This piece, about Kate Garraway carrying a scarf, ranks third in my soon-to-be-laminated list of patronising female-oriented Express shit, alongside ‘Twiggy: my hair has always been important to me’ (currently ranked 1st) and an article about the Duchess of Cornwall liking honey (2nd – may get more interesting towards the end, but I’ve always blacked out two thirds in).

I look forward to next week’s story about Bill Turnbull noticing socks.

Isn’t it nice of the Daily Star to be so interested in lesbians? For such a sexist rag, they really do their bit in promoting same sex partnership. Take, for example, this article about somebody who was on telly once, probably, who used to be married to ‘one of the manliest men in Britain’ (any ideas?) Well, she’s had a fling with another lass, and she’s helpfully shared her lesbian sex secrets with the Star.

However, I must dispute that saying ‘I kissed and touched her all over’ constitutes sharing lesbian sex secrets. I mean, I sort of already guessed that lesbian sex might possibly involve women kissing and touching.

What a crap secret. I feel mislead. I’m going to send a letter of complaint to the sexy lesbian sex secrets ombudsman.

So, some pornographer or other in the US started the #holdacokewithyourboobs ‘challenge’ hashtag thingamy. People thought it was for raising awareness and money for cancer, like the Ice Bucket Challenge. The people who started it didn’t discourage the idea, and lots of women gamely and boobily took part…

Double mastectomy patient Aimee Fletcher posted the pic below as a protest, and questioned why anyone would think that sharing endless pictures of perky, healthy breasts would be a kind thing for those who have lost theirs. In The Express she was quoted as saying:

“Breast cancer is not fun and sexy. The treatment is gruelling…It’s not glamorous and why people decide to take photos of the part of the body that breast cancer destroys is beyond me.”

Now does this remind anyone of anything? Oh yes! The Sun‘s ‘Check ’em Tuesday,’ marrying healthy, bouncy tit obsession with cancer. Well The Sun did report on this piece, though they left out the above quote, they did say ‘…it was a cynical stunt.’ Hmmmmm. But they also published a lovely gallery of photos from the Hold a Coke with Your Boobs challenge. Oh how we laughed. But OF COURSE, the partnership with Coppafeel was entirely wholesome and charitable. In no way did it exploit an illness to legitimise Page 3 and the GOD GIVEN RIGHT to have one off the wrist over the nipples of a perky woman under 28. Nope.

So, Dave Dinsmore, I suggest you look at this photograph, the sentiment of which we warmly endorse. Maybe print it out and stick it in your Forever Friends journal, or on your wall and return to it often. Though it was meant for someone else you can know deep down in your heart, under your love of rusks and bacardi breezers, under your dark pact with old Rupes, under piles and piles and piles of tits, that you very much deserve being told, in no uncertain terms, to swivel.

We’re now off to look into designing our own slogan tights, Iris wants a pair with Fuck Off written down the back seam and Flora wants ones with Fox Mulder and Jeremy Paxman all over them. We’re basically all about FASHION. Have a spiffo week all and sundry, we love you. Iris and Flora xx