Morning all, as we’ve watched another week grind past (and not in a bawdy way) a fair proportion of the journos up and down our land have been conjuring clouds of malodorous word guff. It’s wafted about this green and pleasant land just being generally pongy, oh and vilely sexist too! Hurrah. What would we do otherwise?

Written by Iris Clot and Janice Lathe, as Flora Cramp has drifted into the land of the unwell.

Nadia Mendoza is a ‘youth self-esteem expert’ and writes for the Daily Star. We would guess that our Nadia has some fairly outrageous levels of vocational cognitive dissonance going on, but that isn’t the story.

Instead, she’s reporting on Dawn Porter having leaky breasts whilst breastfeeding with a kind of fascinated horror, as if it’s a) massively weird and b) something no one has ever come across before. Perhaps she’s providing a feminist service by gradually letting the paper’s seven readers know that breasts can do things other than provide a canvas for spaff and a focus for doomed self-loathing?

Well, it’s Mental Health Awareness Week and The Sun has ruled out any need for psychiatrists. That’s because there’s a foolproof way to tell if a person is sane: do you fancy Rosie Huntington-Whiteley? Answer ‘yes’ and congratulations. You are of sound mind. You have all your faculties about you and are generally mentally acceptable to respectable society. Answer ‘no’ and… well, you’re a galloping, foaming, unravelling loon with crap eyes and a slack, misfiring libido. Or you’re gay. Or not gay enough. Or… oh sod it. I like her jacket.

8) The translucent brain of Dacre’s minions

Human rights are under attack, homophobes are in government and the wankers not only have the keys to the asylum but have privatized it, are charging themselves rent and then claiming back on expenses. But the Mail knows that the real story is translucent crisps.

Above an article that provides more pictures of potatoes than you ever knew you needed (but where’s the picture of one being worked purposefully up Paul Dacre’s urethra to the tune of The Ring Cycle?), it prints some cookery instructions. Which you’d only have time to follow if you were, perhaps, the kind of ludicrous arsewit who thinks this – along with all the other recipes – belongs in a section called ‘Femail.’ Give us strength.

7) Ekaterina and the face that launched a thousand, hostile wanks

Do you angrily read The Telegraph? Do you need an excuse for a really angry wank? Good news. Here’s a story about Ekateria Parfenova, who we’d scarcely know from any other woman the papers like to use to try and advance their foul agenda, who is in a divorce battle.

What, we hear you say, is that the story? Well, yes. It is. The Telegraph wants men to read this turd of a story, contemplate its artless jabber about how she wants money in the divorce battle and wonder whether the woman they’d previously thought of as their wife wants to take the Jaguar, steal their shed and blow up their houses.

We don’t care. We literally don’t care. And to John Bingham, the protuberant boil on the vulva of humanity who watched as this dross bloomed into life, we invite you to take Ekateria, marry her, and watch as she deservedly distributes your cash over the Home Counties.

6) Daily Mail is the pits

In shocking news, a woman had hair this week. What’s that? It’s the Daily Mail? Ah. All is clear. It’s where the hair was that seems to have upset them. You see, the hair was in her armpit, and everyone knows that no woman worthy of the name would leave the house without having waxed, exfoliated and then scourged herself. Twice.

There are around fifty pictures, so Mail readers can really build up a head of steam and, perhaps, be hospitalised with some form of stroke, including one where THE HAIR is blown up so large that you feel as though you’ve been shoved, head first, into a cornfield.

If you want to finally have your respect for humanity surgically removed, placed on a table and struck forcibly with a mallet until it looks like a piece of bacon, read the comments. We have and, frankly, it makes us want to grow under arm hair so long, we could wear it as a dress. 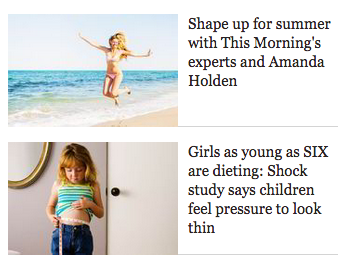 Good Morning Hugh Whittow, Editor of  The Express, how are we today? You look a bit spaced out. Yes, maybe have a sit down. Tying your own shoelaces this morning must have been so, so trying. We understand. No, don’t do that. Oh. Well, now you have, do wash your hands. Yes, the pictures of Suzanna Reid do appear to have excited you. But remember to use your ‘indoor voice.’ Ready?

Now. Have a look at the two images above and read the writing next to them. They’re from your paper. Now, why the fuck do you think girls as young as six are dieting you massive arse-trumpet? Go away, have a think, and try not to do it again.

I could write a long, ranty piece about this little slice of journalistic fungal crust from The Sun, interspersed with observational witticisms. Or I could just share my first, antic, knee-jerk reaction to the prodigious pile of rampant, arse-drooling idiocy, which was: has this man got a cock of ludicrous and eye-watering proportions?

There’s something about The Guardian that sits ill with this writer. Perhaps it’s the lazy metropolitan smuggery, the fact that it tends to talk about people rather than, you know, giving them a voice or that its Saturday supplement regularly tries to flog you garden benches worth the GDP of Burundi.* And now this. 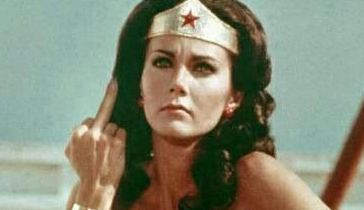 And for the end of this long apologia for wanking is the writer’s idea that Wonder Woman says that sex is better than violence. Well, in that case, why doesn’t she just toss the villains off until they’re all sleepy. Or maybe, just maybe, the author also wrote ‘Wonder Woman: Bondage and Feminism’ and has a particular agenda to push. We leave it to you, gentle reader, to decide.

*Disclaimer. Not the view of all Tights writers, Iris is saving up one of those benches, and will potentially be able to afford it in 2045.

2. The dark, toxic cocktail of equality and pinot noir

Women drinking wine. Welcome to the ‘dark-side of equality’. You know how we don’t have equality yet? Well it already has a dark side and it can be seen in the BOOZY SHAME of HIGH FLYING WOMEN.

The Sun reports that, according to some study or other, 20% of university educated women drink more than the recommended one large glass of wine per day. For shame. I love the idea that having a degree makes one a high flyer. In fact I may laugh myself into a light spasm over that, shortly before returning to work for a man who thinks ‘darlin’ is a chat-up line.

Reading this is making me want a gin, but then I always want a gin, because I inhabit the dark side of equality. It’s a dark and scary place where only a foetid pair of dungarees hang in the wardrobe in an un-hoovered hovel, its walls bedecked in patterns drawn with menstrual blood, lined with books on psychoanalysis and gender theory. Furniture is scattered liberally with cat hair and there isn’t a piece of matching crockery in sight. There’s no place like home. Bottoms up, ladies.

Hello, women. The Mirror wants you to know that it takes you seriously. So seriously, in fact, that domestic violence can be airily waved away as ‘a bit of a tiff,’ ‘banter’ or as signs that tabloid writer called Luke Traynor appears to be a patronizing crevice whose moral compass is pointing to ‘wanker’.

Luke has found a private tragedy in which a husband faces domestic violence. He’s under police protection, guffaws Luke, is a bit ‘henpecked,’ he jokes, wiping imaginary tears from mirthless eyes, and was once hospitalized, he laughs, ferociously soiling himself through bulging undercrackers with the sheer force of his vast amusement.

Whatever positive qualities Luke has as a human being, we wonder if, say, being wired up by the nipples to the National Grid would seem in any way amusing. Get in touch, Luke. We’re eager to try.

So, it’s official this all stinks. With that in mind we’re off to perform some ablutions with new caustic radox shower gel; not together mind, that’d be beyond the pale. Although we could then make a great Sun-esque meta pun about satire, feminists and a s-pun-ge. #sorry