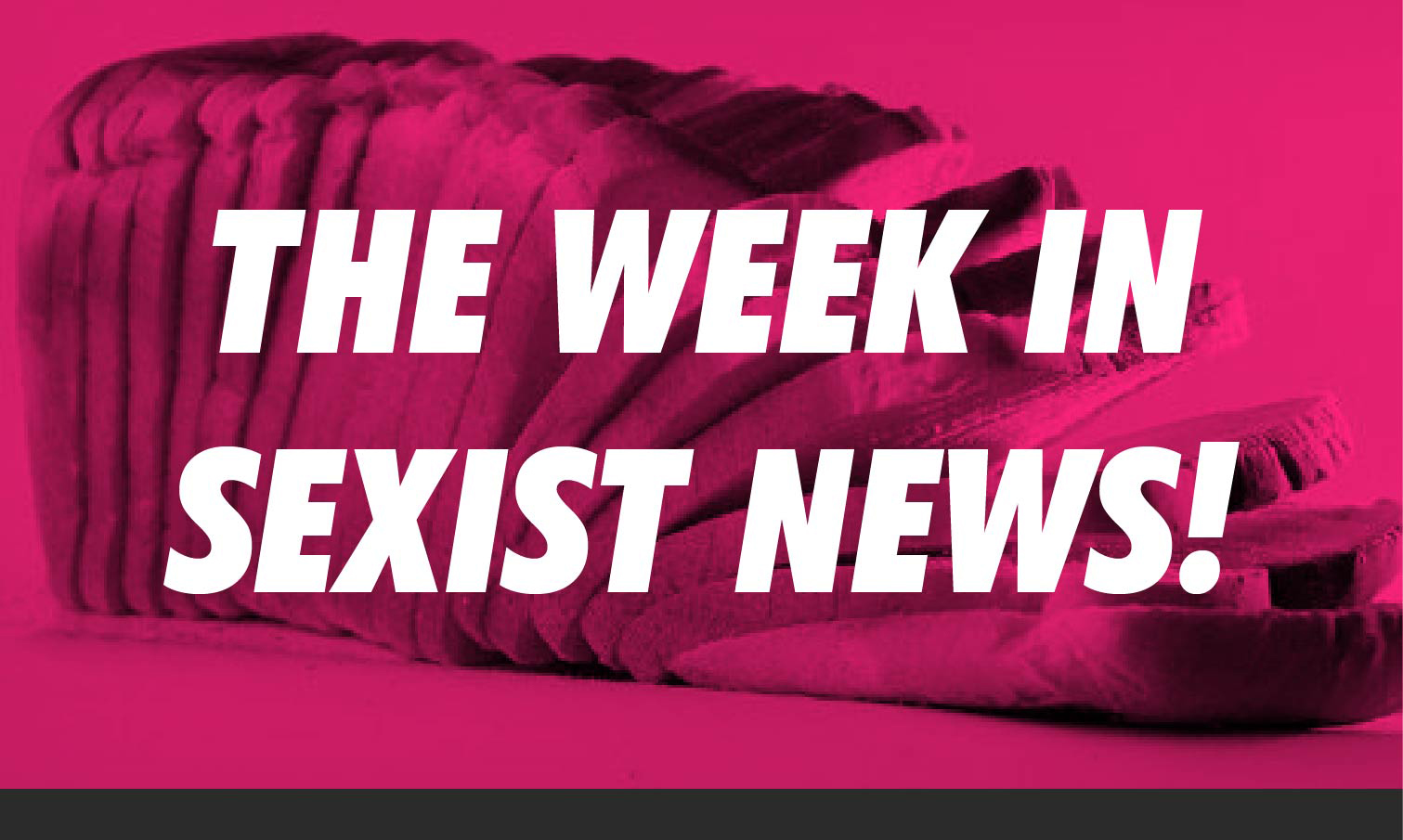 Oh Friday, what a day. A day to eat Crunchies, clock watch and marvel at the dark-hearted depths our spiritually bankrupt journos will plumb to debase women in the pursuit of ‘news.’ It really is quite breathtaking (in a walking past a septic tank kinda way). Enjoy!

By Flora Cramp, Iris Clot and  Joan Fun (with consultation from Maud Flannel)

10) Stepford Wives for the conversationally challenged

In an article gleefully titled ‘sex dolls are taking over the world,’ which made me want to cancel Christmas, the Daily Star explores the ever-expanding market for what it weirdly labels ‘blow-up ladies.’ Managing to celebrate the most disturbing picture of humankind to emerge since Kim Kardashian’s arse, and with the enthusiasm of a trained seal, they insisted ‘the speed this industry has developed is truly exceptional.’ Let’s face it, the Star are probably jizzing into their socks over next years’ budget, after being given the green light to use inflatables instead of actual women. 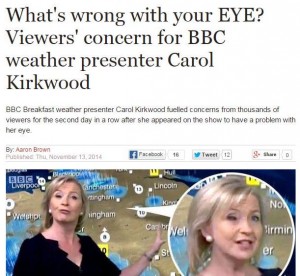 For the love of God, what’s wrong with Carol’s EYE? The Daily Express is so worried. How can she predict the weather when her face has gone weird? Perhaps Carol’s EYE is to blame for the month of wild storms set to ravage Britain? For fuck’s sake, get her off telly quick before a ‘Michael Fish’ situation develops. 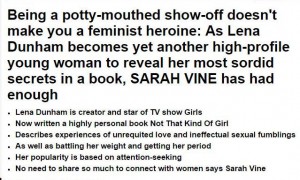 Sarah Vine has had ENOUGH! She’s sick to death of Lena Dunham effing and jeffing and going on about her minge. In the Daily Mail, vicious troll-bag Vine wrote: ‘put Lena next to a real feminist – Malala Yousafzai, the 17-year-old from Pakistan who took a bullet in the head to defend her right to an education – and she is revealed for what she is: a well-connected kid who got herself a TV show and a vastly lucrative book deal.’

IMPORTANT: Readers, have you had your feminism measured by being put next to Malala? I didn’t even know I had to line up next to Malala? Did I miss a memo? Does Malala even have time for this? 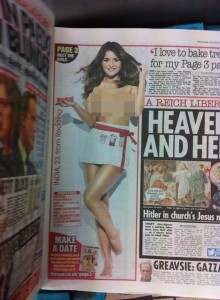 We wonder which cancer will be next to receive the Sun’s special treatment, prostate perhaps? 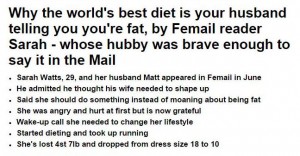 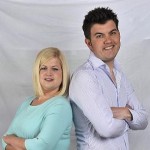 All hail Sarah’s ‘brave’ husband Matt, who was gallant enough to publicly fat shame her in the Daily Mail. ‘There is nothing like the fear of realising the man you love sees you as an unattractive, whining self-pitying lump to shake you into action,’ confessed Sarah, ‘but for his harsh words, I’d have been bursting out of size eighteen clothes right now, and poor Matt would’ve been running for the door.’

Not to be cynical or anything, but I’ll give it three weeks before the dark cloud of resentment encourages Sarah to heroically write in to Femail: ‘why won’t my husband lose that stupid fucking expression? I literally can’t look at that smug, grimacing mug without coughing up a hairball. He’s got a face like a welder’s bench. I’m off for a run now, BYE!’ 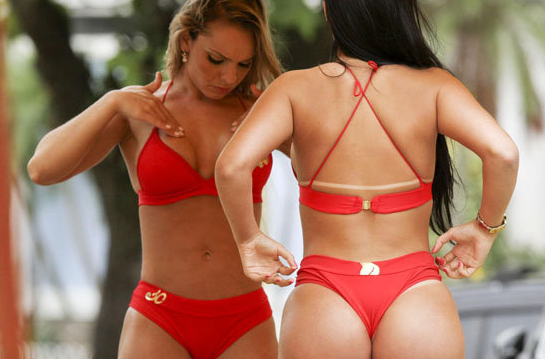 Why the Daily Star isn’t printed on wipe-clean material, I’ll never know. It could be like a bath book for man-children. This (literal) pile of arse is a case in point. There is a contest in Brazil called ‘Miss Bum Bum,’ Yes, you read that correctly – it is not a typo or a copy-paste error – it’s so stupid they named it twice. Or maybe the real meaning is lost in translation… But, suffice to say, there are numerous pictures of bottoms and speculation as to who will win the ‘£13,000 prize and the chance of worldwide [arse] fame.’ Is there a modelling contract to lead one to such fame? The ‘face’ of Anusol Suppositories perhaps?

Ah, fashion. Lovely woman-friendly fashion. Isn’t fashion nice, always coming in a range of realistic sizes and offered up in magazines in an accessible way. Oh, sorry, I was day-dreaming. So, once again, fashion is showing us that the universe hates women, one voluminous trouser leg at a time. Yes, apparently, some sadist has decided to regurgitate culottes into a shop near you, like a soggy lump of sugar-free rusk. Now, obviously, we all have to wear clothes but, by and large, we get to choose what we wear (within reason). Unless you’re Anthea Turner, who has been sent to fashion purgatory on a mandatory mission by the Daily Mail to road test something we all know is shit. Six times. Including a pair of faux leather abominations. The description ‘skirts-cum-shorts’ is enough to put off even the most hardcore madcap sartorialist. They were shit in the 70s, they were shit in the 90s when I fell victim to their witchcraft, and they’re shit now. This is not news.

3) Women! Stop eating bread, or you may ba-guette a beard… 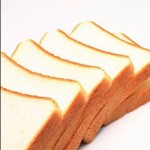 As the Daily Mail’s sandwich crisis deepens, it is shockingly revealed that coming within an inch of a loaf, baguette or crumpet will cause unmitigated beard growth in menopausal women. Moreover, to make matters worse, just one slice of toast can produce – take a deep breath – ‘lackluster eyebrows.’ Next time you’re enjoying a lunch break Ploughman’s, be warned: your sandwich was made by an immigrant AND by morning you’ll look like Brian Blessed.

2) It’s a jungle out there girls

The Daily Star isn’t really a hate-filled, tit-fixated tat-rag, it’s actually benevolently providing aspiring starlets with a warning. Thank god award-winning Self-Esteem Advocate Nadia Mendoza is here to show us what happens to famous women who make sex-tapes when at High School! And no mercy or thigh-rubbing is spared to teach that lesson – she’s selflessly gobbed pictures of an 18 year old Kendra Wilkinson into the world, like a school bully might from a high banister. But it’s ok, she reports on how heartbroken Kendra was by the leak of the sex-tape. How tender-hearted; we’re sure all the guys dribbling effluvium all over this story and feverishly googling the tape will really bear that in mind. Bravo.

1) A Joke about Uranus would be fitting here: 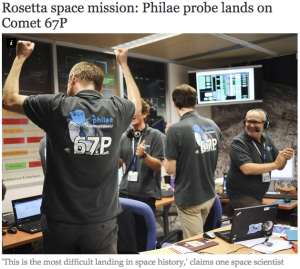 Human beings land a probe on a moving comet. Meanwhile, on Earth, everyone with wifi is gawping at an arse covered in chip fat. Maybe the comet should pay us a visit.

We do hope you’re not too traumatised by this week’s utter dungheap, which supposedly qualifies as public interest. We’re as baffled as you dear readers. Have a jolly day. We’re off for some breakfast Bristol Cream.