Dear readers, it is, once again, Friday. We have the usual countdown of bilge and bobbins, cataloguing cherry-picked instances of Fleet Street’s finest rancid guffery for your laptop-punching rage and beverage inhaling amusement. This week, joining Iris, we have guest blogger Janice Lathe since our Flora is a broad abroad. She’s likely drinking Pina Coladas and rolling her eyes at those novelty pens you get in resort gift shops where the lady’s clothes fall off. Anyhoo lovely people, behold THE HORROR:

Aw thanks, The Daily Star, we ‘fuming’ equality-lovers are really touched at how seriously you took a story on the condoning of sexual harassment and objectification in advertising. In fact, we’re particularly liking the inverted commas around ‘sexism’. No really, considering the general climate of victim blaming, slut shaming, ritual humiliation and threats women face when standing up to the drooling idiocy of our woman-averse media, money-humping commerce and actual criminal abusers, when a newspaper really has our back it’s refreshing. I mean who wouldn’t feel better when a newspaper does the equivalent of shrugging like a squitty teenager in disgusting joggers, who’s doing his utmost best not to shout ‘I HATE YOU’.

Fresh from the paper which subtly implies anyone born without a penis needs to argue for their existence in a high, needy voice and never leave the house without full make up and an ‘adorable tot,’ comes this screed of arrant excreta which takes up a large Blunderbuss of Hate and fires it from its grasping, nasty fingers in the uncertain direction of the sadly cockless.

Anyone, it argues, madly, not born blonde should be blonde, ideally within the next hour, or face the irrelevance of advancing childless years. Above a picture of the writer it reveals, in that acme of importance in the mock-Tudor estate of the mind known as Mailworld, that she ‘bagged herself a man’.

What she has done with him – leave him in said bag in the parlour perhaps – is not explained in full, but the important thing here is that she has brittle self esteem, you’re made to hate yourself and some odious puddle of human ooze from the Home Counties gets to spank one out over his newspaper.

The heartbreak diet. Now this is genius. Fuck me, I never realised there’d be an upside to abject misery and loneliness. And yes, people, leaving your lover may indeed afford one the opportunity to slide oneself into a smaller trouser or blouse, which is fantastic. Suddenly, you don’t have to bother with scales, a complicated points system or even to go to meetings (seeing other humans might actually lessen the burden of sadness and that isn’t part of the programme). So if you have a partner (if not, then this is awkward) and feel like you could lose a few pounds, simply drive them away. Your appetite will disappear and… hey PRESTO. You have thinner thighs in a jiffy. Just imagine all the water-weight one can lose by weeping (attractively of course – ugly, mucus-dribbling criers need not apply – think LADYLIKE). Why had no one thought about this before? We’ll all be thin enough to get a hot, bondage-obsessed, millionaire fella in no time – what would we do without The Express?!

7) Got your gaffer tape handy?

‘Mummy, why is the orange man putting a blindfold on the lady?’ ‘Because she’s a journalist and actually writing stories that mean anything and give an insight into the human condition are too much of a faff.’ Which is broadly how any conversation between a child and anyone with a brain might run on seeing this absolute toss.

6) Corr what a ripper

Jan and Poldark, having a ripping time.

When she’s not trying to link gayness and death with the scrabbling hands and desperate eyes of someone who relies on clicks to get paid, or taking a mistimed kick at Katherine Jenkins who perhaps thought Jan Moir was some kind of underarm deodorant, the Mail columnist wants you to know she wants bodices ripped.

Not just her bodice, you understand, but everyone’s bodice. The issue of consent to bodice-ripping doesn’t feature in Jan’s world, as it’s assumed that Aiden Turner of Poldark can turn up and rip your bodice without you saying ‘fuck off, Aiden Turner, I’m eating a Flake,’ but there we are. A truly foul piece that loosely gestures towards sexual violence with something that really ought to be treated with penicillin. Oh, and perhaps police stations near Poldark’s house ought to have (a) an aggressive female barrister and (b) a seamstress within easy reach.

The Express fumbles with its belt, the leather slipping through urgent, yet clumsy fingers as a millimetre of Myleene Klass’s outer left nipple hoves into view on some shit, anonymous London street before spreading its thin, hateful love-gravy over acres of newsprint. Blowing up a photograph from some faecal remnant whose job it is to hang around on the offchance a Z-list celebrity gets out of a taxi without pants on, it also said, confusingly, that she’d dressed her daughter as herself for World Book Day. Readers, we wept. Not really. We had a gin, stuck a Blu Tac cock to Flora’s nephew’s Action Man and then flicked it off. 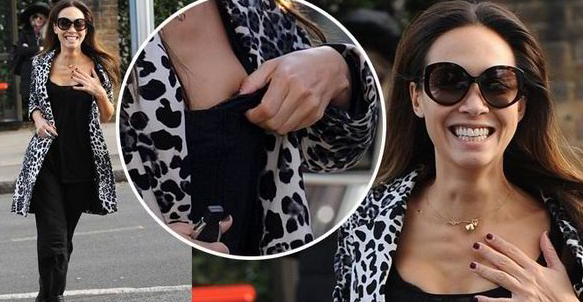 There’s nothing quite like the sight of a subeditor squeezing one out so hard he spaffs a kidney to make this column long for the sweet release of death or contemplate making hunting UKIPpers with dogs an Olympic sport, but that’s what the news that Daniella Westbrook was a possible domestic violence victim (note to Mail not ‘had a black eye’) heralded.

In amongst the pap shots taken by a bush-lurking boil on the sphincter of humanity, the Mail whipped itself to a noisy yet underwhelming climax with the kind of galloping class snobbery only possible if you feel the working class snapping at your heels with phrases like ‘worn out’ and, oh the horror, ‘ending up in social housing,’ and then laughed itself into a nervous and febrile spasm where, for our money, it could soil itself and bang its head.

As our spare laptop on which this smear-test of an article appeared now blazes merrily away, having been doused in fuel from an angrily broken lighter and hurled across the room with a force that caused one of the cats to cautiously leaf through the Yellow Pages looking for an animal shelter, let us ponder on what the writer is saying.

That people should be humanists, as though the greatest calumnies weren’t disproportionately visited on one gender. That most of the inspiring women they knew weren’t feminists, as though some bumwitted subjectivity is a substitute for thought. And that Dorothy L. Sayers closed the debate in 1938 with some Utopian arsewash that wouldn’t stand up to a nanosecond’s scrutiny from someone who thought ‘feminism’ was a fragrance.

There’s a final kick at Harriet Harman and a plea to stop going on about it as though having tits and a cunt was in some way an appalling act of bad taste that stops short of wearing black and blue together, but the overall sense we get is that this is the kind of toss that the Telegraph are putting on its women’s pages, we’d far rather have the vacuous crap that congratulates Theresa May for wearing shoes than this gently throbbing heap of waste.

Hinging this absolute pus-filled carbuncle of an article on the fact that DJ and sparkly-dancing aficionado Zoe Ball is 44 and has never been to the Victoria and Albert museum (who the fuck cares, it’s mainly chintz and stuff we should be ashamed of nicking from other countries), The Telegraph manage to compile a list so turgid, patronising and sexist if I’d had a copy in front of me I’d have eaten and regurgitated it, like a snake eating a large egg, just to express my incredulous and shirty displeasure.

In the 44 Things To Do Before You’re 44 list are things that are definitely not sublime: ‘Found your fitness routine’ or the faintly ridiculous ‘Said ‘yes’ to proper knitwear’. And then are the things that are actually openly ridiculous, such as the ones which suggest the writer is squeamish about sex for the over 40s (which we know is a horrifying thought – so sorry for bringing it up), those which are disdainful of women over 40 wanting to wear whatever the fuck they want and then those finger-wagglingly disapproving of women tricking people into thinking they look good from the front, by having an attractive back-end.

So, think on, women of a certain age; keep the shagging to a minimum and for gawd’s sake only do it with a husband or something, wear things from the drab end of Laura Ashley and, whatever you do, if your face looks like shit, do everyone else a favour and pin a note saying so to your back lest you frighten the horses.

1a) Journos, do you have CTBBCELH? (Copywriting Talent, but a Black, Black Charred Empty Little Heart)

Do you have a GBBF? That’s a Good Body, Bad Face to the uninitiated. Apologies for the initiation there, because quite frankly, what in the absolute love of chuffing fuck is going on here? Our dear, sweet, considerate friends over at the Sun (and by that we mean colony of arse-fungus) do a great line in fat-shaming and general woman-hating, unless of course you’re wholly silent, only wear knickers and press your two forefingers over your nipples whilst making an orgasmically bored face. AND NOW they are suggesting, ladies who exercise, possibly at their behest, that exercising might make your face sag off your skull. Christ on a bendy bus, to quote Malcolm Tucker, where in Shitsville do they go from here?

1b) These boots were made for standing around topless in…

Ah Page 3, delight of delights, pinnacle of woman-loving journalism – because, well… tits. Have they canned it? Does it still limp gamely on? These are the burning questions on every feminist’s mind. They’ve been cautiously wading out into the waters of nipple-free ‘news’ for well over a month, but are they getting tiny, cold dangly bits? In a bid to seem arty, or because woman-hating fashion mags which women read also exploit women’s bodies, the Sun have enlisted three almost nude young women in wellies to re-enact a boring Vogue shoot. During this shoot, they are ‘erotically’ protecting their nips for the gratification of side-boob-loving men who need to visit a newsagent’s in order to see female flesh as they can’t, inexplicably put ‘big tits’ into Google. Thrilling stuff, I’m sure you’ll agree. Someone pass me a valium smoothie.

Well, we hope you enjoy the inevitable bout of ennui after reading that bucket of the festering wank our national press mistakes for news. We’re feeling a bit despondent ourselves, but there’s stuff to do and we can’t just sit around drinking gin and looking at shoes on the internet. Iris has a variety of off-colour errands to run, one involving a specimen jar, and Janice, who is feeling anxious about being close to 44 is seriously considering her perfect work out and finding some REAL knitwear. Toodle pip darlings, until next time.

Oh and if you think that Jezza Clarkson of sexist, racist, classist fame should probably not be feted as a right-wing overlord after punching someone (allegedly) over a sandwich, then this is the link for you: https://you.38degrees.org.uk/petitions/sack-jeremy-clarkson