Aaaaah… we love the smell of sexism in the morning. Which is a good thing, since this week has gifted our green and pleasant land with a veritable pea-souper of stinking, patriarchal fug. Woo-hoo. SRSLY people it’s bleak. Jeffing bleak, as my grandma, who would die before she swore, used to say. Sorry to do this to you, guys and gals, but here is this week’s round up…

This is like Minority Report, but for tits. The Express are actually reporting on something that hasn’t happened yet, or may not. I would like to posit that The Express are exploring what seems set to become an important concept in the mainstream press -‘Schrodinger’s Nip Slip.’ Will her tit fall out or not? We can’t know. In the mind of 14 year old tabloid editors everywhere, her nipple has already leapt out of her swimsuit but, for those of us without a perma-chubby, she’s just wearing a swimming costume. Admittedly it’s not a robust Speedo but, if I had a body like Beyoncé, I might be a bit more daring and ditch the wetsuit for poolside lounging.

In years to come we’ll see that they pioneered something so intellectually sophisticated that mere mortals, especially those of us with tiny, simply lady brains, cannot possibly comprehend. 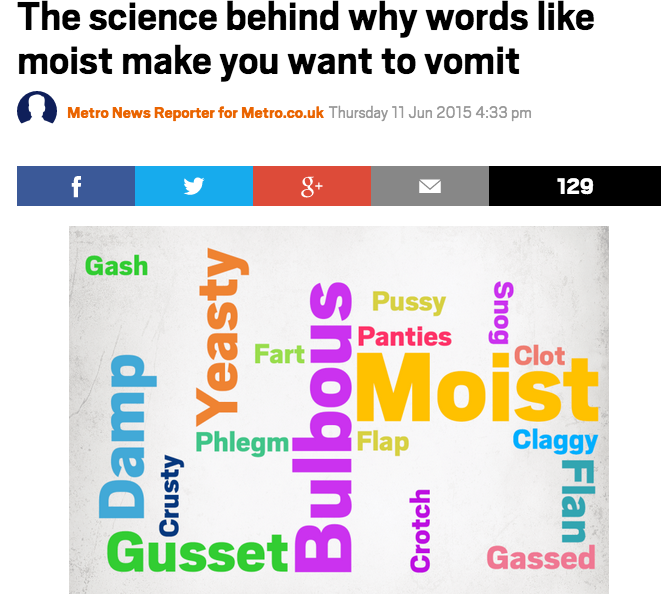 Apparently there is a psychological basis for certain words making us want to gag. It’s because they’re linked to grotty human bodily functions, but most of those vom-inducing words won their unwanted accolade because ‘they make us think of a juicy or gone-off lady garden.’ We and our gelatinous and juicy clunges are so claggy and thoroughly unsavoury, ladies, that this poor delicate Metro reporter can’t bring themselves to even type ‘vagina.’

Being massively pretentious at university, I studied abjection and the female body and, as a result, I like nothing more than flinging words like ‘gusset,’ ‘flange,’ ‘moist’ and ‘crusty’ into jovial conversations over tea and a custard cream at church.* This article is misogynist fungus on the clammy crevice of our cultural lexicon. Got a twat? Yeah, it’s disgusting, better get the jet hose. Language is powerful ladies, I entreat you to bust out an emphatic ‘soggy gusset!’ at every opportunity. This is a linguistic gusset, obviously. Your actual, rancid and sodden gusset is, as above, DISGUSTING. Don’t you forget it.

*Just kidding, I seem to burn up on entry to places of worship.

The Sun haven’t printed a nipple since January 21st of this year. Consequently, they’re keen to find other ways of reproducing pictures of lady-flesh and belittling women, albeit on a budget. We could humorously envisage the editorial meeting that birthed this desperate pile of toss, but it’s just a bit too sad to joke about. We can only see a broken man making wretched decisions – poor Dave Dins in a shirt with chicken chow mein pot-noodle down the front, perhaps – red-eyed, broken and beseeching Uncle Rupert, the vicious old tortoise, to bring back the tits. 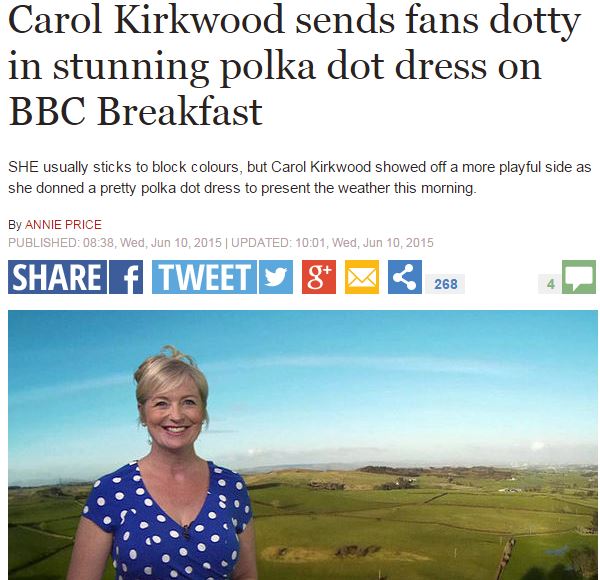 Express readers were bereft when the nation’s favourite yellow-haired conjurer of rain – Carol Kirkwood – effed off on holiday last week. Happily though, she’s BACK and, as reported in the ‘newspaper,’ she recently wore a dress with some spots on it. This ensemble not only brightened the day of weather fans across Britain, but it also saved us from witnessing yet another headline about Carol being in the pink, having the blues, making fellow presenters green with envy or anything to do with that fucking awful Chris de Burgh song.

6) Beauty standards beyond the grave

The laughably monikered ‘intelligent tabloid,’ the Daily Mirror, have stooped so low they could easily scoop second or third prize in the International Limbo Championships without exerting too much effort. Not content with body shaming actual living women, which can be a bit limiting, they’ve started to pick on the deceased as well.

You see, Allan Abbott, the mortician who prepared Marilyn Monroe’s body for burial, has claimed that when she was brought to him ‘she looked like a very average, aging woman.’ Apparently, her roots were showing, ‘her legs hadn’t been shaved for at least a week’ and she was ‘in need of a manicure and pedicure.’ Oh, the SHAME of being dead and hairy.

Special thanks the Mirror for flogging this creep’s book about celebrities’ dead bodies (yes, really) and, also, for letting us slovenly dames know that our beauty standards may continue to be judged 53 years after death. Who knew that even corpses need to rock a bikini body? Can someone please inform all the ghosts of old women in rocking chairs you see on telly? I’m sick to my back teeth of all these unsexy, pasty ghouls whining about. Quick, somebody get them some Immac and a spray tan.

Interesting news this week from Zoe Saldana, who confirmed that her husband has taken her surname. According to this insightful Daily Mail article, Zoe warned her fiancé that other men would consider him ‘emasculated’ if he took her name but, unpeturbed, he replied ‘ah Zoe, I don’t give a shit.’ I like the sound of this chap.

Unfortunately though, the Mail made a glaring error, and referred to Marco Saldana as ‘Marco Perego’ throughout; strange, considering the article is about him taking Saldana’s name following their marriage in 2013. Isn’t that odd? It’s as if…as if the Mail can’t accept the idea of a man taking a woman’s name…no, no, it must be a printing error.

Dear Daily Star, many thanks for reporting on the ‘prettiness’ of women involved in near fatal accidents across the globe. I’m a busy gal, and only have time to read about the injuries of beautiful people, so this sloppily sexist reporting style is a real time saver for me.

P.S. it would be helpful if you could include a photo of a random woman, entirely unrelated to the story, in a see-through top, to illustrate the louche behaviour of young ladies abroad – oh, you have, excellent.

Helena Christensen went outdoors this week, wearing a denim jacket, which afforded the Daily Mail ample opportunity to make hilarious quips about her ‘good jeans.’ Describing AT LENGTH her ensemble, they wrote: ‘Looking stylish in her choice of attire, the star – who once dated Michael Hutchence, following his relationship with Kylie Minogue – added a pair of patent leather flats and a polka dot clutch bag to the mix.’ Well done Daily Mail, for seamlessly reminding us that Helena, 46, nicked Kylie’s boyfriend 24 years ago.

Also, a polka dot clutch bag??? Does Carol Kirkwood know? Imagine if she had a cheerful spotty bag to match her fun and flirty spotty dress – we’d have a heatwave all summer.

Firstly, there were five people who got their kit off on a mountain in Malaysia, yet it is the one with the tits that got the most attention. That is ever so curious. It’s unlike The Sun to focus on breasts in any way shape or form, isn’t it?

Secondly, why are breasts more angering than scroti? (what is the plural for scrotum? It can’t be scrotus, that’s a position in the US government isn’t it?) Apologies for the nut-sack digression there; the only thing that I can think was so vexing for these fearsome mountain gods is something once flagged up by Shakira in her 2001 hit single ‘Whenever, Wherever.’ The small, bodacious Columbian is glad her breasts are ‘small and humble so [one doesn’t] confuse them with mountains.’ Essentially, her tits should have been more humble, maybe genuflected in some mammary way? We can’t really blame those mountain gods, there’s nothing worse than a cocky tit.

1) Brace yourselves, Iris is angry

The Telegraph have gone nuclear on the most intrinsic of women’s rights, with a piece on Mumsnet’s  support of the organisation Abortion Support Network which helps women in Ireland and Northern Ireland (where there are still major restrictions despite being part of the UK) access safe abortion. They labour the point that it is ILLEGAL for women in Ireland to obtain the abortion pill. They conclude the piece by giving an ANTI-CHOICER* the last word condemning Mumsnet’s stance. Please excuse us if we don’t give a solitary fucking fuck on the legality of this. Women DIE without access to safe abortion. They die. But that’s fine, right? She’s just a woman, an incubator for a potential person, who (fingers crossed) will be a boy and not some troublesome mess of womany-ness that might insist on getting herself pregnant.

Do the deaths of women having backstreet abortions matter to you, John Bingham of The Telegraph? What about the misery and poverty of forced motherhood, hmm? We’ll take the fact that the piece is sensitively illustrated with a picture of a fucking ultrasound as a ‘no.’ John Bingham, I would like to invite you to grow your own uterus. Because then, and only then, are you allowed an opinion on this subject. And please note, even with a uterus, the only uterus you’re entitled to pass judgement on IS YOUR OWN. Now take your sanctimonious, right-wing bias and jog on.

*Not pro-lifer, guys and gals, if these people gave a steaming crap about anyone’s life I’ll eat my (Dutch) cap.

To stick it to The Telegraph and support Mumsnet’s fundraiser for ASN click here.

And there we go. We’re left with the feeling that tabloid editors would be positively priapic at the idea of a naked Carol Kirkwood atop a distant volcano, en route from a booze and amphetamine fuelled 24 hours in Shagaluf with only the corpse of a dead celebrity for company but, in its absence, that was the week in Sexist News. Sarah Vine’s attempt at writing an incendiary piece on feminism didn’t even chart and couldn’t even spark up a spliff (don’t do drugs, kids) so, as my twinkly eyed old gran’s favourite, Shaw Taylor, used to say; before retiring for a milky cocoa and some hot, buttered sex, keep ’em peeled.