Our heads are buried firmly in the sand this morning. La la la, we can’t hear you British politics, sorry what? No, can’t help you we’ve got our fingers in our ears. Our childish behaviour is actually a neat segue to the sexist news, since most of our journos need to grow the eff up. Here’s this week’s handful of stinky press droppings…

What the actual fuck do these women think they are doing? You can’t CHEAT at beauty. You are either born 100% flawlessly, faultlessly beautiful, like, say, Kate Middleton. Or you spend your entire life frittering away hard earned cash on ‘products,’ ‘serums’ and potentially fatal, invasive cosmetic procedures to stave off the burning feelings of inadequacy that ruthlessly torment your well-being, like a particularly aggressive and persistent ferret.

You can’t BREAK THE RULES Beyoncé, what if your face turns into a giant eye? What if sellotape is so successful Lady Gaga, that women tell Clarins to get fucked and go to Stationary Box for their cleansing routine? FELT TIP PEN AS EYELINER? What is this lunacy? How can someone possibly use a fibre-tipped pen to do the job of, er, a fibre-tipped pen? What has the Daily Mail unmasked with these frankly disturbing revelations? What if these slovenly harlots bring down the beauty industry with their dangerous and cheap subversiveness? If I were an Avon Lady, (which I am) I’d be afraid. Actually I lied, I’m not an Avon Lady and I’m pouring a Hendricks, laughing myself silly at the idea of volumising face plumping miracle lotion and enjoying my beard.

The story of the Royal birth was over an hour after it began but, to the Express, news values are very particular. A story isn’t done until you’ve dry humped its emaciated corpse and its leg has fallen off, which is why they’ve done Charlotte Saxe-Coburg-Gotha’s horoscope. Yes, that’s right. Her horoscope. Hang on – we’re just going to be tediously sick.

That’s better. Now. Mars was scratching its fanny in the third solar quadrant and there are large rings around Uranus, so she’s apparently going to be a great beauty, unlike her dad, who resembles a bald horse with a combover. She’ll also be as charming as someone with vast pots of unearned cash can be, and artistic. So nobody will have to forge her A Level art project.

Forgive us a brief an intemperate outburst, but Lori Reid can take the Royal baby and this hideous vial of minge dribble and push it so far up her back passage she can taste it. This isn’t journalism. It’s a distasteful smear on the news eiderdown. Oh, and she’s a Taurus, apparently. Yep, I’ve just had a multiple boregasm. 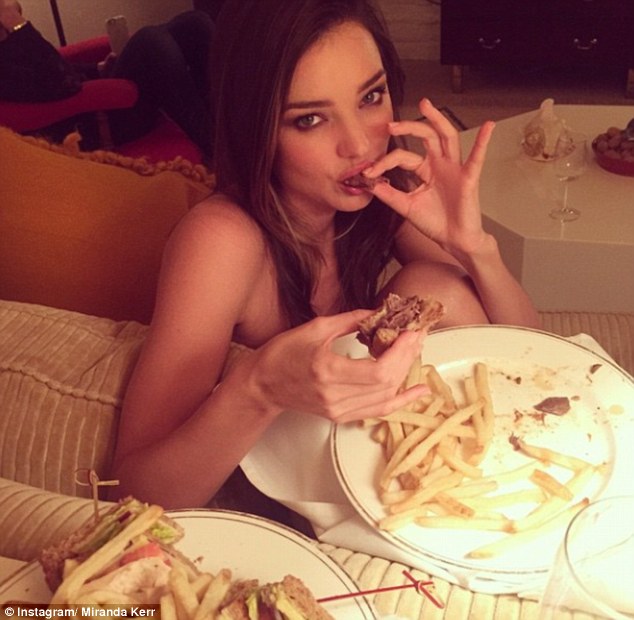 In a commendable news story, the Daily Mail present an exposé about a model looking sexy next to a plate of chips. I for one find nothing sexier than a plate of chips – I ate oven chips with every meal from 1984 – 2012 when the oven broke, so I’m massively on board.

However, I fear the Mail are running out of ideas – I mean, we all know we need to be sexy when jogging, popping to the shops or greeting our husbands ‘pon their return from grouse shooting or playing polo, but must we now be sexy in our living rooms, when we’re eating ready meals on our own?

I’d better be off then, this Crispy Pancake’s not gonna shag itself, is it?

7) Cougar Taming at the circus

Apparently ‘Royal aides were left baffled when one cheeky [circus] performer asked Camilla for a peck on the cheek.’ it’s fair enough really. She is OLD. An OLD woman. Why would anyone want to KISS an OLD WOMAN? What kind of deranged, self-flagellating, sexual deviant would want a kiss from any woman that deviates from the Rosie Huntington Whitley norm? He likely needs some kind of genital-electric-shock treatment. Or some kind of psychoactive drug.

And this chap was warned; the Express reported that people were mouthing ‘No’ and shaking their heads. Presumably the head shaking was grave and sorrowful, since we all know chaps, that if you kiss a woman over 40 your nob will drop off and approximately 47 minutes later you’ll die.

Hello. Do you have tits? Are they in any way three dimensional, or did you draw them on your chest with a marker pen? Because, if they are three dimensional, a man at the Mail with a budding chubby and 100 word vocabulary thinks the side of them is called a ‘sideboob’ and is manipulating himself so frantically he’ll likely end up with penile callouses.

Here’s the thing, Marc. Women have tits. Big ones, small ones and some as massive as your great, fat head. It isn’t news.  You sad wanky man.

Liz Hurley, who met Kate Middleton once, probably, wore a pink coat ON THE VERY DAY the royal baby was born. Coincidence? I think not; I, after all, was eating a rosy-hued strawberry ‘Ski’ yoghurt when the birth of the princess was announced on the internet – a spooky psychic symmetry ushered forth from a realm beyond our ken.

As an aside, what sort of event was this salmon-hued luminary attending? I couldn’t be arsed to read the Express article, obviously, but the striking image shows the socialite, actress and model perched atop a cupboard flanked by nobheads with maracas and 7ft legs, while despondent children drink Fanta in the background.

If this is ‘society’ you can shove it up your arse. With those maracas.

Hands up who’s surprised that the Daily Mail have got a woman to say how pointless it is to vote, and gosh-isn’t-politics-boring, and I feel a bit guilty about this because of all the suffragettes did, but wa-wa ya-boo I’m going to trot out some apathy-based, lady-logic, arse-wank anyway? No. Us neither.

Alleged plagiarist Ruth Styles – question: who needs to plagiarise someone else to write for the Mail? Surely you just need to lean on your keyboard and make disgruntled, immigrant-hating, right-wing noises and that shit writes itself? But I digress, Alleged plagiarist Ms Styles winsomely says she’s not exactly stupid, but will complain about politics being unexciting and she’s registered in a safe seat anyway, blah blah. What would it take, we wonder, to prompt Ms Styles to get excited enough to vote? Free Laboutin shoes? Complimentary colonic-irrigation? A toe-job from George Osborne? One can only guess, but maybe it’s unsurprising that ATOS, brutal austerity, scary fascist minorities, the potential abandonment of the human rights act, food banks and the sell off of the NHS aren’t dramatic enough to prompt someone possibly so ensconced in a Boden dream, to vote. Excuse us while we call her a pyloric sphincter. Ruth, you’re not even an arsehole. 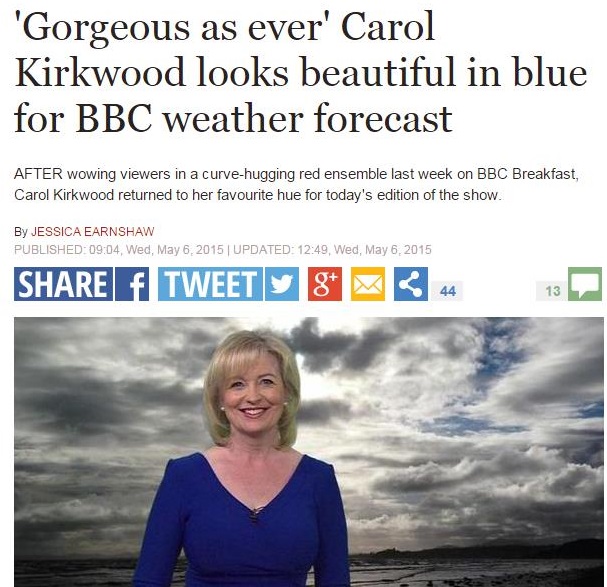 Breaking news: Carol Kirkwood, our favourite yellow-haired conjurer of rain, wore blue on Wednesday. She likes blue.  Blue is her favourite colour, according to the Express!

Another day, another important story from self-styled ‘intelligent tabloid’ the Daily Mirror. They’re a cut above The Sun et al, so they only publish profound think-piece articles that strike at the very core of the human condition, like this one, about a stripper who can smash a melon with her massive knockers.

I am reading this with my peers at the Athenaeum, where we meet every Friday to moot the philosophical teachings offered by this enlightened periodical. Though our intellectual vigour is constantly challenged by this rigorous publication, we are humbly reminded of the words of our learned cousin, Aristotle: ‘the roots of education are bitter, but the fruit is sweet.’

Unfortunately, the fruit has been smashed to bits by a pair of massive tits but, y’know, metaphors and all that.

In a moving piece about the ladies ‘behind’ our Great Political Leaders (snort), the Daily Mail pays homage to Samantha Cameron, Justine Miliband and that Spanish woman they briefly mention because she wears nice shoes. According to the Mail, these women are ‘wheeled out at key moments … And if they are wearing the latest British designer, all the better.’ Why not save the effort, I say, and get David Cameron to simply push a Prada bag around in an Asda trolley? Wonky wheels aside, no Asda trolley could make a faux pas so grave as Sam Cam’s, who removed her monk-strapped shoes (what are monk-strapped shoes? Do monks even wear shoes?) in a bloke’s house last week, without having ‘camera ready’ feet; thus ‘leaving the nation to gaze upon her unvarnished toenails.’ The disgrace! 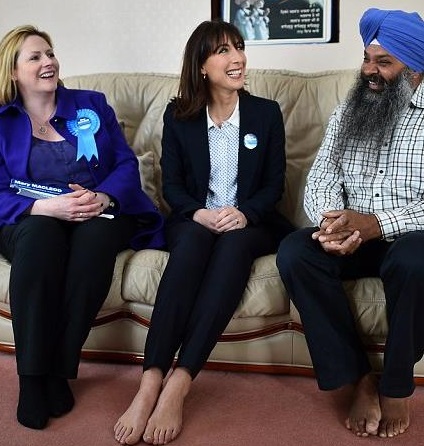 However, the Mail were surprisingly complimentary about Justine Miliband, whose barrister credentials mean she’s ‘more than just a dress.’ Who knew?!

So, kissing old women is baffling, Liz Hurley is a coat psychic and some women have breasts. You learn something new every day and, yes, you’re welcome for these nuggets of odium. We love you all, which is a good thing really since it’s going to get cosy in the handbasket TO HELL. Until next week, chums.