It is once again Friday, that hallowed day which, for many of the 30 something spinsters that read our blog, will end with you all sicking up in a bush having lost a shoe outside the church social or Gala bingo, for the agnostic or worse (crosses self) amongst us. But, in the mean time dear readers, spare a thought for all those poor editors of newspapers who so lack real human instances of jubilance and tragedy, and so must just print pictures of arses and rough-looking royalty. Anyway, we have taken no prisoners this week, we’ve not the house room. Here it is:

10) Clothes have feelings too

Just as we hop around the room putting on pants that could charitably described as ‘vast’ and a skirt that features the stains of many dinners past, comes news that clothes Say Something. Seasoned readers will be unsurprised that it’s the Daily Mail who are telling us this, or that they have decided that one Ms. K. Brook’s skirt is ‘flirty,’ rather than, say, a piece of fabric worn in order that we can’t see her underthings. 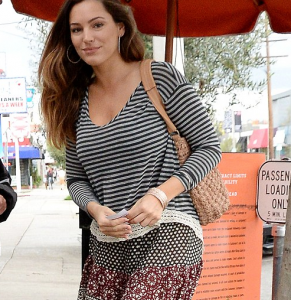 There are numerous things about this that would strike even the most gin-addled brain as erroneous, chief among them being the fact that some pimply adolescent with the wit, brains and charm of a used sanitary towel may yet appear in the dock citing clothes that he believed had told him to touch the wearer’s bottom.

Assuming that we are similarly allowed to assign clothes an opinion about our mental state, I oft wear a cardigan that screams ‘fuck off.’ It is my feted ‘fuck off’ garment of choice; I have a pair of steel toe-capped ‘just try it’ boots and a beloved t-shirt with a very stubborn red wine stain that laments my slovenliness. But, even if I did have a skirt that was somehow independently ‘flirty,’ my boots would temper the advances of anyone saying some fabric was asking for it. Capisce?

If you’re not glamorous, you’re literally vomiting in the faces of Our Dead Heroes and ostentatiously flashing aged survivors with your untrimmed badger. At least, that’s what the woman-loving delights (hackneyed Tories) at the Telegraph think, with a piece that could only say WE WILL SHAME YOU more effectively by coming around to the house and screaming it through the letterbox. 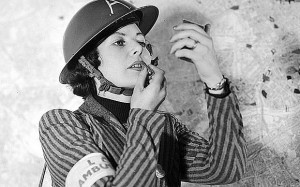 We’re told that all the women of the nation craved silk-soft powders, that beauty was a duty and that a war waged against a rapacious tyranny was actually being fought for lipstick. In a bid to look like they had silk stockings, women coated their legs in gravy browning, for the love of fud. I have accidentally ended up with the contents of an upturned gravy boat down one shin after a particularly vigorous Sunday lunch. Unsurprisingly, it was not sexy or attractive and I smelt of gravy, but hey ho, I’m anti-war so doesn’t matter if I look like a bedraggled trollop. But presumably at the time, anyone who didn’t worry their pretty little heads with these things was either in league with Satan or some kind of hideous lesbian, but then the Telegraph has never really done nuance. Or warmth. Or humanity. Or compassion. 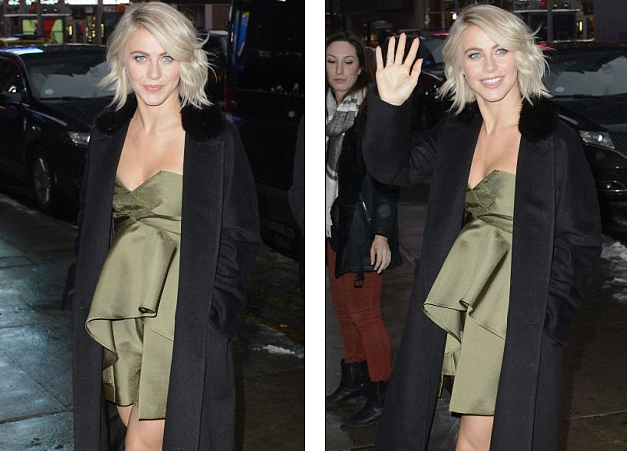 Not being male, a condition which seems like an estimable state of being, we assume that there is nothing worse than having a vigorous session of self-pleasure over the celebrity pages of the Daily Mail, with its flashes of thigh and freakishly pixelated ladyparts, only to see Julianne Hough decked out in what has already been called, by a subeditor navigating the wilder shores of reason, a ‘bizarre green dress.’

Readers who have never found any reason to leave the Home Counties may note that Ms Hough is famous in America for dancing, and that her crime was showing too much breast and having OUTLANDISH and confusing pleats.

Please note (see above) that The Sun online no longer even bothers with the pretence of being purveyors of actual news. If they’d admitted they were a toss-ridden spaff-rag sooner, the whole Page 3 furore would’ve been a moot point. They could have merrily flung lovely, bouncy tits on each page, resided greasily on the top shelf in fusty newsagents and a much smaller percentage of ire-filled feminists would’ve given Dinsmore and Rupes a hard time. Poor lambs. 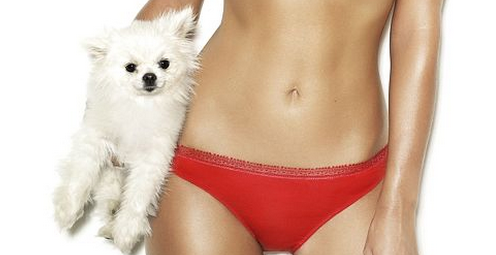 But anyway, as an aside to the discovery of the Sun‘s new and refreshing self-awareness, it seems bums are now a thing. Ladies’ bums, to be precise. Who knew arses could be so exciting? They are so multi-faceted, guffing, pooing *and* being sexy in see-through pants. As it is thus, a young lady in sheer undercrackers is the first and most important story on their non-news website. Which seems fitting, since so many of us do in fact have arses of our own, so this is not really not news at all. Her dog, which looks stuffed, is captioned as being ‘lucky’, which makes us a little concerned that the picture editor sees the dog as having erotic designs on its owner, but then it takes all sorts to work at the Sun eh?

6) And now for the science bit…

Laughably positioned within The Times’ ‘Science’ section is this stool sample of an article, about an imaginative ‘study’ conducted by Stanford University. Apparently, some male academics watched people speed dating, and came to the conclusion that women like it when blokes interrupt them. During my 47 billion years at university, I’ve met a lot of academics. It would be fair to say that approximately 91% of them had never actually met a woman, so I am concerned re. the methodology of this study – how did they measure ‘winning a woman’s heart’ during 90 second conversations in a bar? I will hazard a guess that the results of this study were dreamed up at 11.37 pm on the night before the deadline, based on conversations observed from repeats of ‘Cheers’ on Gold+1. 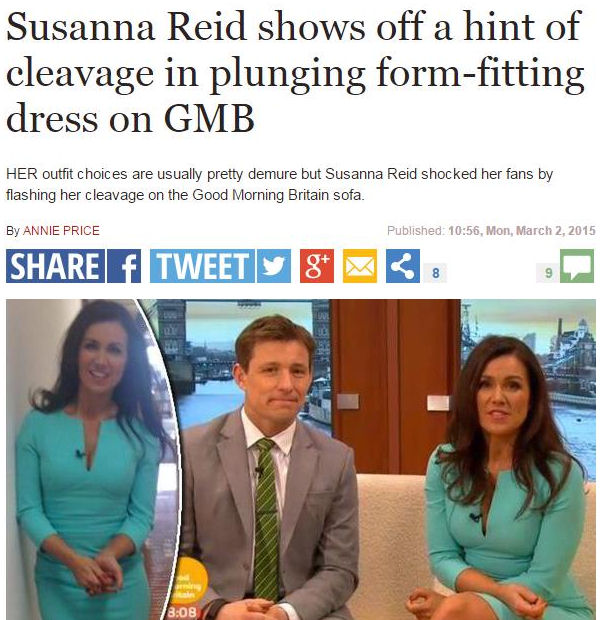 Like Springwatch, but without the baby squirrels, professional editing or life-affirming, feel-good factor, the Daily Express have, once again, turned their binoculars on Susanna Reid. This article – one of five they wrote about her this week – responds to the SHOCK (i.e. extreme sexual excitement) her fans (i.e. Express editor, Hugh Whittow) experienced upon glimpsing a mere four centimeters of her decolletage on breakfast telly. I wonder if the chaps at the Express have backed their jotters with Susanna Reid pictures, in the style of my ‘Mulder off the X Files’ GCSE geography book? Those sedimentary rock diagrams didn’t stand a chance…much like the untouched piles of actual news festering on Whittow’s desk.

4) Woman has opinion tinged with feels

Emotions. We all have them. Except feminists, obviously. But while normal women are crying over menstrual cramps whilst eating ice-cream, getting weepy over ’24 Hours In A&E’ and laughing when something bad happens to Nigel Farage, sociopathic men are running the world in a sensible, level-headed fashion that has in no way caused wars or gibbering inequality.

Let’s face it, there might be some lady-friendly jazz videos out there, but there are also approximately 497 bajillion light years’ worth of films that debase, harm and ruin women and girls, so maybe our Jane was okay to be a bit unimpressed. Perhaps she was right to be, I dunno, upset or even OUTRAGED. But oh no, she’s a woman and women can’t express dismay, because that means her opinion gets rubber stamped with ‘MIMSY-LADY’ and EASY TO DISMISS COS TITS. But, of course, if a woman doesn’t emote, as per your average stony-hearted feminist (being OFFENDED notwithstanding) she’s basically just a cow. Seems ladies, if like Jane you have an opinion which verges on the less than neutral, you’re between a rock* and a hard, pulsating cock.

Pregnant women, eh. They just will not stay indoors. In this article about the Duchess of Cambridge going somewhere, the Daily Mail illustrate – with a willion high definition photos – how tired (i.e. dog rough) she looks. Many Mail readers agreed: ‘she is aging really fast …at 33 she looks like a 40 year old’ commented Benny from Glasgow; ‘a pointless and unattractive creature’ agreed Benny from New York, who later made three comments about her hair being devoid of vitality (the SHAME).

For the final time: up the duff wimmin – you’re disgusting. No one wants to look at you (unless you’re doing that Demi Moore pose with your tits out). You may as well get used to staying indoors anyway, as everyone will slag you off if you leave the house without the baby for the next seventeen years. It’s ok though,  you can spend lots of quality time on your own, cleaning the sink, weeping soundlessly and doing exciting things with potatoes. Ah, the joys of motherhood.

Oh Theresa May, won’t you stop focusing so much of your time on the Home Office and please, for the love of Paul Dacre, think more about the blouses you’re wearing? Honestly, Beyonce has the same number of hours in a day, and most of the time she looks half decent, so there’s really no excuse. The Daily Mail have had enough of it; we’ve ALL had enough of it. Won’t you just resign, so we don’t have to worry about this mid-lifestyle trouser agony? You know what, forget it Theresa – let’s just get a man to do your job instead, this ‘fashion stride’ anxiety is utterly debilitating for Britain. 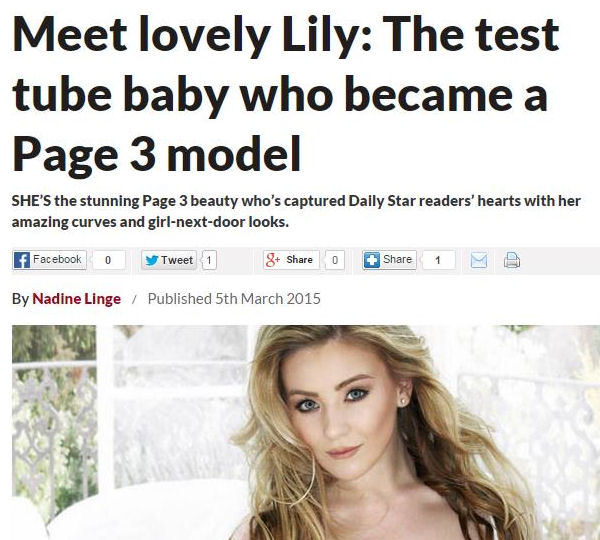 Since The Sun dropped Page Three like a boiling syrup pudding accidentally microwaved for thirteen minutes (I still have the burns, Heinz), the Daily Star have gone all out to reassure bereft wankers that the feature is still ever-present in their tabloid. This week they featured a ‘story’ about one of their models, who was conceived via IVF (so?), with the shudderingly creepy headline ‘Test Tube Totty,’ which they changed mid-morning, presumably after the LSD had worn off.

Let’s take a minute to congratulate Richard Desmond. Prior to this moment, newspapers generally started objectifying girls around the age of five or six, at the point when it’s ‘acceptable’ to talk about their nice legs (hello Daily Mail!) Luckily for us all, we no longer have to wait that long – we can now objectify them pre-birth, even pre-foetus. We can objectify them at the ‘science’ stage. Well done Desmond, well done.

Feeling faintly green about the gills? We apologise unreservedly, profusely even. We’ve got an eventful weekend: Iris is going to the seaside for feminism and general debauchery, and Flora has her National Trust guide to read from cover to cover. With gin obviously. Toodle pip darlings, till next week. Flora and Iris x