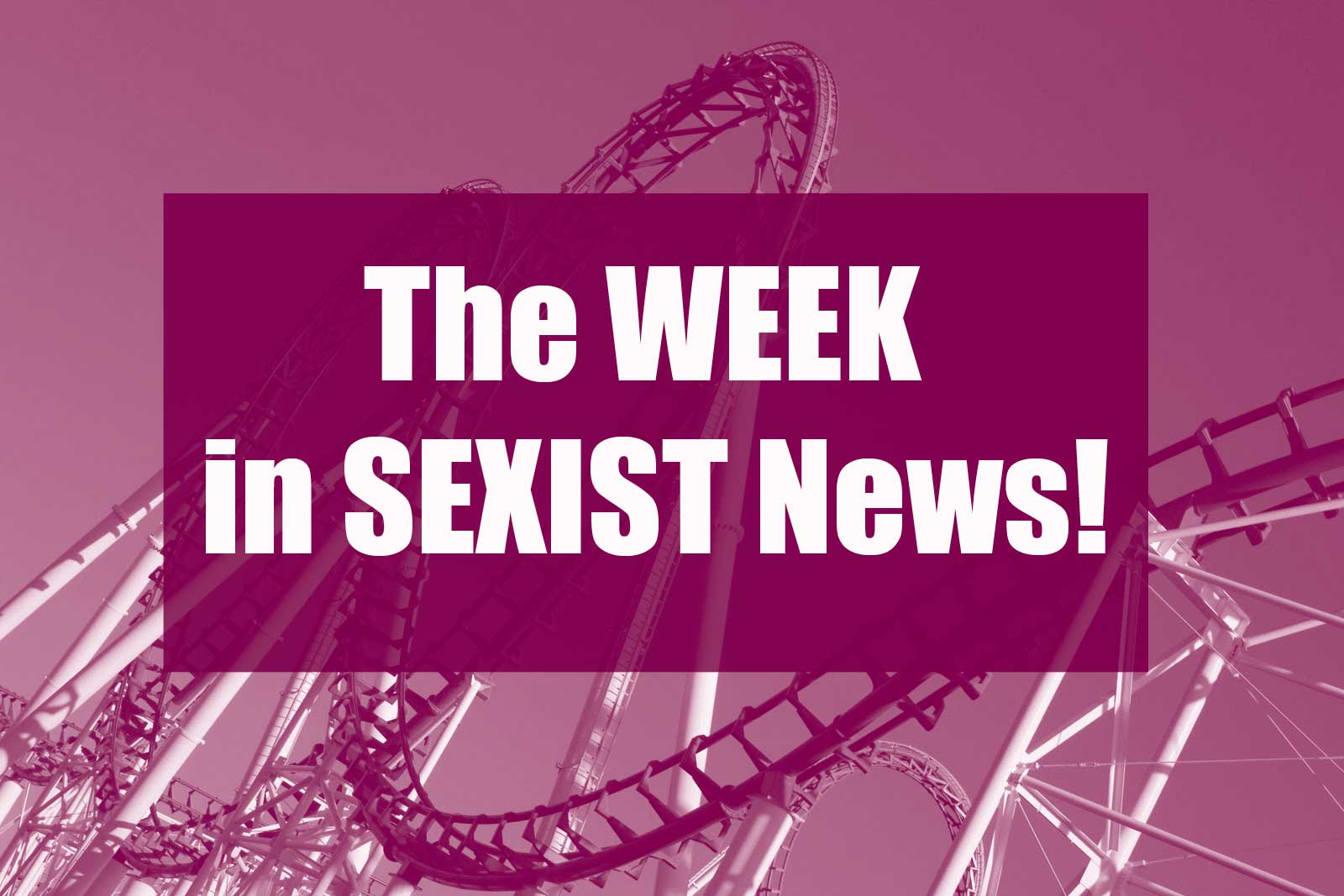 Dearest readers, welcome to The Week in Sexist News: Advent Special. Now, speaking of advent, PUT DOWN that Dairy Milk Calendar and STOP guzzling that hot wine with sugar in it – it’s DIET TIME! Yes, this week those hallowed gatekeepers of ‘news’ have churned out approximately 732 articles about what we should and shouldn’t be troughing in order to look svelte at sophisticated festive parties. Where are these parties? Where? The last Christmas do I went to comprised of three couples having a massive row and a teenage boy – covered in his own sick – trying to have it off with an ironing board. During such turbulent times, dear readers, the only relief is to be found in a sturdy pint of Baileys and a yule log. Now, what was I saying? Oh, yes, here is your weekly feast of Sexist News. Bon Appetit!

Madonna’s entrance back into the public eye saw mixed reaction from the tabloids this week. The most pleasing one, perhaps, was provided by the teenage boys over at The Sun who, under strict instructions not to say anything too nasty, came up with this original, witty and not at all woman-hating front page: 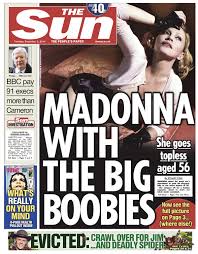 David Dinsmore’s version of ‘celebrating’ women is the tabloid equivalent to a pervy drunk attempting to bury his face in a complete stranger’s cleavage and being dragged off by embarrassed bystanders, whilst screaming ‘I meant it as a compliment!.’ Go home The Sun, you’re drunk. 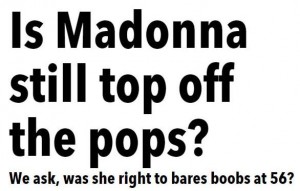 Still trapped in a moral dilemma regarding the wank implications of Madonna’s 56 year old tits, The Sun took the streets to ask a random selection of morons whether it’s ok for women over the ripe age of 24 to reveal any part of their bodies, ever. Josh Smith, a boy of about twelve, who was found lurking outside Tesco’s in Bristol, said ‘it’s a bit too old to be posing topless; it’s time she started acting her age. I’d be ashamed if it was someone in my family.’ ‘I don’t see why any amount of money would persuade someone to flaunt themselves like that at THAT age’ sneered Tom Flood (real name), a miscellaneous bloke from Glasgow.

To complete the hat trick, Dinsmore wheeled out bitter Corby-deserter, Louise Mensch, to stir up a bit more bile. ‘The sad trend of older women posing naked…is about as empowering as a burka – i.e. not at all’ she oh so ‘controversially’ snorted, ‘she’s ending her career in a way that saddens ALL her fans.’

Oh poor, poor Madonna. I bet she’s positively roaring with grief that a former MP for Corby and a nob named Tom Flood think she’s going off like a bad peach.

On the surface, this is a ‘fun’ article about party wigs. About two paragraphs in, however, it becomes clear that the story is actually about a Daily Mail journalist with abysmal self esteem, who’s married to an absolute grade one arsehole named Tom. Bell-end-cock -gerbil Tom, who ‘has always been possessive’ about wife Charlotte’s hair, helpfully provides feedback on each look. ‘Tom says I look like Morticia from the Addams Family,’ Charlotte says of her black wig, ‘to be fair, it does accentuate the bags under my eyes…the children say I look like a witch.’ Whilst worrying that a long wig will make her look like ‘mutton dressed as lamb’ and a short one won’t suit her ’round face and double chin,’ she bravely tries on a platinum bob which, in Tom’s esteemed opinion, makes her ‘look younger (yay) and slimmer (double yay).’ Donning the final hairpiece, she reports:  ‘Tom says “I didn’t recognise you” in an alarmingly positive tone, before asking if we can keep it.’ Someone stage an intervention, please?

Following the success of last week’s Chip Shop Rejection Diet, which saw women across Britain consume only green tea and bits of fluff in order to be deemed acceptable to fast food establishments, The Sun have now launched a handy Rollercoaster Humiliation Diet. Yes, for all you fatties who have been cast out of Flamingoland for being so fucking disgusting, this one’s for YOU. It seems the weight loss goal du jour isn’t fitting into a pair of tiny, tiny jeans; it’s looking svelte on Griffin’s Galleon at Chessington World of Adventures. Buckle up ladies! 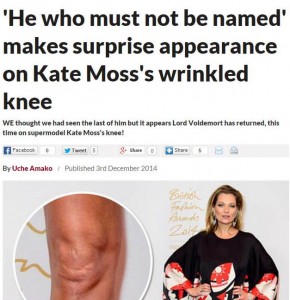 The Daily Star are reminding us that all women over 40 are, in fact, evil, as demonstrated by the appearance of a baddie from a children’s book on Supermodel Kate Moss’ KNEE. Poor Kate, I really can’t keep up! A few weeks ago we were worshipping her arse, then her ENTIRE LEG and, this week, she’s got Demonic Knee Syndrome. Cover up ladies, especially if you’re over forty – or risk having the Daily Star’s Facial Recognition Team pour over inches of your bare flesh, only to discover Rumpelstiltskin nestling in a place which must not be named.

Crafty Claire Coleman at the Daily Mail shows us there is literally no excuse for not making a grueling beauty regime part of your daily life: everything you need is in your local B&Q, and it’s a BARGAIN! ‘It’s all about preparing the surface and then making it more attractive’ she reasoned. Excellent. Of course, she’s not suggesting we grind our faces off with power tools before making our way over to Rymans for new ones, no, that would be silly.

Next week we find out how she got on using shed and fence preserver in place of fake tan.

A mere two days after going live with the commendable Rollercoaster Humiliation Diet, The Sun tackle another weighty issue: the perils of topiary entrapment. Readers, we will not ask why Natasha was in a bush in the first place, nor question why her girth made it impossible to escape. We will merely thank our lucky stars that this arse-wipe of a comic has got our back. Nature’s a bitch, innit?

3) The gloves are off

This week’s household necessity about to be obliterated by the EU is, apparently, rubber gloves. QUICK, STOCK UP on them – those filthy foreigners can’t be trusted when it comes to our toilets – after all, some of them wazz in hole in the ground (it’s a miracle the whole of Europe isn’t riddled with dysentery, the dirty buggers!) Thank sweet Jesus the Daily Mail are on hand to scare us into frenzied bulk buying at Wilko. Just one thing though…this article appears in the Femail section. This must be a mistake, obviously…it’s not as if the Mail think it’s 1952, and want women to be quietly convinced that their role in life is to stay at home and polish the bog…no, it’s definitely a mistake. 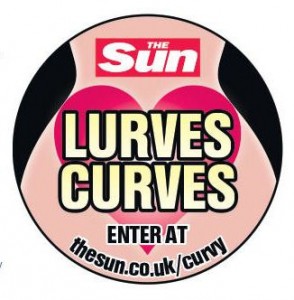 As if done on purpose to confuse us into submission, The Sun unveiled the winner of their plus size modelling competition, The Sun Lurves Curves, in an piece positioned betwixt approximately ten thousand articles re. how to lose weight for the party season. This is the winner, just here: 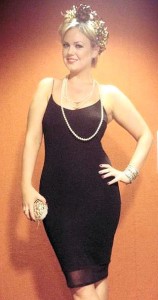 Yes, this woman is the winner of a PLUS SIZE modelling competition. Well, The Sun never specified plus WHICH size, did they? After all, a size 10 is plus a size from an 8, innit?

1) Invasion of the plastic babes 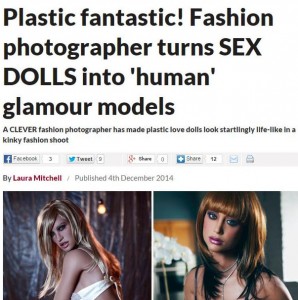 It’s finally happened; the Daily Star have replaced women with plastic sex dolls. Considering the surgical levels of photoshopping going on at the moment, it’s probably easier to start with a factory made, non-perishable babe than go to the exhausting lengths of making real women look synthetic. Even The Sun are at – and they PRIDE themselves on photographing only the most natural, organic tits. Just look at what their ‘post production’ intern did to Helen Flanagan this week: 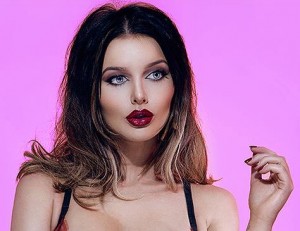 No, no, sex dolls ARE the future: you don’t have to pay them or worry about what they’ll say on Twitter and their tits will NEVER be 56 years old. Sorted.

Well, that’s it for this week beloved readers; we’re off to eat a yard of Jaffa Cakes.

See you next Friday!