Good morning! Oh we’ve missed this, trawling through copy and images that have been knitted together by people being fuckwits nine to five, just so they can afford oatcakes and renting a shoebox hovel somewhere borderline trendy in that London. Unless, of course, they’re Sarah Vine and have help in pretentiously furnishing their second residence from the national coffers; in which case there’s no excuse for being a hate-filled windbag. But venomous Gove-intimates aside, we have an acrid fucktonne of guff for you today, so pointlessly protect your nose with your cardie cuff; these are stinkers…

We’ve all been there, to NA, sat in the circle, staring at our laps while others spoke about the debilitating shame, the real trials and tribulations and hardships we all just bring on ourselves when… when we have nipples. Yes, Nipples Anonymous are having a surge in membership since women up and down the land saw Amanda Holden ‘smuggling some peanuts’ down the front of her dress and decided to look for support.

Why on earth was she allowed out of the house without some kind of lead breastplate for hiding those, frankly obscene, body parts? Anyone would think, Express, that 100% percent of the population had them and some man-type, irritating ones even go shirtless come summer… Surely not. But the real lesson here is to deny your anatomy, especially any bit that might feel nice and be really ASHAMED of it. Unless you’re a man or you’re actually being used to sell something. Then live it up. But not too much, you trollop.

9) Literally one shade of grey 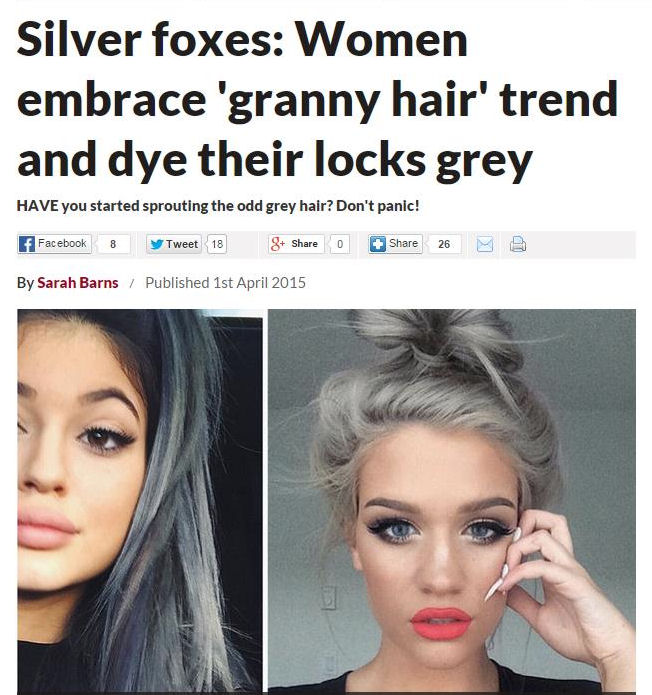 Wimmin, don’t panic! According to the Daily Star (and other comics, including the Mail) grey hair is IN! It’s totally IN!!! ‘Hurrah’, you cry, kicking that crumpled box of Nice ‘n’ Easy towards the kitchen bin, ‘I’m FREE! Free from the shackles of patch testing, scalp stinging and latex gloves ten sizes too big! Society will now accept me in all my Pagan greyscale wonder!’ But, hang on…there must be some sort of mistake…all the grey haired women pictured are clearly seventeen years old, and they’ve apparently dyed their hair to be fashionably ‘ironic.’ Hmm, perhaps the Star couldn’t find any women in their 30s, 40s, 50s, 60s, 70s, 80s, 90s or 100s with actual grey hair to include in this article? There aren’t many of them about after all; you only have to put the telly on or look in magazines to see that all women in the western world are under 22, and most of them are blonde or Kardashians. So that settles that then. 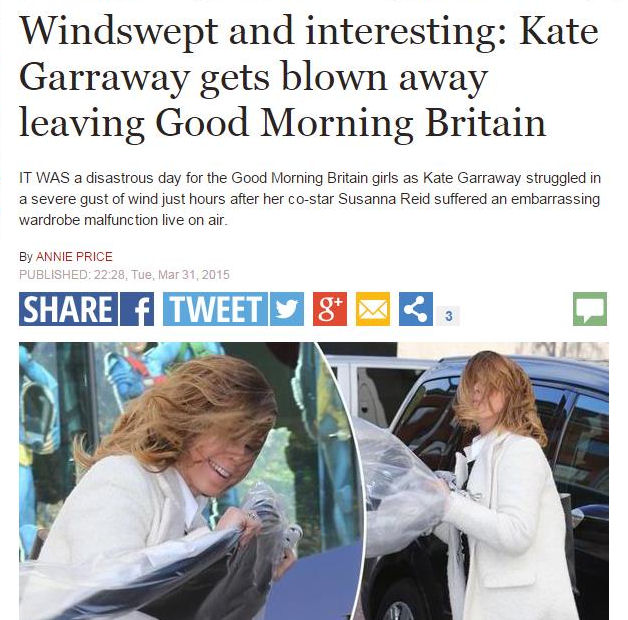 STOP what you’re doing immediately; did you know that Kate Garraway ‘struggled in a severe gust of wind’ on Tuesday? Funnily enough Daily Express, I suffered a similar fate in the aftermath of those out of date Co-op falafels. Or should that be falafel? Either way, my arse will never be the same again. 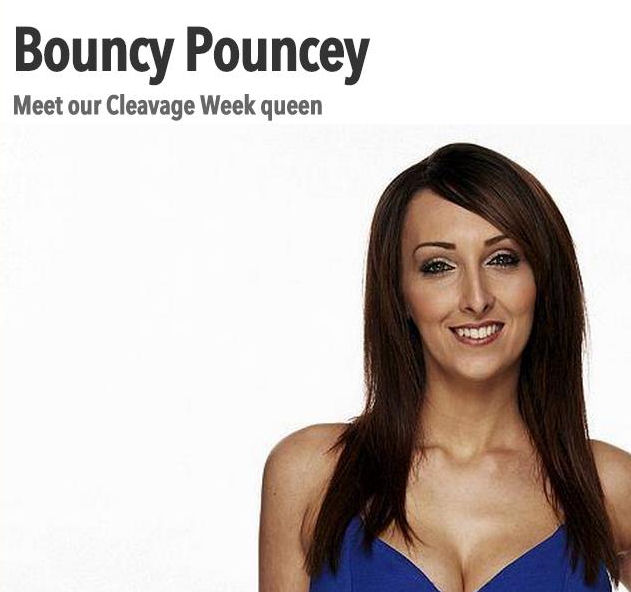 Apparently, The Sun have held some sort of tit contest, or knocker knockout if you will, and have crowned a woman named Becky Pouncey the winner, presumably so they can repeatedly call her ‘bouncy Pouncey’ in the style of an oversexed year eleven P.E. bully. Anyway, Becky won an amazing prize, which involved wearing an ill-fitting bra and laughing at nothing while a strange man took photos of her general tit area with a zoom lens. ‘It’s like a fairy tale’ she remarked, which is weird, as all the fairy tales I remember involve dogs pretending to be grandmothers and witches being chucked in bread ovens but, hey, who knows what goes on at Murdoch’s gaff, eh? Later in the 200 word ‘article’ it is stressed that Becky’s boss – the manager at Matalan in Nottingham – put up her photo and told her: ‘that’ll get the punters in.’ Ahh, having your body objectified in the name of increasing towel sales at Matalan, what a fairy tale! 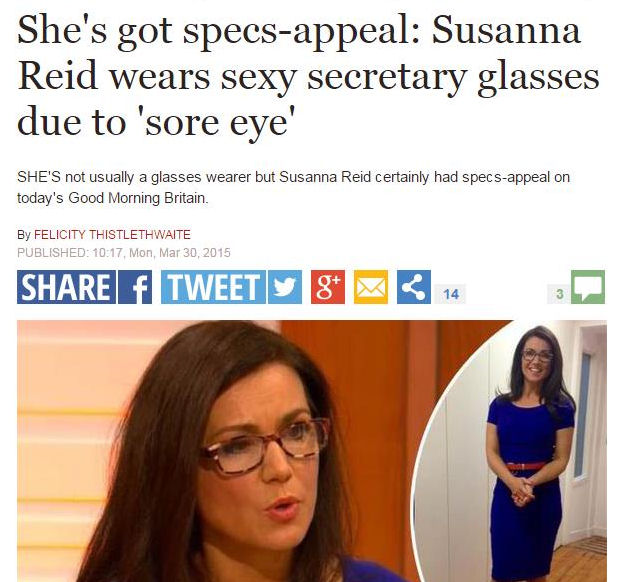 The Daily Express can’t motherflipping believe it – their beloved Susanna has gone and put glasses on, like some sort of depraved secretarial sexpot who’s begging for it. I mean, yes, she’s got eye problems and all that, but clearly these spectacles signify that she’s a right goer and she’s wearing them to be a tease, the saucy bugger.

It must have been a slow news day, because the headline of the following article was: ‘Camilla to sell honey made by her own bees to raise money for dog charity.’ It’s all happening, innit? 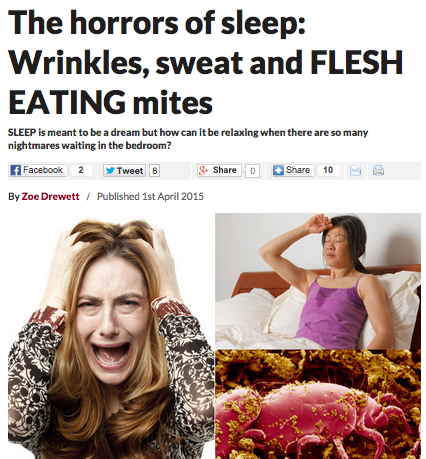 To sleep, perchance to dream, to dream of being a beautiful princess, fair of face, smooth of brow, clean of sheet. Not some wrinkly, sweaty, bovine disaster area that sleeps face down in their own festering juices and the multiplying faeces of flesh-eating mites. Phew thanks Daily Star, how else would I know I was supposed to be insecure whilst out cold.  Look at the ladies in the pictures being horrid screechy, liney, sweaty ladies. How DARE they?

Also, do you change you sheets more than once a month? Well bully for you. Not likely in Chez Clot – I’m short, it’s a flipping nightmare. I have to stand on a step to be able to shake the damn duvet cover over the duvet, and that’s WITH the help I got from Carol Vorderman, all those years on How II when they showed you how to put a duvet cover on in under 4 hours. So bollocks to that, and I’ll sleep face down – sod the wrinkles which are actually caused by quite unavoidable factors called physical maturity and gravity – it’s more comfortable and makes one much less likely to snore. Tip there for snorers. Stop it. 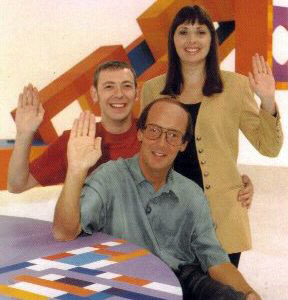 Hello, lesbian mothers. The Daily Mail has decided that one woman’s experience can stand in for all the human variety that same-sex partnerships can offer.

This thick, creamy slice of Mail branded hate is served up by actress Hetty Baynes, whose troubled childhood seems to slip nicely into the Mail‘s box marked ‘HOMOPHOBIC AGENDA’ in indelible ink. Hetty says she wasn’t very happy with her two mothers and this is sad, but Daily Mail, she says it had more to do with them erasing her father than, y’know, the lezzing.  And there’s the fact that plenty of children of heterosexual parents aren’t having a fucking ball either but, as above, there’s an agenda to push and no time for nuance, especially in their headline. Though this is despite the fact that the Mail headlines are often interminably long and actually could fit in a tedious amount of nuance.

But if you must read this massive gust of blah, it’s worth it (in a not-very-nice-way) for the mawkish payoff, in which Hetty figuratively tilts her head to the side, looks a bit sad and says something about ‘an innocent life.’ Gentle reader, let us be clear: Hetty had a shite old time and no denying it, but on reading the appeal to think of the children, lest your deviance ruin their sweet, pure lives, we fear we have just vomited down your cardigan. Here, have some Jif. And a sponge. 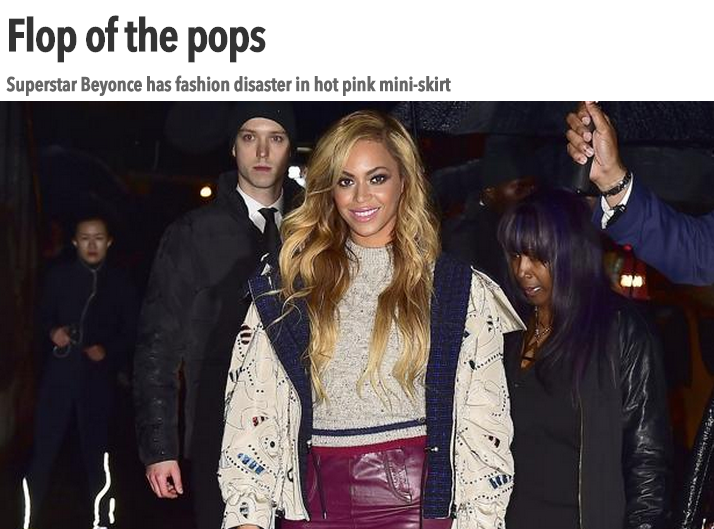 Oh Beyoncé, Ed Dyson really doesn’t like your outfit and he’s being a massive bitch about it. Apparently, you’re TEN YEARS too old to be wearing that skirt and those boots and (clutches pearls) a Big Jacket. Gosh, you’d best go and set fire to all of it, right now. Because if Ed from The Sun doesn’t like your skirt or jumper or (crosses self) Big Jacket, then what have you got left? You might have a vast fortune, a beloved daughter, a doting husband, a stellar career, but so what? Where’s you effing DIGNITY?

A few years ago, during the winter of a Vegetarian experiment, my mother was chatting about a disappointing Quorn sausage she’d battled at a Toby Carvery, which quickly developed into a conversation about Paul McCartney’s sex life, and then careered towards the topic of Jane Asher. ‘Oh Jane Asher wasn’t just an actress and a cake maker, you know’ my mother said. I waited for her to continue, but she just stared questioningly at the pile of ironing, shook her head and muttered ‘oh … no, no, actually she was.’ What Ma Cramp didn’t realise is that Jane Asher is also The Oracle. Yes, as highlighted in this week’s Femail, if there is a debate (there hasn’t been a debate) about an issue that divides British women (a brown skirt hasn’t divided British women), particularly an issue that Sarah Vine has said something controversial about (yawn), then an easy solution can be reached by simply asking Jane Asher. Who knew?! We’ve wasted YEARS asking Jane about Royal Icing and the revival of Crossroads, when she could’ve been sorting out the miners’ strike, the NHS crisis and my amorous intentions towards that nobhead who wanted to be a rapper. #AskAsher 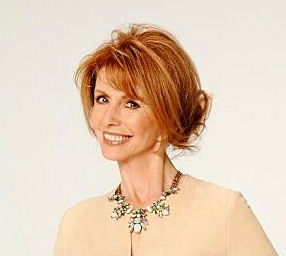 1) An omission so glaring, Cynthia and John are wearing sunglasses 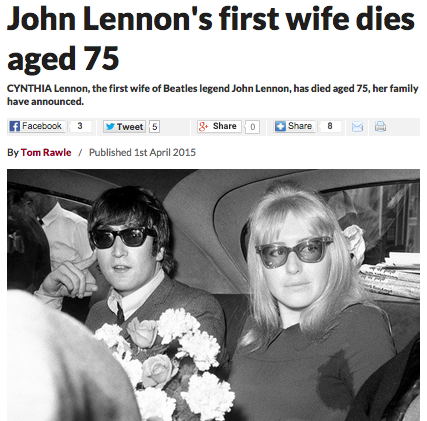 Anyone else see a problem here? Just a teeny, tiny issue? Like MAYBE the Daily Star forgot to mention something crucial in the headline? You know, like the NAME OF THE FUCKING DECEASED? Nice one Tom Rawle, you ginormous sexist bell-end.

So that’s that darlings. Another week, another glutinous swamp of word turds. Do enjoy resurrection weekend, however you choose to spend our national holiday dedicated to forgiveness and a ghost. The Daily Star bloody loves ghosts; they should be all over this, with something to do with spectral tits, ‘ectoplasm’ and a pun about a second coming. Blimey, maybe we should be working for those clowns. Only kidding, we’d rather drink a pint of Immac.

Anon dear readers, until next week, Flora and Iris xx