Morning sports fans. So, it’s Friday and if you’ve been anywhere near a tabloid this week you’ll likely be feeling all demeaned and grubby, maybe with a startlingly reduced IQ. We’ve spent the last two days looking at this river of brain corroding smeg and both feel much stupider. Iris can no longer remember any of her passwords for anything and Flora fears she may never be able to rewire a plug again. But, if you have brain cells to spare, we bequeath you TWISN…

If The Sun were an unpleasant teenage boy on the bus:

Ah mate, she was well upset by people sharing her tit pics, it DESTROYED HER. Look at her here with her kit off. There you go, nah, no nipples, shame that. Still would. [picks nose and eats it].

9) Maths will save you from a clammy gusset

Gee wizz I wish I didn’t have a silly lady-brain. I wish I had proper, rigid man-brain, made of computer parts, granite and protractors. Instead I’ve got this shit, squidgy one, that’s made of lycra, bits of feather boa and parma violets. But, oh! Oh to be endowed with true intellect! I could be a real Mathematician and do important Man-mathematiciany-type calculations, the kind that The Daily Mail would respect and publish. Not the kind of frivolous balderdash probably thought up by silly Lady-Mathematicians about handbags and shoes and… Oh. Hang on a minute… 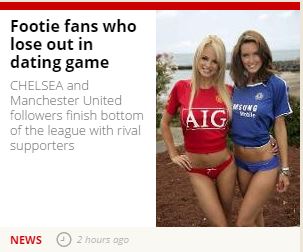 The most pointless survey ever conducted has revealed that fans of Manchester United and Chelsea football clubs are the least likely to date rival supporters.

To illustrate these important findings, The Sun helpfully published pictures of Page 3 models in knickers, and provided a bonus photo of a woman in a retro kitchen, dressed like a 1950s sex waitress, because most football fans dress this way at home. 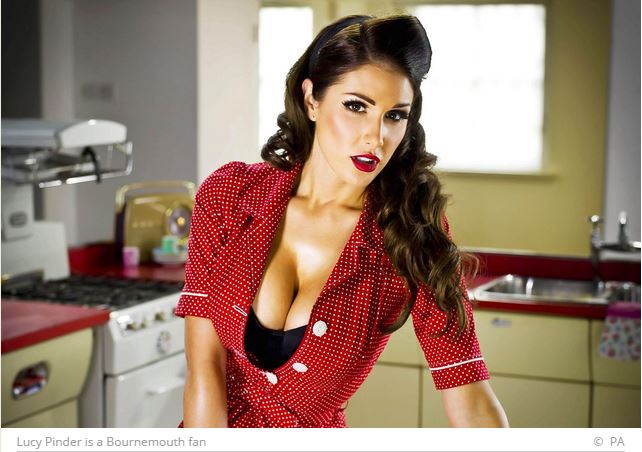 Ahh, nothing screams FOOTBALL like American diner memorabbilia and wall to wall formica.

7) The Star debunk five myths they just made up 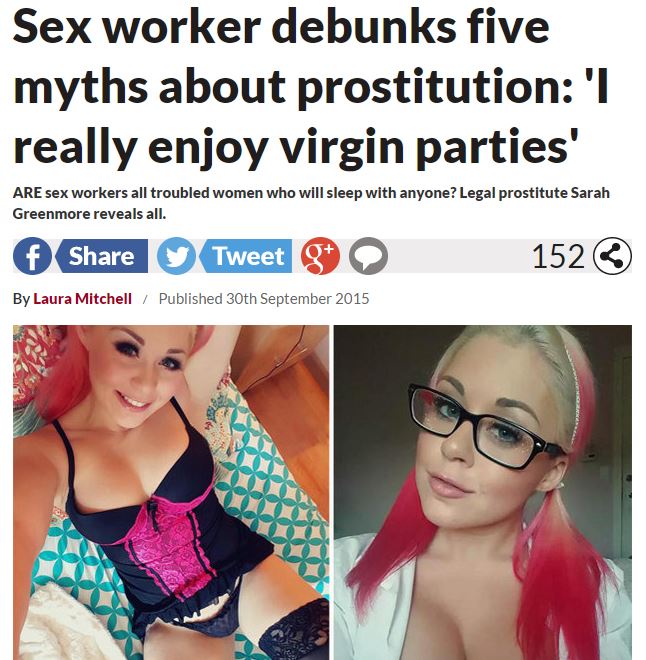 Isn’t it admirable of the Star, debunking these myths by speaking to one person repeatedly, and not interviewing anybody else whatsoever? I’m now convinced that there’s no dark side to sex work in any situation, ever. What a relief. Luckily, there’s a link to this woman’s social media platforms, so I can contact her for a fun shag. Cheers Richard Desmond!

6) The Daily Mail is very concerned…

This is FRONT PAGE NEWS: Internationally acclaimed human rights lawyer, Amal Clooney, has gone and paid £500 for some fancy shoes, and they’ve given her bunions! The Daily Mail hate to point this out to everyone in the entire world, but they’re concerned. Look! Look at this close up of her bunions, presented in high resolution for you contemplate quietly. 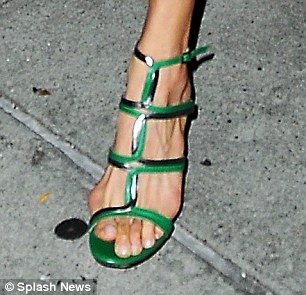 Perhaps Amal, 37, she should stop going outdoors altogether? After all, she’s married now.

The fridge isn’t going to clean itself, is it?!

So. Liz Hurley wore a dress during the day and then changed into a different one. Both were pink, so obviously she’s fond of a ‘girly’ hue. What is the meaning of such a costume change? Now, we at Tights can only speculate on her motives. What kind of debauched attention seeker wears more than one outfit in a day? Really there can be only two possible explanations: 1) She had a kebab for lunch and got garlic mayo down her front and, despite going at it with a damp flannel and awkwardly drying it under the gale-force hand dryer in the loos, it still looked suspect.* Don’t worry Liz, we’ve all been there. I am incapable of ingesting anything without wearing it. In fact, I may start accessorising with brooches made from Rice Crispies so it looks like I’m adorned in foodstuffs as an avant garde fashion statement. But I digress, let’s consider motive number two Daily Express: Maybe she fucking felt like it.

Yep, one day all our mundane needs will be catered for by bored-looking machines. But it’s ok, because it means no one will have to deal with tedious human emotions. Interestingly, only lady fuck-bots are pictured in The Sun’s article, despite there being a man fuck-bot on the market. They asked some people on the street for their opinions on shagging a rubber C3PO in a shit wig. The winning remark in this context has to be from the delightful Rob, 27: ‘Yes, I’d try anything once. It would be a bit easier than a woman because you wouldn’t have to buy it drinks beforehand.’ If, as scientists predict, robots will soon start having thoughts and emotions of their own, we do hope Rob’s potential fembot has an iStrop and demands a Castrol and tonic before she’ll put out. Chin chin Rob! 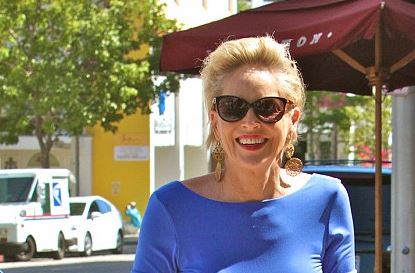 The blonde, 57, showcased her assets in a tight blue dress as she stepped out to dinner in Beverly Hills.

Stone, 57, went braless in the dress, which had a daring open backed design.

The actress, 57, really ought to stay indoors and decay quietly, preferably with a bra on.

2) Sex symbol was not a sex symbol at seven. Funny that.

So Emily Ratajkowski used to look like an ordinary child. But now she’s HOT and is paid to spend time with the likes of audio-perv Robin Thicke and sockless gimp Pharrell Williams. We’re not entirely sure what the point of this story is. Maybe children who are one day going to become HOT women should really be making more of an effort. How can the Daily Star effectively cater to their audience of seven perverts if they’re not able to effectively objectify all eligible females?

The news is complicated, isn’t it? It brings on a little headache, doesn’t it? Yes, I know, have a lie down. Shall I pass you the Femail section? Yes, you know, the nine pages of toilet drivel the Daily Mail churns out once a week, to gently stimulate tiny lady brains in a non-taxing fashion? Here you are! This week’s highlights include a piece about whether you should let a robot teach your children, a helpful pull out about settees and this breaking news – oh Good Lord, I shouldn’t have showed you that, here’s your smelling salts – please don’t worry, no one will take John Lewis away from you, they make cushions like no one else, don’t they. Please don’t be upset, here’s your delicate tapestry to work on. That’s a good girl.

So, paddling about in that puddle of brain-gunk was about as much fun as passing a pine cone. We do apologise for bringing it to your attention, but a problem shared etc… Anyway, let’s all have a pint, it is Friday after all. Until next time long-suffering darlings, Flora and Iris xx