Lawks guv, it’s only gone and got to Friday again. We’ve been trawling the dark, dark abyss so you lovely lot don’t have to. And we strenuously advise you not to, unless you want your brain to melt into a steaming puddle of incredulity. We find it quite staggering that anyone, anywhere could actually write this toss and not go home and make oneself cocktail stick sandwiches as a penance for being so morally, spiritually and intellectually bankrupt. However, they did and we’ve taken the piss…behold… 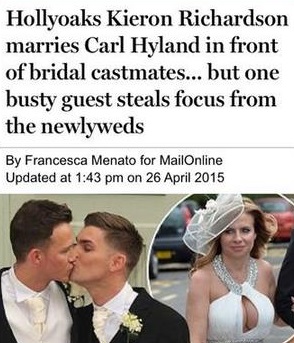 Hot from the Daily Mail news desk comes this breaking story: a bloke off Hollyoaks got married, but a guest upstaged the proceedings by being ‘busty.’ Yes, this random woman – the Mail couldn’t be arsed to find out who she is – stole the limelight and basically ruined the entire ceremony by bringing her tits along. Couldn’t she have just left them at home, with the kids and the German Shepherd? The entire day was ruined. RUINED!

9) Woman stands next to other woman 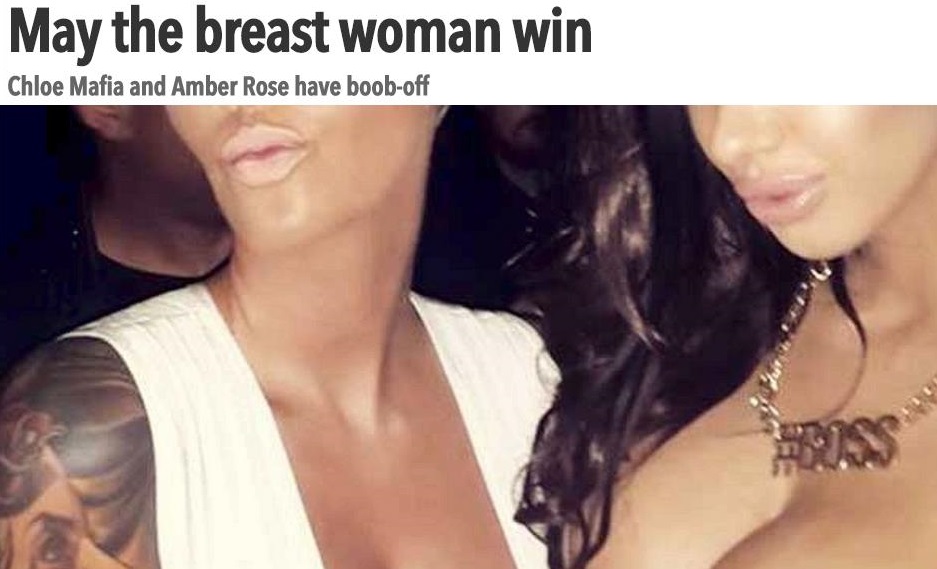 This week, two women I’ve never heard of stood next to each other. That The Sun managed to wring out a full article about this is commendable. I know that how hard that can be, I’ve done GCSE Geography. I’ve been forced, under exam conditions, to gush about the bottom of a river I’ve never heard of, so I know what it is to churn out 900 words of experimental turd about absolutely nothing. I sympathise.

However, I must dispute that a couple of women standing near each other constitutes a ‘boob-off.’ Or perhaps I’m wrong? Maybe I’m unconsciously competing in boob-offs every day? If so, I had a major boob-off at the bus stop earlier. And don’t even get me started about the Dorothy Perkins queue yesterday. It was a HOTBED of floral wrap dresses and tit-filth.

Sadly, the Sun’s attempts to engage readers in tit-chat fell on deaf ears: ‘what do you think of Chloe and Amber’s boob-off’ they wrote, ‘tell us in the comments below.’ Alas, no one replied. What a shame. It’s as if even Sun readers are sick of this shit.

It’s official: it’s thoroughly unlikely for groups of women to ooze timeless elegance if their COMBINED ages exceed 150. So dance troupes, hen parties, sports teams, all female political shortlists and The Saturdays beware, should you wish to ooze timeless elegance, (which obviously is a pressing concern for us all) you need to either just hang out only with small children, strike out alone (like Posh Spice) or stop time. That’s what feminism is all about, right Daily Mail? Choice! 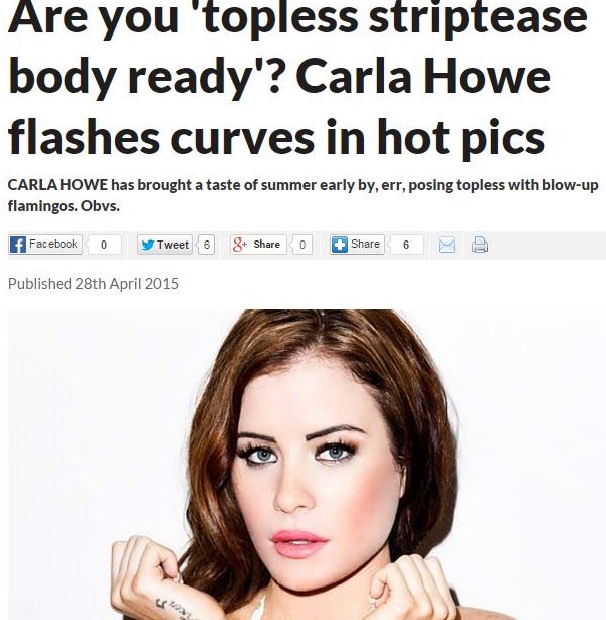 Ah, the Daily Star. Instead of stumbling into the maelstrom surrounding the ailing Protein World ad, they’ve instead nicked the prototype in hope of being that little bit more offensive to women. They’ve turned it up to eleven, so to speak, by posting racy photos and going on about being ‘topless striptease body ready.’ It’s all so bor-ing. And it can’t even be successfully offensive, since the Star has seven readers, and only five of them can read, so it really doesn’t have the reach, you see. Better luck next time Desmond.

Oh this is too, too sad. It’s like one of those awful articles about poorly donkeys that I just can’t bear to read. You see, there are so many pitiful chaps out there who have suffered bitter disappointment in their mail order brides. Complaining about the shortcomings of the women they purchased, in the way that a lesser man might complain about a dented tin of creosote or an ill-fitting coat, these disgruntled gents air their woes in this sympathetic Daily Mail (rim)piece. ‘I could always tell she was uncomfortable. It seemed like she was just doing a job’ lamented one disillusioned nob-end about his sex life. ‘She would cook, clean, offer sex, whatever, pretty much what you want from your wife’ confided a fellow arsehole, ‘but the passion, emotion, warmth, everything that makes a marriage actually work was lacking.’

Honestly, women, eh? You’d think that, after being dragged away their family, friends, culture, home and country, the least these women could do is fake it a bit. What are these poor blokes to do? You know what abroad is like – there’s no consumer rights; no Which? magazine or Martin Lewis to fix your woes. There’s no Thai bride ombudsman. I blame all foreigners. And British women for being so career driven and selfish. I mean, what’s the average sweaty, friendless 67 year old misogynist got to do to get a shag and a Pad Thai around here? 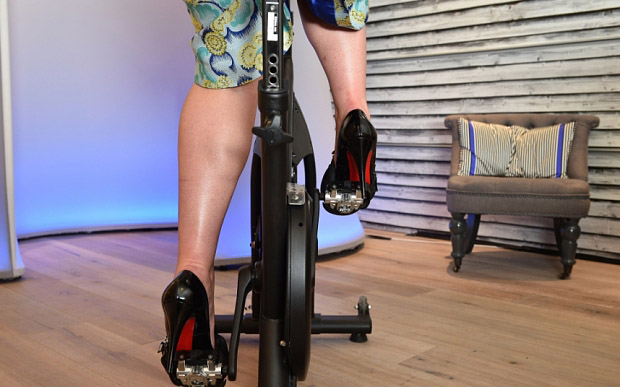 Oh for the chuffing love of chuffing chuff, just chuff off.

Women. If we’re not having vaginas, bleeding all over the place and making impossible demands like having the vote and being treated with respect, we’re charging around Europe destroying hitherto happy familial relationships. Or so says Wayne Lineker. Who looks like a Satsuma.

Wayne doesn’t get on with Danielle and blames his brother’s second wife for ‘changing’ him. Into what, we’re not sure, but our money is from a smug shitweasel into smug St. Tropezed shitweasel. Either way, Wayne doesn’t like it and thinks that the best way to deal with it is in a national newspaper, as is customary when having a bit of a tiff with a loved one – especially a tiff caused by a woman and her magical man-changing powers. Maybe Danielle is a witch who has so thoroughly bedazzled our Gaz with her wanton charms and nice dresses? He is merely a shell of a man, a faintly orange shell of a man.

In other news, once Wayne is done getting angry, the Daily Mail try and sell you Danielle’s clutch bag, which is only £990. And that’s a lot of gin. Drink enough, and you’ll forget you read this. Drink £990 worth, and you’ll be dead. Either is better than this dismal load of bumcheese. 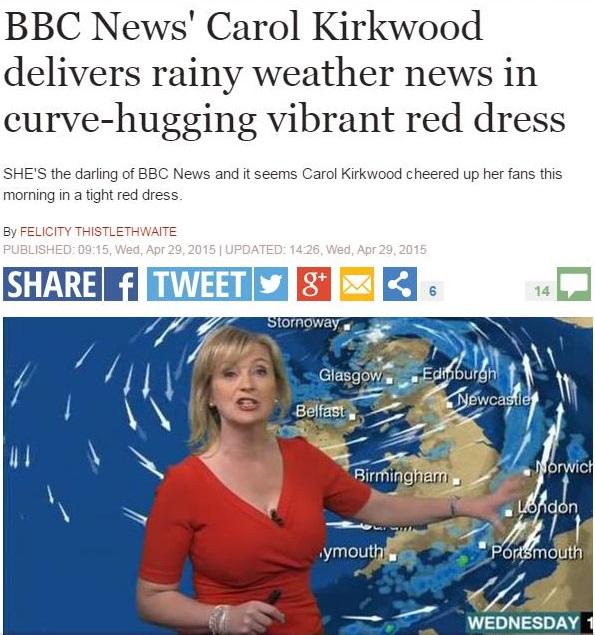 Dear readers, I must review this Express article quickly, before it evaporates into air and disappears forever. So vapid and insignificant it is, it may simply dissolve at any given moment. I’ll be swift.

The story goes like this: a telly weather person predicted the weather.

However, if you’re a bored pervert in the winter of its life, you might also notice that ‘Carol wore a red dress with a wrap-style front showing off a hint of décolletage. Her microphone was plugged in at the nape of her dress, possibly pulling the neckline down showing off a little more than intended.’

Well! I didn’t realise that Minxy Kirkwood wore her microphone as a sex aid to excite elderly tories. Pedestrian moron that I am, I presumed she was wearing it in order to be heard. So, y’know, we could hear about the weather. But, no, that yellow-haired conjurer of rain will not be satisfied until she’s mystified us all into a weather beaten sex frenzy.

What a piece of work is a woman! How fair of decolletage, how lusty of forecasting.

On Sunday, a woman put on a dress and went to see a football match. Give a shit? Neither do we. But if you work on the Mail and have long, dull hours to fill writing tragic old wank about a woman in a posh family having a baby, then you’ll give it a punt.

Amanda Holden, so famous that we can’t remember why, wore a ‘figure hugging dress’ and a ‘figure hugging white coat.’ In an article which used around sixty-nine pictures of said dress and coat and the words ‘dress’ and ‘coat’ were rearranged endlessly, until readers, bored to pointless tears, wept vomit.

1) Woman has visible undercarriage where her shame should be

Quick everyone stare at Kate Hudson’s fanny. LOOK, THERE IT IS. Can you believe it, she has lady-parts. A lady with lady parts, un-clunging-believable. Despite women being presented by our lovesome press as self-aware fuck-toys, we’re still not allowed to actually have bits to fuck with and, god forbid, like them. I mean, IMAGINE if women were as proud of their labias, clitori and such, as men are of their wangs…all hell would break loose. Women bragging about the size of their love-beans in the bogs, putting socks in their pants to ‘bulk up’ their fadge-packages. But phew, thankfully there’s none of that, we are required to pretend we don’t have genitals or, if we do, and they’re at all attention-seeking and protuberant, maybe have the ‘excess’ trimmed or lasered off. Gosh fancy being encouraged to have one’s genitals mutilated…thanks Jessica Earnshaw of the Express for ramping up the profit-driven shame stakes. Can you spell s-o-l-i-d-a-r-i-t-y? Didn’t think so.

How was that for you? We’ll hazard that you’re experiencing anything from a mild feeling of ennui to full blown nihilism. We’re feeling slightly crestfallen after our weekly reminder that being women, we are basically a bit shit. Right, our budget is slightly less than Lineker’s wife, but how much Hendricks can you get for £9.90?