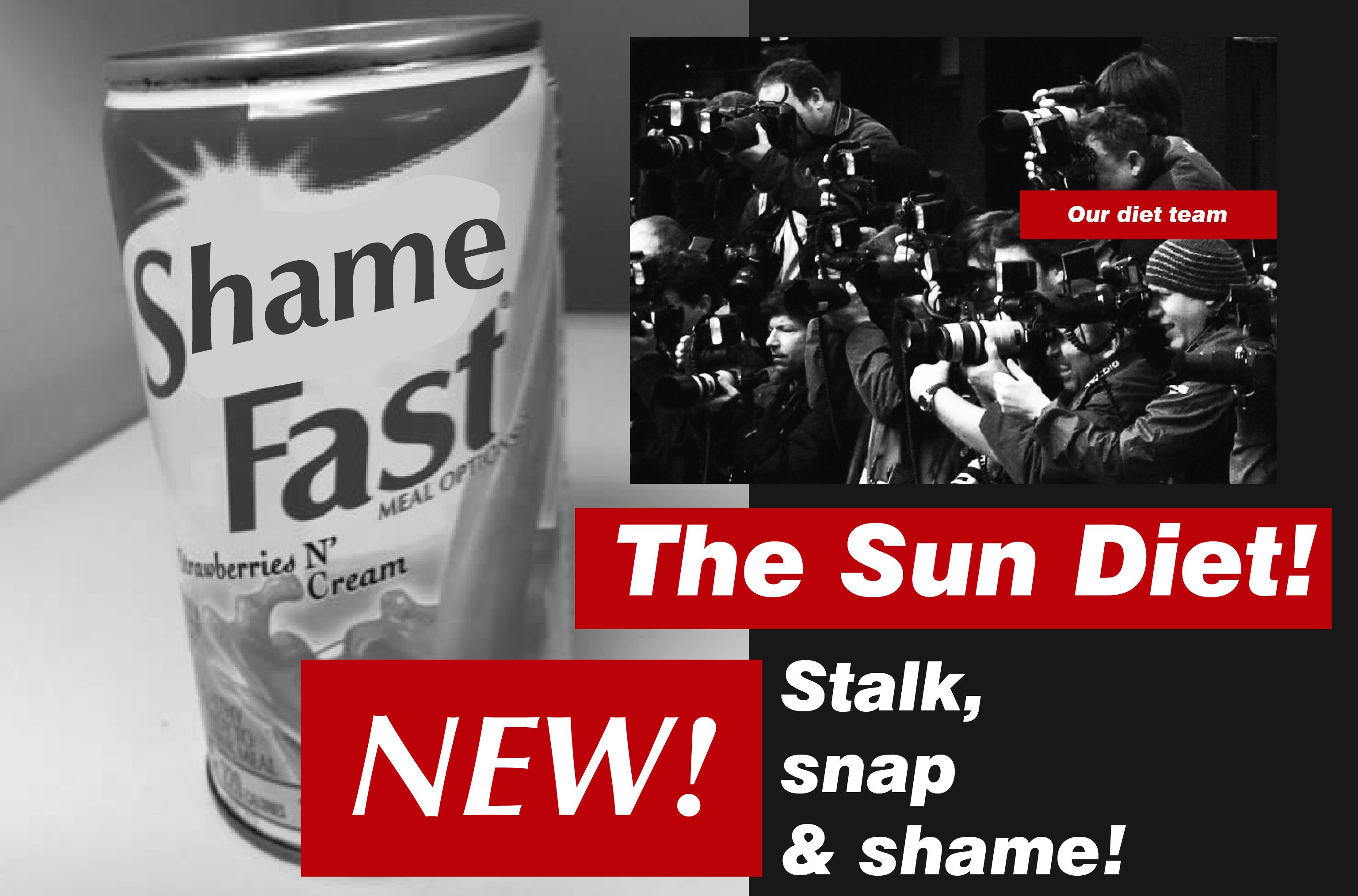 A guest blog, written by our mate Maud Flannel.

Contrary to popular opinion, I don’t hate The Sun; I hate all sexist media. I’m quite ‘equal opportunities’ like that. However, as much The Mail et al may hate women and wear that hatred on their sleeve/website/sidebar of shame, I can’t remember them being quite as hypocritical as those geniuses were over at The Sun this weekend. 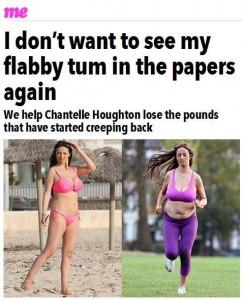 The Sun ran a story about how they’re helping Chantelle Houghton “lose the pounds that have started creeping back” – isn’t that sweet of them! If you don’t know who Chantelle is, she’s essentially a phenomenon created by the media in order that “high brow” journos can tut about people being famous for being famous, and “low brow” media can metaphorically (or possibly literally) rummage through her bins, and spew out the contents in order to increase their readership. She is, in every conceivable way, a woman in need of a hug and someone to tell her that it’s all going to be alright, before topping up her vat of wine.

Anyway, back to the amazing do-gooding over at Sun Towers. Poor Chantelle, like many of us, put on some weight after having a baby and splitting up with the child’s father. Here’s where the story differs from most of us… She was then photographed and had those photos published in the tabloids. Imagine, being “fat” (she was never fat and what does fat even mean anyway) in public, the horror, the horror! But it’s okay, because Chantelle then went on The Sun diet and lost 2 stone.

Hurrah, she can now be photographed in a bikini again without everyone vomiting into their cereals at the sight of her. But, oh no, Chantelle has put on TWO (count them) TWO pounds!!! Her response: “I keep thinking of what the photos will look like if I hit the beach. I don’t want to see my flabby tummy in all the newspapers again.”

So, in essence here’s the message of Chantelle/The Sun Diet’s story:

“I went on a Sun diet because The Sun called me fat & then they called me stunning, but with two extra pounds, & I might be called fat again by The Sun, so I went back to The Sun & now they’re helping me with my ridiculously low self esteem, which was caused by The Sun. Thanks The Sun, I now have a borderline Sun endorsed eating disorder”

Thank god Chantelle has The Sun in her corner!

Just to pop this into a bit of context, The Sun once claimed that they were all about promoting healthy bodies via Page 3 (which also now fights breast cancer, because 20-something women have always been Page 3’s target market, but that’s a different story) because the models represent “natural beauty” and they’re “very healthy”. I’m not going to dispute that, because No More Page 3 already did it here – in summary, the models represent around 5% of the population on body type, and even less when you consider things like skin colour, age, physical abilities. Anyhoo, The Sun really, really thinks it’s all about positive body image, yet they used this quote from Chantelle: “Now is the time for us girls to really knuckle down and work hard to get our bodies in shape. We wear less clothes in the summer and our skin is exposed.”

So, in essence, what The Sun is really saying is this… Ladies, flash as much flesh as possible, but only if you look how we say you should look and, if you don’t look that way, be ashamed and follow our diet (by signing up to Sun Plus with money). Which is totally the message of all those who work on promoting positive body image.

Thanks The Sun *phones Papa John’s*

NB: the author of this piece is rubbish at body image and is now beating herself up for her Papa John’s, thanks for that All The Media.