Greetings dear readers! Have you recently seen something infuriating? Have you read an article that has reduced your faculties to semolina?  Has a product or service that promised eternal salvation been a puddle of utter turd? Has an incident filled you with buckets of disappointment at the state of the human race? Yes? Well, fume in silence no longer! Make a nice cup of peppermint tea, crack out the party rings and tell us all about it. Submissions can be daft or serious and can take the form of articles, open letters, poems, drawings, cross stitch creations…we’ve run out of suggestions, but you get the idea – wang ’em over to: floraniris@gmail.com.

This week, our pal Nurse Lard responds to that shit Spectator article by Charles Moore, entitled ‘Do Yvette Cooper and Liz Kendall look like leaders?’ Oh nob off Charles. 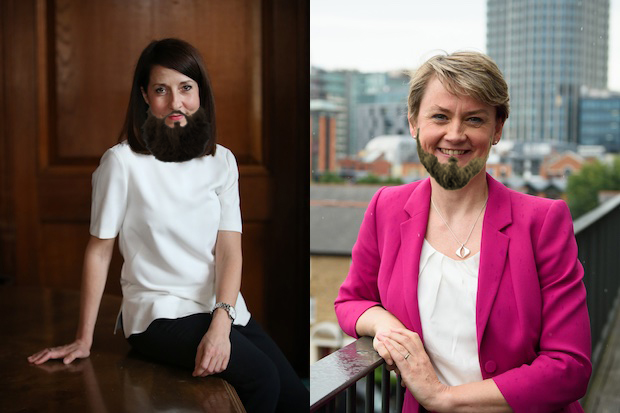 No, not because of the concerns over “entryism” or the possible culling of members and supporters who might be too socialist for the party founded by….a socialist.
No, it’s because they have bloody well chosen the wrong women! At least this is the call of Charles Moore in 1950’s throwback, The Spectator this week.

Well…you might ponder….. as a self-respecting feminist of the 20th century, the man has a point. I, for one, would quite like to vote for a woman leader, but am disappointed that the best of them seem to be in the running for deputy or waiting for a vacancy as London Mayor.

But, ladies, we are barking up the wrong postman’s trouser leg here. We’ve missed the point completely with our silly lady brains.

You see, the problem is nothing at all to do with lack of vision or Tory light policies, oh no. It is all because of the frankly appalling state of candidates Cooper and Kendal, neither of whom, we are told, are likely to get as much as a semi-on out of any self respecting backbencher.

Good grief, you might be thinking, what sexist bilge is this? BUT, hold on to your pantyliners there for a minute, because I’m afraid they have this whole thing backed up with hard evidence.

It seems Mrs Thatcher’s victory in 1975 was nothing to do with her terrifyingly strong leadership skills and suitably frighteningly cold, get-the-job-done persona. Nah, it was in fact entirely down to the fact that “lots of older Tory backbenchers fancied her.”

Now wait, if you can hold onto to your breakfast for just a minute there (you’re a better woman than me), you need not worry. We can just start this whole leadership thingy all over again from scratch, and put the whole debacle right because, thank goodness, Charles (bless his ironed socks) has enlightened the Labour party with all the information it needs to chose the right woman for the job.

So Labour women MPs, put down your clip board, forget about your achievements to date, about the need for charisma or any silly lady policies you might be dreaming up about social justice, equality or any such thing.
If you identify yourself of the female persuasion, before you even THINK about putting yourself forward for leader, you’d better just take a minute to check whether you meet these vital requirements for the job (I have bullet pointed them, in case you wanted to break them up in between all of your vital domestic chores; you can thank me later….when you’ve done the ironing):

I’m not completely certain what “it” is or what this means, but I think holding onto “it” might have something to do with a high fibre diet, so buy in some All Bran.

I have been thinking hard about the interpretation of this one, and the last time I disturbed somebody with my sexiness was, I think, in 1995 when, whilst tending to a patient, I got something in my eye and accidentally winked at one of the senior doctors whilst bending over to pick up a bed pan. I managed to counter this unfortunate faux pas by spending the rest of the shift feigning a nervous twitch. Of course, there was that referral to occupational health for psychological assessment, but I think you’ll agree it was worth it. A woman can’t be too careful!

I think this might be something to do with The Lord of the Rings, which none of us will have read, because it’s a man’s book

I’m so glad they reminded us that it was the age of equality, because I was starting to worry up until this point of the article that we might still be living in some horrifically unequal society. You know, one that sees fit to judge female politicians on their fuckability as opposed to, well…. whether or not they could run the nobbing country.

Ditch the usual head and shoulders shot, and consider a candidate leaflet featuring you tied to a post on a cliff top in a long frock awaiting rescue, as per Jason and The Argonaut’s circa 1963

2.”more provocative and sassy” like that woman off of “‘Allo ‘Allo” who liked to insinuate an unexplained sexual act involving a whisk, or somebody on BBC breakfast that your old friend Charles here is so impressed with he can’t even be bothered to Google her and find her ACTUAL NAME.


Well there we are. The vital information all our Labour women need to put themselves forward.

Where would we be without Mr Moore’s words of wisdom?

Well, probably sort of where we are now really, with a leadership election focused mostly on policies and leadership skills, and what’s the point in that? After all, we are told Labour leadership voters seem to  “prefer a man with a dull beard.” so perhaps Liz and Yvette could work on cultivating one of those instead?

You can find Nurse Lard on Twitter @LisaLouClarkey and her blog is here.