We’re very excited that the fabulous Cath Janes has written this guest post for us. Many a beverage was choked on reading her hilarious rage-filled Kraken Wakes blogs. She doesn’t write so much these days, but is no less creative. You won’t find her at a laptop, but lurking in her sewing shed, where she makes bright, glorious, irreverent crafts. She loves it so much she attends craft fairs, but all is not well…

Let me breathe into that paper bag, will you? You see, I went to a large craft fair last month. Yet instead of leaving with new thread I left with the urge to round up all of the women, Handmaid-stylee, and holler at them until they woke from their stupor. That’s because every stand was rammed with post-menopausal women making fairies, cottages and enough ‘home sweet home’ motifs to form a black hole of broken feminist hearts. What in the staggerment of patriarchal lunacy was going on?

Three years ago when I started my sewing business, Kraken Kreations (www.krakenkreations.co.uk), it was because I was sick of women being offered the ubiquitous ditsy floral by the high street. I decreed to work only in unapologetic loud prints and feminist messages. So when I ventured into the world of craft fairs I expected to see other women rampaging with fluorescent yarn, screaming prints and individual designs. Instead I got called a “feminist bitch” for suggesting alternatives to pastel pinks and last month’s craft fair was the blue-for-a-boy straw that broke this camel’s back. 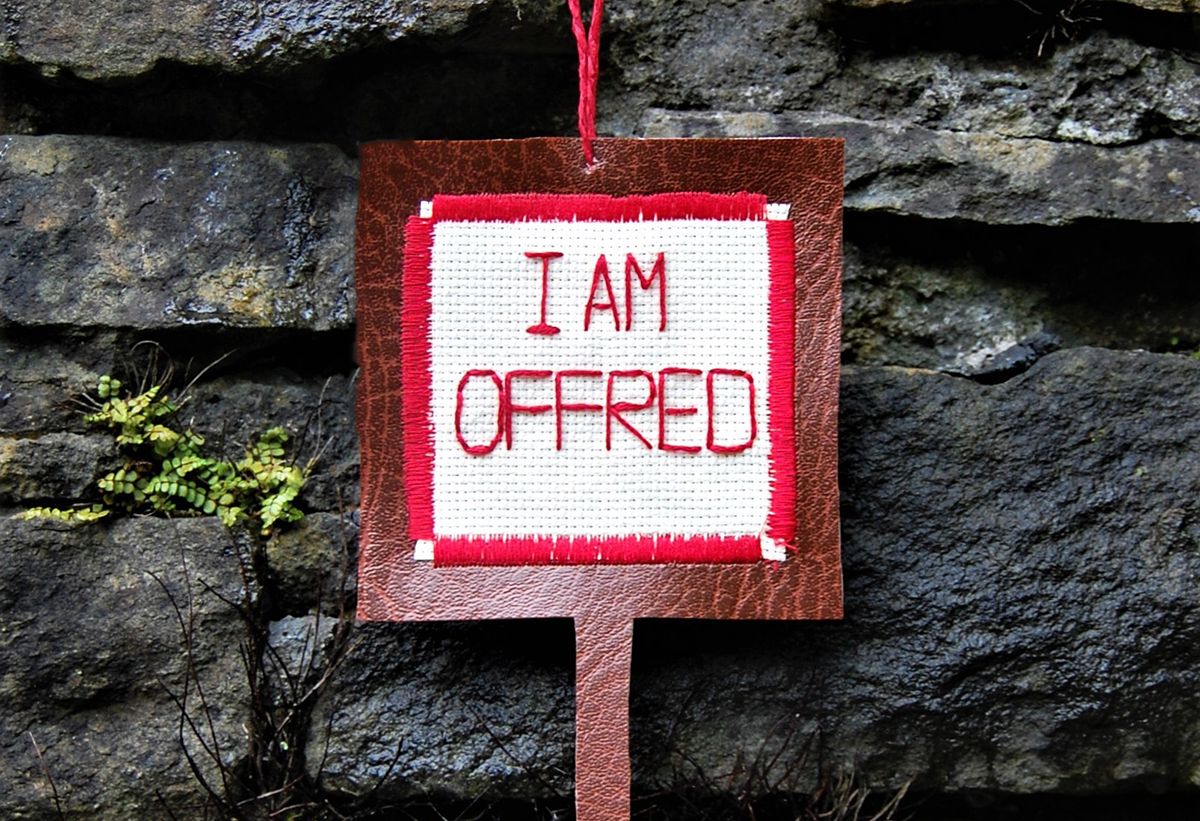 In the entire fair there wasn’t a single item of craft that didn’t include a magical creature, a heart or a domestic reference. I thought I was having a kitchen-based stroke. And while some women long to give voice to woodland nymphs through the medium of alpaca wool I refuse to believe that all of those women at the fair did too. That’s why I think the patriarchy has played (another) trick on us.

Look at it this way: sewing, knitting, crochet, felting and paper crafts were traditionally done by women in the home, right? So it was largely men who owned the businesses that mass produced the items needed for these skills and when women used these skills it was predominantly on behalf of their families. That’s why, in 2017, you can still walk into a random haberdashery and find embroidery kits of nothing but bonneted women and nursery motifs. And, OK, women buy them, but that’s because there is nothing else on the market and societal pressure on post-menopausal women is so family oriented that they’re supposed to commit hara-kiri when their last child leaves home. That’s my theory and it’s better than believing that these women are really Tinkerbell-obsessed toddlers trapped in the bodies of adults with collapsing pelvic floors.

And you know what made me so enraged at that fair that my own mother had to fetch me a cuppa? That these highly-skilled women are so much better than shushed-up incubators for kitsch. Imagine if they used their craft to represent their own lives instead? It’d be a collective voice loud enough to make your cochlea beg for mercy. One stroll around a craft fair would alert you to everything from childbirth-based PTSD and widowhood through to workplace inequality and domestic violence. You wouldn’t just come away with the urge to try a new crochet stitch. You’d come away with the urge to blow up the House of Commons and make off down the Embankment with its ceremonial mace (ideally leaving a trail of knitted vaginas in your wake).

Yet because post-menopausal women are collectively dismissed as husks no-one sees them as individuals with their own diverse aesthetics. Well that idea needs to be shoved right up a pixie’s arse. This should be the very time when women create whatever truly represents them. I mean, can you imagine millions of retired men being encouraged to take up painting yet only producing images of cars? So why are women expected to produce only scenes that even my nine year old has left behind?

I also embroider images of human anatomy, often while chilling in coffee shops. A few months ago a group of elderly women gathered near my table and got out their delicately-shaded knitting. One by one they came over to see my work of a uterus, one even asking me to explain how the cervix worked. The overwhelming comment was “I never thought of sewing anything like that!”. And that’s exactly my point. No one ever told them that they could. Now, who wants to embroider a handmaiden and set fire to it? I know millions of older women who would be perfect for the job.

All artwork by Cath Janes – visit her shop for more info: www.krakenkreations.co.uk